In preparation for this award, Dr. Bill Oakes, 150th Anniversary Professor, Director of the EPICS Program, and Professor of Engineering Education, shared with us his rationale statement written for Phil's nomination. While there are numerous supporting letters detailing his mentorship and innovative work, we asked Dr. Oakes if we could share his rationale with our readers, as it explains what a lifetime of achievements looks like for a much deserving individual. 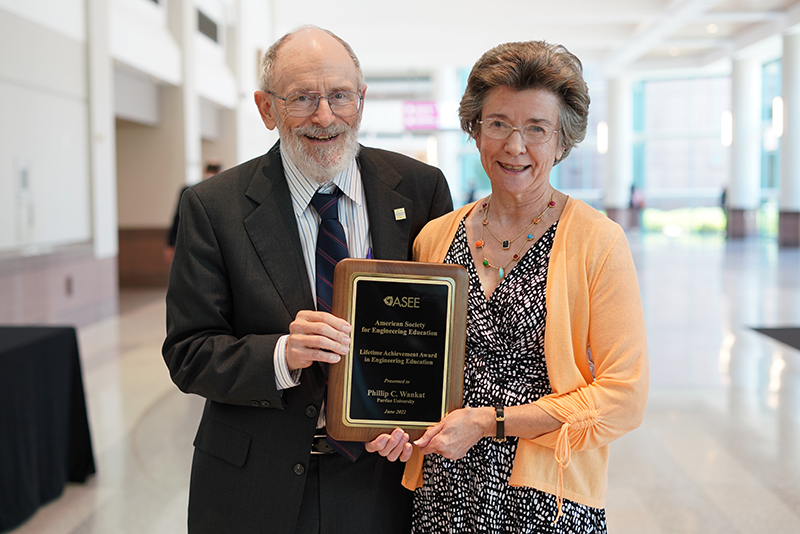 Phil Wankat was an educator ahead of his time, contributing to engineering education at Purdue University, ASEE and globally for five decades.

Dr. Wankat began his service to ASEE in 1979 in the Chemical Engineering Division holding every leadership position within the division as well as society-wide committees including the Fellows selection committee.  He was a recognized researcher in chemical engineering who sought special permission to earn a master’s degree in education in the late 1970’s.  He wanted to have more of an impact in education and our profession has benefited tremendously from his expertise and dedication to serve engineering education.  He is also one of the leaders who have moved our field to an evidenced-based approach to curriculum development.

At Purdue, Dr. Wankat has been a leader through his teaching and as an administrator.  He has been recognized by many awards at Purdue including being included in the inaugural class of the Book of Great Teachers.  He has been recognized by many awards over his long career including the Potter Award for best teacher in the College of Engineering at Purdue University in 1979,  the Morrill Award, Purdue University’s highest faculty award, in 2016.

Jane Daniels, former Director of Women in Engineering and one of the founders of WEPAN noted in her support letter that “Phil was one of the first engineering faculty members who understood the important relationship between educational methods and diversity…It was in this role (Head of Freshman Engineering), that he made the most significant contribution to the advancement of Women in Engineering Programs nationwide”.  He co-authored what Richard Felder describes as” the only existing book on engineering pedagogy” Teaching Engineering,  which has impacted thousands of engineering educators, including this nominator. Dr. Susan Montgomery, in her letter of support, noted his course and book impacted her in the early 1990’s and how she used it to impact more than 500 others herself. She and others have been inspired and equipped by Dr. Wankat to impact other faculty and students.

Dr. Wankat has been a scholar, both in the technical area and education.  In the mid 1990’s he was the second most cited author in the Journal of Engineering Education.  He has been in the leadership of the ASEE Chemical Engineering Education Journal as the editor or associate editor from 1995 to 2019 as noted in  Don Visco’s letter.  Dr. Wankat found many ways to contribute to ASEE and the larger society.  For example, he co-authored a featured column on teaching in Prism Magazine for eight years.  He also published the book The Effective, Efficient Professor: Teaching, Scholarship, and Service, Allyn and Bacon, Boston, in 2002, which has been widely used in engineering workshops to help new professors survive and thrive.

Nationally he was recognized with the ASEE Chester F. Carlson Award in 1990 and ASEE Centennial Certificate of Recognition in 1993.  He has been active within broader engineering education and AICHE recognized him with a dedicated session at their Annual Meeting entitled “Inspired by Phil Wankat” in 2013 where others who have been touched by Dr. Wankat shared his impact.   He has impacted his students to achieve great things in their own careers.  He has inspired colleagues who are leaders in our field.  He was an instrumental mentor as we created the first School of Engineering Education.  Dr. Wankat has been a champion for education reform and diversity for decades.

Personally, Dr. Wankat was the Head of Freshman Engineering when I was pursuing my Ph.D. in Mechanical Engineering and recognized as a leader in our field.  The time he spent with me in the mid 90’s was instrumental in my shift to more focused on education.  Freshman Engineering became Engineering Education in 2004 with his mentoring and coaching.  His success was a major factor convincing the administration that we could be successful.  Finally, Phil wrote the nominations for the first two winners of this award, Rich Felder and Jim Stice.  He was a peer for these giants of our field and is worthy of being recognized alongside them. 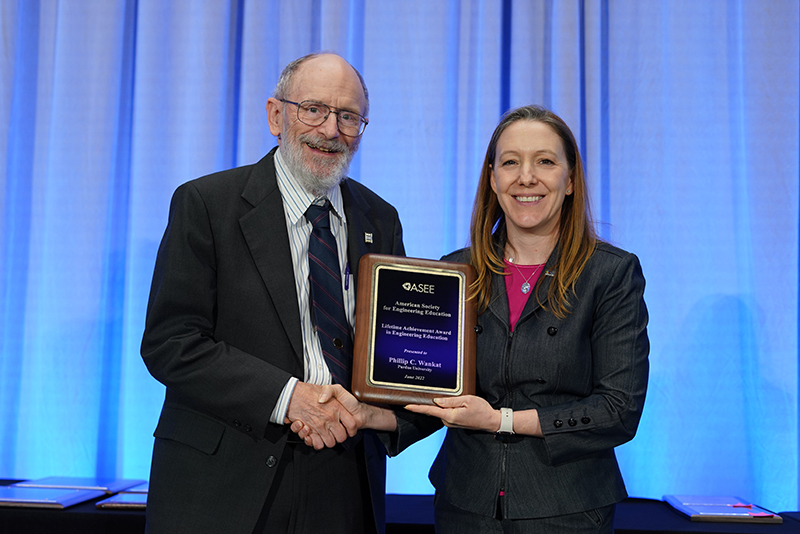 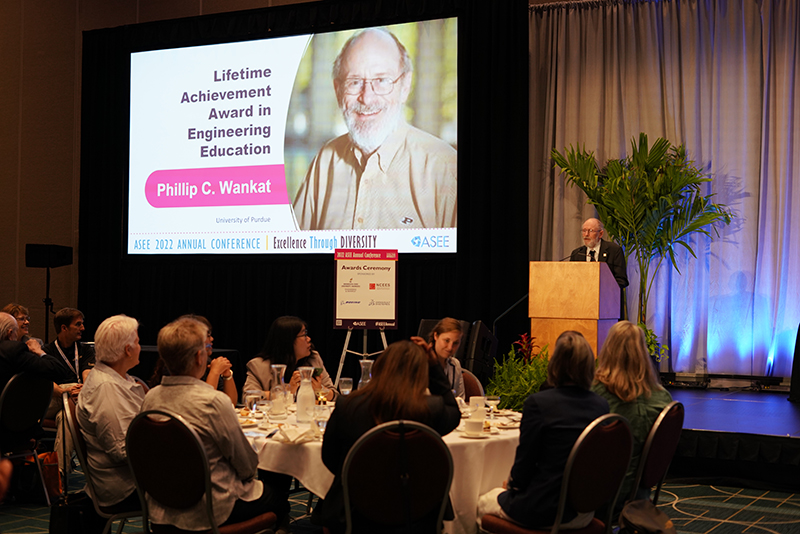 Dr. Wankat provides a few closing remarks for his colleagues in attendance 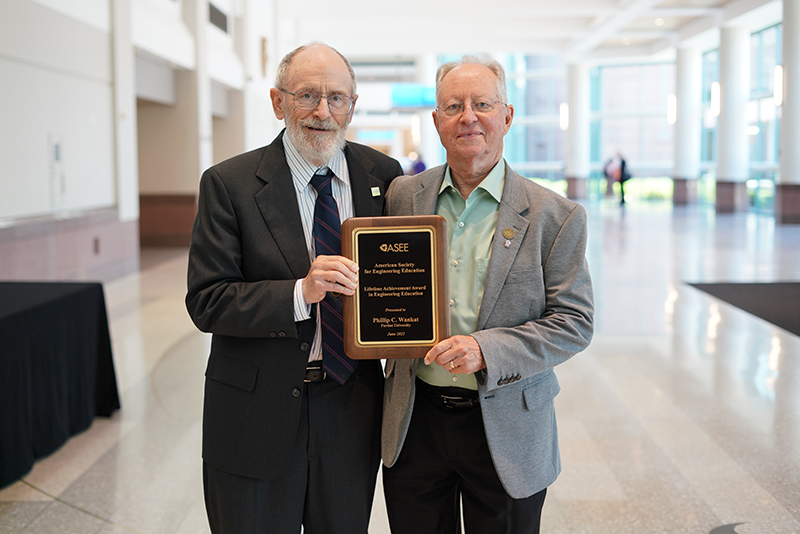