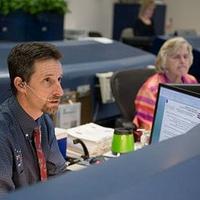 Chosen as a NASA flight director in 2008, Gary Horlacher served as lead shuttle flight director for STS-134, Endeavour’s May 16–June 1 flight—its last, and the next-to-last of the entire shuttle program. Horlacher graduated from Purdue in 1989 with a degree in systems engineering through Interdisciplinary Engineering. Fresh from a series of post-mission debriefs, he talks here about his role at NASA and about Endeavour at the close of the shuttle era.

What does a NASA flight director do?

HORLACHER: A flight director is like an orchestra conductor—the central point in mission control. The flight director has overall authority and responsibility for crew safety and mission success and makes decisions and risk trades when conflicts arise. The flight control team is comprised of experts responsible for certain parts of the vehicle or mission—propulsion or computers, for example—and it’s my job to drive us in the right direction and keep us on track.

How many staff are coordinated by the flight director during a flight?

HORLACHER: In mission control, the front room is what you see on TV. In that room, there are about 15 individuals, and each of those have folks in back rooms supporting them, at even deeper levels of expertise. For a mission during a single shift, there are 50-75 folks involved, and we can also tap into the engineering side of the house—people responsible for handling the details of the spaceship on the ground and getting it ready to fly.

How far in advance is a shuttle mission planned?

HORLACHER: For us, planning for a typical shuttle flight starts about a year in advance, although higher-level planning at the skeleton level starts before that. We pull the lead flight control  team together and work with both the shuttle and station programs to develop a minute-by-minute plan for the mission—the flight plan. The flight plan is the result of a tremendous amount of work, and it's designed to accomplish all the objectives and requirements that the programs have asked us to do.

About three or four months prior to flight, we begin the integrated simulation phase, where  we use simulators to rehearse key portions of the flight—time slices from the flight plan like rendezvous or robotic payload installs or spacewalks. During the integrated simulations, the astronauts will be in the simulator in one building here at JSC, and the flight control team will be in mission control in another building. A separate team called the training team will be controlling the simulation and inserting malfunctions throughout the training session to test both the crew and the flight control team. It is a very effective method of preparing for spaceflight.

How have you used systems engineering as a flight director?

HORLACHER: I’m running the bigger-picture systems, looking across the board and constantly trading off risk versus reward. It’s a very dynamic environment, where you have to make quick decisions based on the information available and the possible downstream repercussions.

How did you settle on systems engineering as a student at Purdue?

HORLACHER: I started off in electrical engineering and realized it wasn’t my thing. I met a Purdue student who had a co-op at Johnson Space Center, and I had the opportunity to go down and get exposed to space program. That was the light bulb for me. After I had visited there, I knew I wanted to be involved in human spaceflight. IDE [Interdisciplinary Engineering] gave me the opportunity to define what I was going to do: I could get aerospace courses and mechanical courses—that’s where the rocketry was—and develop a space systems engineering major. For me it couldn’t have been a better fit.

What were the highlights of STS-134 for you?

HORLACHER: Getting the AMS [Alpha Magnetic Spectrometer-2] to its final destination on the International Space Station—that was an incredibly rewarding moment. It was the result of an international collaboration of about 600 scientists from 16 countries and close to a decade of work. It got activated, the payload was in perfectly good shape, and almost immediately they were detecting cosmic particles traveling through the instrument and were able to identify what kind of particles they were. Since then they have detected billions of particles! We are going to learn a lot about the universe and our place in it thanks to the AMS.

We also conducted the STORRM [Sensor Test for Orion Relative Navigation Risk Mitigation] test. STORRM was developed and installed in record time. It’s a pair of advanced technology sensors that are being designed for future spacecraft to rendezvous and dock in space. We can reduce a lot of risk by testing it in space before you need to rely on it for an actual rendezvous and docking.

Any difficult moments during the flight?

HORLACHER: We had four spacewalks. There’s no such thing as a routine, comfortable spacewalk. Getting the astronaut into the spacesuit—which is like another spaceship—and sending them outside into the space environment is always tense for me. On spacewalk #2 the astronauts were working with ammonia lines with a history of leaking, and ammonia is not a nice material. That was by far the most stressful day I think I had.

Also, during spacewalk #3, the crew was removing some panels to allow them to relubricate one of the solar array rotary mechanisms, and several of the captive bolts released and started to float away! The crew caught a couple, but a few got away—a helpless feeling since it was completely unexpected, and there’s nothing you can do but watch.

What were your thoughts on Endeavour’s last flight?

HORLACHER: It’s very bittersweet. As the lead flight director, I was pretty worried at the time about getting the flight done properly and safely. But I went to the landing and inspected Endeavour on the runway. I can’t believe this vehicle is no longer going to leave the planet. She flew a great mission. She could go up again, but we as a nation have decided to end the shuttle program with no replacement capability ready. And as an engineer, I’m curious how they’re going to get Endeavour to the California Science Center [its permanent home in Los Angeles].

What’s next for you professionally?

Any advice for students who want to work in aerospace?

HORLACHER: There’s a lot of uncertainty with the transition that NASA and the aerospace industry is going through, but there’s a tremendous amount of opportunity. A lot of commercial companies out there are trying to step up and get to low-earth orbit. Some want to fly tourists; some want to get astronauts to the space station. When I came out of school, there was only one place to go: NASA or a contractor working for NASA. Today, a lot of other companies are doing cool aerospace work. Flexibility is key in a dynamic environment. Generally in chaos comes opportunity, and you’ve got to go grab it.