The Mahomet Bridge, built in 1912, was the focus of the first competition at 2015 APSS.

The idea Pedram suggested to excite the bridge laterally is being put to use.

Pendubot, a double pendulum with a base rotor, was the subject of the second competition. The team had to develop multiple active control algorithms to bring the pendubot to upright position. 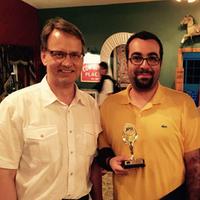 Pedram Hesam received the Championship trophy from Prof. Billie F. Spencer, Jr., the APSS Program Coordinator and a faculty member at the UIUC.
Pedram Hesam, PhD student in structures at the Lyles School of Civil Engineering, and his five teammates were awarded the championship prize at the 2015 Asia-Pacific Summer School (APSS) on Smart Structures Technology, held July 26-August 14 at the University of Illinois.

Pedram Hesam, PhD student in Structures at the Lyles School of Civil Engineering, had won a competitive scholarship to attend the 2015 Asia-Pacific Summer School (APSS) on Smart Structures Technology, hosted by the Department of Civil and Environmental Engineering at the University of Illinois, Urbana-Champaign during July 26-August 14.

Pedram and his five teammates from China, Japan, South Korea and Spain competed against seven other teams on two structural dynamics projects: structural health monitoring of a 75-m long bridge span and structural control of a double pendulum mechanical system.

Pedram’s team won both competitions and was awarded the Championship prize based on their creativity, being the only team that completed a series of tasks within allotted time, and the quality of their technical project presentations.

Pedram also participated and gave an oral presentation on his doctoral research, along with five other Purdue graduate students, at the 6th International Conference on Advances in Experimental Structural Engineering (6AESE) and 11th International Workshop on Advanced Smart Materials and Smart Structures Technology (11ANCRiSST) joint event held on August 1-2 during the APSS.