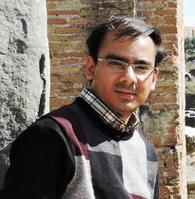 Adnan Rajib, a PhD Candidate working with Dr. Venkatesh Merwade in the Lyles School of Civil Engineering, has won the 1st Prize in the 2016 Annual ASFPM Student Paper Competition.

Adnan Rajib, a PhD Candidate working with Dr. Venkatesh Merwade in the Lyles School of Civil Engineering, has won the 1st Prize in the 2016 Annual ASFPM Student Paper Competition.

In his paper, Adnan's team proposed a hydrologic-hydrodynamic modeling system that was executed for the vast 490,000 square km area of the Ohio River Basin in the United States, producing river discharge information for 100,000 river channels for the past 75 years. Zhu Liu, another PhD student in Dr. Merwade's research group, showed the utility of this modeling system in producing flood inundation maps. I Luk Kim, a PhD student working in the Rosen Center for Advanced Computing, showed the architecture of a dynamic online interface built upon Purdue's WaterHUB platform through which Adnan's model-generated information can be instantaneously disseminated to the public domain.

"Even in this modern era, a fairly large portion of our nation's river system are ungauged. On the contrary, we have seen how the frequency of damaging flood events has increased in recent times," Adnan said. Dr. Merwade mentioned, "Our research is destined to provide information on discharge and possible flood inundation extents in near real-time for every river channel across the Mississippi Basin such that the emergency responders can allocate their resources more efficiently in case of a real flood event. Besides, our model-generated long-term data repository along with the new web interface of data sharing and visualization will augment climate/land use change research, most importantly, classroom environment-water resources education."