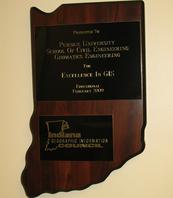 On June 6 – 7, 2008, heavy rainfall of 2 to more than 10 inches fell upon saturated soils, adding to already high stream flows from a wetter than normal spring in central and southern Indiana. The heavy rainfall resulted in severe flooding on many streams during June 7–9, causing three deaths, evacuation of thousands of residents, and hundreds of millions of dollars of damage to residences, businesses, infrastructure and agricultural lands. In all, 39 Indiana counties were declared federal disaster areas.  To make informed decisions, timely flood data were needed by federal, state and local agencies in meeting mission requirements.

Jie Shan, Associate Professor at Purdue’s School of Civil Engineering, Geomatics Engineering, and his team produced flood maps and a Google Earth application for Indiana using Landsat satellite images as the primary data source. The images were acquired on June 11-12 2008, during the height of the flooding period and made available courtesy the USGS. Object-based image classification techniques were used to extract the water areas from the imagery. Basic framework data layers, including topographic elevation, city and county boundaries, road centerlines and hydrography were overlaid for reference. The stream gauge data used to determine water depth for June 11, 2008, were acquired from USGS/NOAA and the locations of these gauges were depicted on the Adobe flood maps. For comparison, the water levels at near to below normal stage, from June 2007, in portions of western Indiana, were also detected from Landsat images and shown on both the Adobe and Google Earth applications.  This information was made available to INDHS and other emergency management officials who were coordinating the disaster response and recovery efforts.

These framework data layers, Landsat images, high-resolution aerial images and most importantly, flood inundation polygons, provide a quick-look flood damage estimate for Indiana Department of Homeland Security, city/county emergency managers and other state, local and federal agencies. Having Adobe-formatted inundation maps and a Google Earth application allows users, many of whom do not have a GIS background, a choice between a static map of the state and a user-defined area of interest, respectively.  Access to user-friendly quick-look flood inundation data provide officials with information they can use as they mitigate, respond and recover from flood disasters.

For maps and a link to the Google Earth Application, visit https://engineering.purdue.edu/CE/floodmaps.