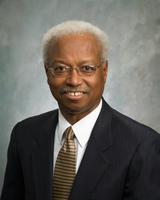 Mamon Powers, Jr.
Mamon Powers, Jr. (BSCE '70, HDR '14) has been named 2019 Engineer of the Year by the Indiana Society of Professional Engineers for his many contributions to civil engineering and the construction industry.

Mamon Powers, Jr. (BSCE '70, HDR '14) has been named 2019 Engineer of the Year by the Indiana Society of Professional Engineers for his many contributions to civil engineering and the construction industry.

Mamon is chairman and CEO of Powers & Sons Construction Company founded in 1967 by his father, Mamon Powers Sr. (d. 2001). The company's headquarters are located in Gary, IN, with branches in Indianapolis and Chicago. His wife, Cynthia is the owner of Century 21 Powers Realty Inc. in Gary.  Their son, Mamon III (MBA Management Purdue 2005), is executive vice president and also president of the Indianapolis office; their daughter, Kelly Baria (BSCE Civil Engineering Purdue 1998), is the director of business development.

Mamon has been in the construction industry for more than 40 years. He began his career with the American Oil Company (AMOCO) and joined Powers & Sons in 1971. He served as the company's treasurer until he was named president in 1987. Under Mamon's leadership, the company switched its focus from residential to commercial and industrial construction and grew to be one of the largest African-American owned construction companies in the country.

He is a registered Professional Engineer in Indiana and is a member and former president of the Calumet Chapter of the Indiana Society of Professional Engineers. He is a past president of the Calumet Builders Association; a member and board member of the Indiana Associated General Contractors of America; a member and former chairman of the Board of Trustees of the Construction Advancement Foundation of Northwest Indiana; member of the Calumet Indiana Chapter of the National Association of Minority Contractors.  It is clear that he, through his untiring efforts throughout his career, has had a major influence on the engineering and construction industry.

Mamon served as board chairman for Methodist Hospitals. He served on Purdue University's board of trustees from 1996 to 2011, for the last two year serving as vice chairman. In 2014, he was awarded an Honorary Doctor of Engineering Degree from Purdue University. In 2015 Mamon and Cynthia were both awarded honorary degrees from Ivy Tech Community College. In 2019 he was the Keynote speaker at the “Celebration of David Robert Lewis, Purdue’s First Black Graduate, BS Civil Engineering, 1894”.  In his talk, he shared the hardships of David Robert Lewis in the 1890’s and other people of color as students through the years to the present day.