The I-35W Mississippi River Bridge (officially named “Bridge 9340”) was designed by Sverdrup & Parcel and opened to traffic in 1967. It carried Interstate 35W over the Saint Anthony Falls of the Mississippi River in Minneapolis, Minnesota. Its unique 456 ft steel arch span was designed so that piers would not be constructed in the river and impede river navigation.

On August 1st, 2007, the bridge collapsed under the load of rush hour bridge traffic and construction equipment. 111 vehicles and 18 construction workers fell from the bridge during the collapse and resulted in 13 deaths. An investigation by the National Transportation Safety Board determined that the cause of the collapse was the buckling failure of several gusset plates. The combination of undersized gusset plates, the addition of 2 inches of concrete to the bridge deck had increased the dead load by 20%, and the estimated 575,000 pounds of construction materials/equipment had instigated the buckling.

Bridge specimens were donated by Minnesota DOT in October 2013. 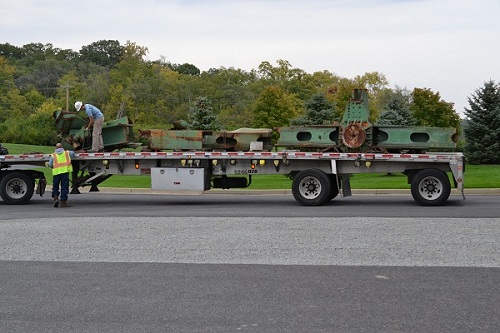