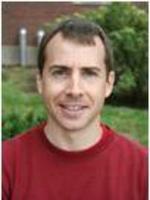 Edward Bartlett (Professor, BIOL/BME) will present "An alternative aging model produces central auditory deficits that precede peripheral deficits" at our next Seminars in Hearing Research at Purdue (SHRP) on October 28th at 1030-1120 in LYLE 1150.

Abstract: Oxidative stress and other cellular damage may contribute to Presbycusis, or age-related hearing loss, through cellular mechanisms that differ from acoustic overexposure, by having differential effects on the peripheral and central structures of the auditory pathway. Oxidative stress from hyperglycemia, induced by sugars such as D-galactose, is known to cause hearing alterations in animals and humans. One question for the development of presbycusis via oxidative stress is which structures are vulnerable earliest. Here we investigated the effects of D-galactose induced hyperglycemia on young adult Fischer-344 rats using electrophysiological markers that are sensitive to age-related changes in auditory processing.  Baseline evoked potentials were recorded in young rats to test the auditory brainstem response (ABR), envelope following response (EFR), and the middle latency auditory evoked response (MLR), followed by subcutaneously daily injections with either 500 mg/kg of d-galactose or an equivalent volume of saline for eight weeks.  Animals were reevaluated for the same auditory responses nine weeks after the initial test and nine months after the initial test.  Hearing thresholds assessed using tone ABRs were unaffected by D-galactose during the initial nine-week period but declined significantly more than in normal aging during the following months.  EFRs in response to low modulation frequency stimuli and ABR amplitudes of waves IV and V, indicative of rostral brainstem activities, decreased significantly during the initial nine-week period. EFR amplitudes in response to high modulation frequency stimuli and ABR amplitudes of waves I and III decreased significantly during the following months.  These results indicate that oxidative stress caused by D-galactose causes aging-like effects on the central auditory system earlier than the peripheral parts of the pathway, such as the cochlea, auditory nerve, and cochlear nucleus.  Thus, hyperglycemia/oxidative stress caused by brief exposure to D-galactose may be considered a model of central auditory aging for researchers. This model produces a window of central auditory decline without the accompanying peripheral decline, decoupling electrophysiological markers of cochlear damage from those of central auditory dysfunction.

The working schedule for this academic is here:

The titles and abstracts of the talks will be added here: