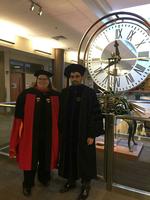 David Gonzalez Cuadrado defended his PHD thesis on "3D inverse heat transfer methodologies for microelectronic and gas turbine applications" in September and graduated in December. His work, joint with Prof. Guillermo Paniagua, focused on inverse methods for heat conduction problems where only limited temperature measurements are possible. In the MTEC lab, his work focused on electronic devices, whil his work in the PETAL group delved into turbines.

Kunal Thaker graduated with a MS degree in December 2018. Kunal was one of the first undergraduate researchers in the MTEC lab beginning in Spring 2014. He worked on designing and improving various iterations of the cross-plane measurment rig, which numerous labmates have used to measure thermal conductivity of thin films and composites.