Ali's Act of Kindness on His Birthday: A Letter to 2021-22 First-Year Engineering Students 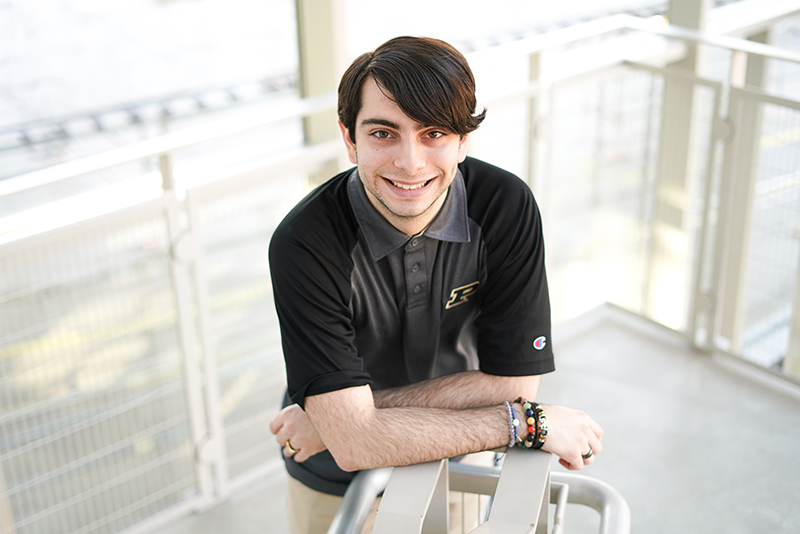 Several years ago, Ali started his new tradition by giving gifts to his family. “I can’t say where the idea really came from. It just kind of felt like a good thing to do, at least for me. I love giving to people.”  Fast forward to last year and his senior year at Carmel High School in Carmel, Indiana. Ali wanted to expand on his tradition and do something for his homeroom class. He made goodie bags for his classmates. “I had grown really close to [them] and that was my favorite place to be during my senior year. So it meant a lot to me.”  It also meant a lot to his classmates who received the unexpected gift. Some remarked even recently that his gesture stuck with them and remains really memorable.

Now at Purdue, Ali continues to expand on his tradition to give to others on his birthday, January 31. “When I got to Purdue, I saw all the space I had and I thought what if I kept expanding and keep doing more and more?” He decided on a letter for his classmates, many of whom he will never meet but all have one thing in common. “For all of us, coming in during a pandemic and Purdue’s record-high freshman class, there’s a lot to live up to. At the same time, there are also a lot of possibilities that the freshmen can take hold of.” Though Ali has had his own doubts, he also knows he can accomplish anything if he sets his mind to it. Thus, the idea of a letter written to his class. “In this moment, it helps to have any kind of reassurance and that belief that you can do it. And even if it doesn’t seem like it, you’re going to be fine and you’re going to accomplish everything that you want to. All you have to do is put your mind to it. It just really mattered to me that people heard that.”  As a result, Ali’s letter for First-Year Engineering students is a message of encouragement and what he hopes his peers will take with them.

Ali’s act of kindness isn’t random. He planned this day for months and worked with leadership in the School of Engineering Education to help share his act of kindness. We were so struck by Ali’s request that we decided to respond with our own act of kindness and challenge others to do the same. So today, on Ali’s birthday and coincidentally on National Hot Chocolate Day, we will be distributing hot cocoa packets and cups to our students. They will be made available to grab after students’ FYE classes throughout the week and can be prepared at the student’s convenience.

Great job on making it past the first semester! That’s not an easy thing to be able to say. Between adjusting to living independently and everything that comes with it and an entirely new way of learning, it’s a lot to juggle and you should be proud of yourself for doing it as well as you did. As a fellow freshman, the quest to making a home out of this city of a university has just begun.

College is entirely what you make of it. You have total control over what you choose to do, so make it interesting! Do stuff you like, go to clubs, hang out with friends, keep learning new things, keep growing every day. Of course, you also still have to do homework and get plenty of sleep and eat healthy and be respectful to everyone you meet and make responsible decisions before you even think about branching out.

Shoot. I guess this college thing is pretty hard. Don’t let that discourage you, though - it’ll come with time, and you’ll learn how to make your life at Purdue the way we want it to be. As the biggest and most incoming class of Purdue’s history, we have a lot to live up to - but we also have endless potential. Purdue is exactly the place where you’ll take advantage of that and make your dreams a reality, so don’t let the chance pass you by.

I’m going to be real here - being a freshman, I know as much as you do, so hopefully this didn’t come off as pretentious or anything. We’ll all go through adversity and stuff is going to get unbearably hard but at a school like Purdue, with boundless support and a great community, it all becomes possible. Quitting is the worst disservice you can do to yourself, so don’t give up. Just know that you’re awesome and that you’ll be alright in the end.

In conclusion, Boiler Up and Hammer Down!