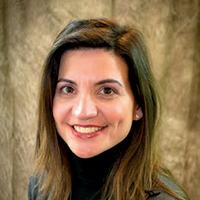 Konstantina "Nadia" Gkritza, Associate Professor of Civil Engineering
Electric cars that charge while driving? Purdue civil engineers want to make that leap. Konstantina "Nadia" Gkritza, Associate Professor in the Lyles School of Civil Engineering, studies the practicality of a roadway where electric-powered vehicles are recharged as they drive along it.

Konstantina "Nadia" Gkritza, Associate Professor in the Lyles School of Civil Engineering, studies the practicality of a roadway where electric-powered vehicles are recharged as they drive along it.

Gkritza is leading a feasibility study on how to best "electrify" a roadway in Los Angeles County. The team includes researchers from Utah State University, Colorado State University and the engineering firm AECOM. The $500,000 project was awarded through the U. S. Department of Energy's Innovative Development in Energy-Related Applied Science (IDEAS) program.

Gkritza, along with Civil Engineering PhD students Christos Gkartzonikas and Theodora Konstantinou, studies inductive charging, which would entail installing charging pads into the pavement. The team is considering four Los Angeles-area corridors for potential field testing: I-710, I-210, Vermont Avenue and the Metro Orange Line.

Currently, there is nothing in the U.S. that resembles what Gkritza and her team are proposing. The closest thing to it is conductive charging, which relies on power lines above the road, used by vehicles such as San Francisco trolleys.

Gkritza says deployment of inductive charging into roads could yield significant benefits — both to the environment, with emissions reduction, and to the consumer, with greater product confidence.

"A common barrier for a lot of drivers — even those who own electric cars — is a concern that they'll run out of power and find themselves stranded in the middle of nowhere," she says. "Roads like we are proposing would encourage more people to take long drives in electric vehicles and consider them as reliable as standard vehicles."

There are still areas that require further study before physical testing can take place.

"Our main work focuses on identifying who will adopt this technology first and on assessing the willingness to pay for different scenarios of technology implementation," Gkartzonikas says. "And based on the market acceptance rates, we will quantify the environmental impact of inductive charging."

For now, Gkritza says her team's focus is on assessing market adoption and environmental impacts before creating a plan to bring their research out of the lab.

"This project is exciting, but there is a lot of work to do. There are only a few other countries that have done anything like this," she says. "We are all looking forward to making the next step."

If effective, Gkritza says the work may well be a giant leap for our mobile society.