Origami shapes may lead to safer structures and products 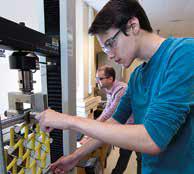 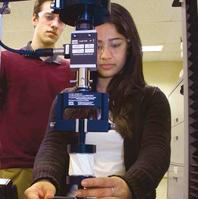 Working with associate professor Pablo Zavattieri at his lab in the Hampton Hall of Civil Engineering, juniors Sagarika Jetley and Gordon Jarrold are testing these arts-and-crafts-like designs as models for new types
of energy-absorbing materials. The students examine various designs, testing different types of paper and investigating other materials such as acrylic plastic and balsa to determine whether their small-scale models might have large-scale implications.

“This has been an exciting opportunity to apply some of the theoretical principles we have learned in the classroom,” says Jetley, whose family moved from India to Naperville, Illinois. “The experience has been fun and educational — spending hours and hours working with different origami shapes to see what does and what does not work.”

Zavattieri and his research team are exploring the development of these special materials — called phase-transforming cellular materials (PXCMs) — which absorb energy and help mitigate damage in the structural components of buildings, bridges and other large structures. Zavattieri’s research is in partnership with automaker General Motors Corp., with funding also from the National Science Foundation.

PXCMs contain unit cells that have multiple stable configurations; the structures can flex back and forth and remain in either position indefinitely, not unlike a flexing playing card or a metal tape measure. Transformation between stable configurations in large chains of unit cells allows for the dissipation of tremendous energy after an impact or cyclic event.

The super-elastic materials are reusable and less expensive than existing energy-absorption and damage-mitigating materials. And like other phase-transforming materials such as shape-memory alloys, PXCMs could be controlled using heat or other external stimuli, Zavattieri says. This concept of actuation also may prove helpful in making soft robots, which are flexible and able to conform to various shapes.

“We are evaluating new origami geometries to create thin-walled structures that show phase-transformation capabilities,” Zavattieri says. “This phase transformation that occurs at the unit-cell level exhibits negative stiffness, which is a property that leads to snap-through behavior. Thus, while these structures could be loaded at low frequencies (like in an earthquake), the snap-through behavior, which is a local instability, is employed to dissipate energy and consequently absorb energy under cyclic loading conditions.”

Undergraduate Energy in the Lab

The CE undergraduates are mentored by David Restrepo, a postdoctoral research assistant from Colombia who manages Zavattieri’s lab. Restrepo has expertise in the design, modeling, fabrication and testing of smart cellular materials, specifically multiscale modeling of naturally occurring, damage-tolerant materials and structures.

Jarrold, a junior from Bloomington, Indiana, is studying specific types of PXCMs — some developed with 3-D printing techniques — using computer modeling and computer-aided design. His designs, called “chiral PXCMs,” are geometric models that are connected with splices of metal measuring tape and aluminum tubing.

“This project has been really engaging, and I’ve been excited about being able to apply what I’ve learned in the classroom about the basics in materials, structures and other concepts,” Jarrold says.

Jetley is advancing origami designs developed last semester by student John Cleveland, a junior in aeronautics and astronautics from Scottsburg, Indiana. Jetley, who comes from a family of engineers, says she began working with a six-cell cylindrical origami prototype last semester. Then, Restrepo and doctoral student Yunlan Zhang encouraged her to focus on a single-cell design, which would make it easier for understanding bi-stable behavior and require less material. A bi-stable system has two resting states, like a light switch.

“We researched what boundaries we could go to and whether the design would still be bi-stable,” Jetley says.

“These students are passionate about contributing to the research, asking a lot of questions and challenging us every day,” Zavattieri says. “What’s more, these students are playing key roles in a type of work that breaks the stereotypes of civil engineering research, which can be as unpredictable and exciting as any engineering discipline in terms of what the future holds.”

Jarrold credits participation in his high school robotics team and mentors from the Crane Naval Center for sparking a deeper interest in engineering.

“I’ve discovered that there are mistakes in nearly every step in the process. There is a lot of failure, but it’s about how you deal with those setbacks where much of the learning happens,” he says. “Professor Zavattieri, Dr. Restrepo and the team place a tremendous amount of trust in me. I’ve had a lot more creative freedom than I expected an undergraduate would have.”

As for Jetley, she is not surprised that Professor Zavattieri is so successful at recruiting undergraduate researchers to his lab, saying, “He’s very approachable.”