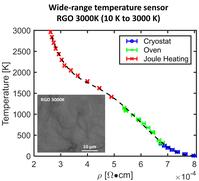 Reduced graphene oxide (RGO) films are promising in applications ranging from electronics to flexible sensors. Though high electrical and thermal conductivities have been reported for RGO films, existing thermal conductivity data for RGO films show large variations from 30 W/m-K to 2600 W/m-K. Further, there is a lack of data at low temperatures (<300 K), which is critical for the understanding of thermal transport mechanisms. In this work, a temperature-dependent study of thermal (10 K to 300 K) and electrical (10 K to 3000 K) transport in annealed RGO films indicates the potential application of RGO films for sensing temperatures across an extremely wide range. The room-temperature thermal conductivity increases significantly from 46.1 W/m-K to 118.7 W/m-K with increasing annealing temperature from 1000 K to 3000 K with a corresponding increase in the electrical conductivity from 5.2 S/cm to 1481.0 S/cm. In addition, films reduced at 3000 K are promising for sensing extreme temperatures as demonstrated through the measured electrical resistivity from 10 K to 3000 K. Sensors based on RGO films are advantageous over conventional temperature sensors due to the wide temperature range and flexibility. Thus, this material is useful in many applications including flexible electronics and thermal management systems.