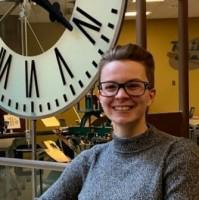 One of our undergraduate researchers, Emily Nadler, wins the Starkey Prize for Outstanding Seniors in the Mechanical Engineering department.

Nobody works harder than Emily Nadler, whether in the classroom or on the field.  She's had internships with iRobot, Allison Transmission, and GE Aviation, and has conducted heat transfer research with Prof. Marconnet's MTEC lab.  She served as President of Purdue Women's Ultimate, and worked closely with Purdue Club Sports.  She's also well known amongst Pi Tau Sigma for helping other students in time of need, whether it's with academic tutoring, or baking treats to cheer people up!

The John M. Starkey Prize in Mechanical Engineering celebrates the top all-around graduating ME senior every year, as exemplified by the school’s core values of Character and Personal Integrity, Academic Excellence, and Community Engagement and Leadership. The award comes with a cash prize of $2,000. Must meet the following criteria:

The Starkey Prize is named after John Starkey, who served as a professor in Mechanical Engineering from 1982 to 2017.  He served as faculty advisor for Purdue's SAE auto racing teams, and also director of the ME463 senior design capstone class, where he oversaw the final Purdue experience for hundreds of students.

Check out more details at https://engineering.purdue.edu/ME/Awards