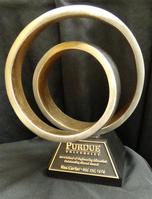 Rex Carter, a 1974 graduate with an Interdisciplinary Engineering degree in Urban Systems and Transportation, is the School of Engineering Education’s 2014 Outstanding Alumni Award winner.

Carter came to Purdue University after growing up in Evansville, but very much aware of the social unrest and injustice occurring across the United States at that time. In particular, he says it was the plight of the nation’s great cities collapsing from neglect that spurred him on the plan of study. Carter credits the assistance and guidance of Prof. Dick Grace, then the head of IDE, for his success.

“I learned, through a period of time, what it meant to be an engineer,” Carter said. “(I had) great support, great positive reinforcement along the way, and I cannot imagine a better education to have obtained.”

He also stressed the importance of students taking advantage of all Purdue has to offer.

"The resources are outstanding and unique. Once graduated, you likely will not have the same extensive resources at your disposal. So, take the harder classes, do the extra work, meet all the experts you can. You are learning how to learn. There is no better preparation for a career than an engineering education."

After an early career that involved consulting for the airline industry and a job with Continental Airlines, he transitioned into information technology. Carter says it was his ability to communicate effectively with IT staff that led him down the path to eventually becoming chief information officer and executive vice president for Hitachi Data Systems.

“You’re only as good as what you can communicate and how you can relate to other people,” he said.

After graduating from Purdue 40 years ago, Carter is beginning to look back with careful examination at his undergraduate and professional career.

“One of my big regrets is I never said, ‘Thank you,’ enough to the folks who saw something in me that I could not yet see,” he said.