It is our great pleasure to present this year's recipients of the Engineering Education Outstanding Alumni Award, Judith Cleland, Pedro Pires de Miranda, Jennifer Kerr and Arnold Young, all graduates of the former Division of Interdisciplinary Engineering (now part of the School of Engineering Education). At our event held last week, we also celebrated our top junior and senior students for their academic achievements and service.

Our 2020 honorees are each such an inspiration. They have distinguished themselves as engineers, entrepreneurs, and executives in fields of endeavor including environmental, global innovation, medical devices and research and software-based business solutions. In doing so, they have displayed the ingenuity and pursuit of excellence that epitomize the Purdue engineer.

Judy actually began her journey to Purdue with a Biology major. With a desire to have a career that focused on preservation of the environment, she switched her major before her sophomore year to Interdisciplinary Engineering with an emphasis on environmental engineering.

After graduation and soon to be a licensed professional engineer, Judy worked for a consulting firm, HNTB, located in Indianapolis, for over a decade, with her work emphasis on wastewater planning and design projects due to the recently adopted enactment of the Clean Water Act.

In 1994, Judy made the decision to start her own firm, Cleland Environmental Engineering, Inc.  Having three elementary school age children at that time, she was looking for a better way to balance being a mother and an engineer.  She told us that the early years started out slow, but eventually business evolved.  Her clients include municipalities, industries, state government, private firms and individuals, and other consulting firms.

Beyond her engineering work, a main interest for Judy has been involvement with the Indiana Water Environment Association (IWEA) and the Water Environment Federation (WEF).  Early in her career, she had the opportunity to serve as the IWEA Assistant Secretary Treasurer for five years followed in 1984 by service as Secretary Treasurer.  She also served as chair and member of several committees.

Later in her career, she was nominated for Vice-President of the organization and worked her way up the ladder to President in 1995.  Between 2002-2005, she served as an Indiana Director to WEF.  Honors received included 1982 IWEA Tumblebug Award (for committee service), 1993 Indiana recipient of the WEF Arthur Sidney Bedell Award, 2005 Wastewater Challenge First Place Overall Winner (as part of a three-person team) and 2015 IWEA Honorary Membership Award.

Judy and her husband John met at Purdue and are life members of the Purdue Alumni Association, members of the John Purdue Club and Purdue President’s Council.  They established the Blaine Crowl Animal Science Scholarship and the Cleland Family Endowment for Animal Science.

Jennifer graduated in 1993 with a concentration in bioengineering, proudly part of the beginning of biomedical engineering that now is an established school. She also earned her masters degree in Physiology from Purdue and is a Certified Clinical Research Associate (CCRA) and as well as a member of Regulatory Affairs Professionals Society (RAC).

Jennifer has been involved in clinical research and regulatory affairs for more than 20 years. She is currently the President of Cook Research Incorporated. Cook Research Incorporated is involved in product development, testing, clinical studies, medical and scientific writing, and regulatory submissions for devices, pharmaceuticals and cell-based medical therapies. Jennifer also serves as the Global Functional Leader for Clinical Affairs for the Cook organization.

Jennifer’s professional service in the medical device industry includes serving as the Co-Chair of AAMI/BE/WG 04, Clinical Investigations representing the US industry and as a member of the ISO steering committee for the ISO 14155 clinical standard for medical device clinical studies.

She represents Cook Medical on the Board of Directors for the Medical Device Manufacturers Association (MDMA) in addressing challenges facing the medtech industry.

Jennifer also represents Cook Medical on the Clinical Science and Medical Officer Advisory Committee with the Medical Device Innovation Consortium (MDIC) where she collaborates with FDA, industry and healthcare professionals in identifying pathways of bringing new technologies to patients.

While Jennifer is very connected with Purdue and many of her prior professors and mentors in the biomedical sector, she is also a proud member of the advisory council for Purdue University’s Women’s Global Health Institute which was founded to improve the health of women through research and training developed at Purdue.

Jennifer is a member of the Class of 2017 Hoosier Fellows Program at Indiana University which provides opportunities for experienced leaders to study different styles of leadership with practical implementation.

Pedro graduated in 1980 with an emphasis on electrical engineering and industrial engineering. He then furthered his professional education at Harvard Business School Executive Education Programs, Engineering Management at Krannert School of Management, General Management at Universidade Nova de Lisboa, and Industrial Engineering at REFA Institute Darmstadt, Germany. Previous to attending Purdue University, Pedro was an American Field Service (AFS) Scholar studying in New York and graduated with honors in mathematics and science.

Pedro is Chief Executive Officer of Siemens Portugal and Chairman of the Board of Directors of Siemens Angola since 2016, and previously was Corporate Vice President of Siemens AG at its headquarters in Munich, Germany, between 2008 and 2016.

He joined Siemens in 1983 as a manufacturing engineering for low voltage equipment, specializing at its factory in Regensburg, Germany. He became of Head of Engineering, Manufacturing Development and Plant Manager there before holding several management positions at Siemens, namely Project Management and International Sales in various locations including Lisbon and Erlangen.

As Director of Engineering in 1998, Pedro was responsible for large international projects in Doha, Qatar, in India, in Dubai, and infrastructure projects in Portugal. He joined the Executive Board of Siemens Portugal in 2007.

In 2008, he was appointed Corporate Vice President of Siemens AG in Munich and Global Head of Key Account Management Siemens One as well as a member of the Sales Board responsible for the corporate governance of the Market Development Boards. Since 2012, Pedro as served as Executive Head of the Global Center of Competence Cities in London, UK, overseeing business development in Europe, Americas and Asia in 70 cities worldwide focusing on intelligent infrastructure in the domains of Buildings, Energy and Transportation.

Prior to Siemens, Pedro started his career at General Motors Corporation in 1981 as a manufacturing engineer for Opel, Europe, specializing first at its Inland division plant in Dayton, Ohio.

Predo is a proud Purdue Alumni Ambassador in Portugal. He is a member of IEEE-Institute of Electrical and Electronics Engineers, and was an invited speaker at the London School of Economics, Harvard Business School, West Point Military Academy and Universidade Nova, Lisbon. He has served as a member of the board for various business and engineering associations in Portugal, namely COTEC, Proforum and ANIMEE.

In 2014, Pedro received the great honor of Order of Merit Class Industry and the title Grand Officer from the President of the Republic of Portugal.

Arnold is a 1973 graduate with a concentration in environmental engineering. He earned a masters degree in Civil and Environmental Engineering from San Jose State and has his professional license in both California and his childhood home of Hawaii.

Arnold started his career as a consulting engineer for 10 years at two consulting firms in California, managing environmental-related construction projects.  He then transitioned into software, his real passion found through an early computer science class taken his freshman year at Purdue, and pursued a position as a developer, architect, and implementer at Ball, Ball & Brosamer Inc, a heavy highway construction company.

It was there that Arnold found his true calling with the goal of streamlining processes and creating applications to help management with scheduling, job cost accounting, operations of the fieldwork, and estimating new work. All this led to significant efficiencies for Ball, Ball, and Brosamer Inc. and they promoted him to Vice President of Management Information Systems.

Arnold took the leap in 1996 to start his own company. He launched his business doing hardware and software support for heavy construction companies. Now 20 years later, he still owns and operates Nice Touch Solutions, Inc. It offers a cloud-based Software as a Service (SaaS) application that helps companies process and manage extra work billing by automating a normally time-consuming process. More than 200 major California construction companies are customers and over $1 billion of billings pass through their system annually.

Arnold is also co-founder and co-organizer of ClarionLive – a community of Clarion Software Developers that began in 2009 and  holds weekly webinars and international conferences. 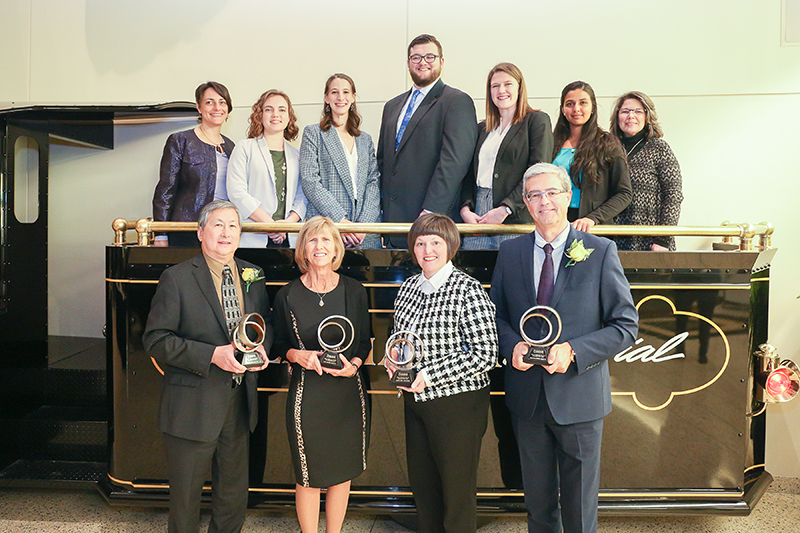 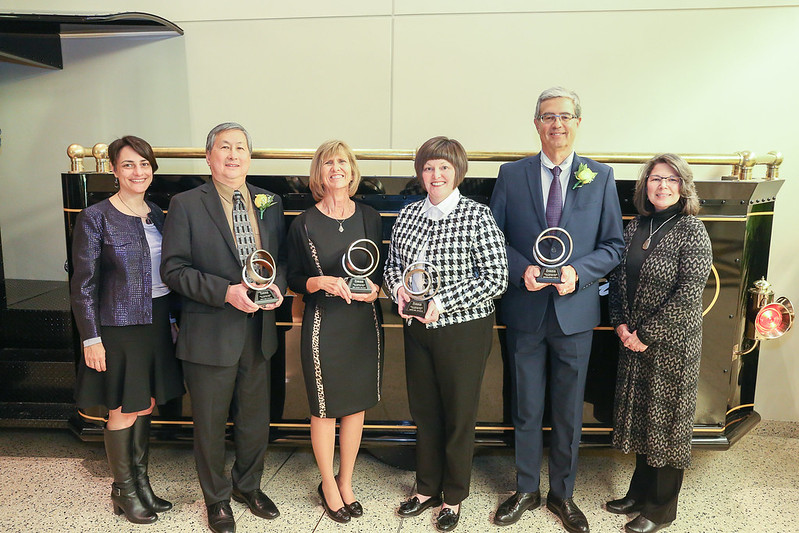 Ides of Engineering Podcast features a special episode with our honoree acceptance speeches. Tune in!