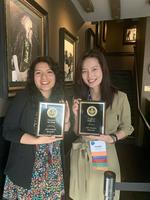 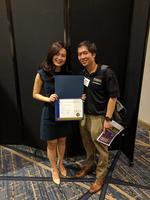 The HFES Student Member with Honors Award acknowledges student members who have made outstanding contribution to HFES. Students must have completed milestones such as evidence of significant contribution to an industry project, first author on an HFE research paper, presenter of an HFE-related lecture at a national or international conference. They must also have significant HFE-related service to HFES.

The inaugural HFE WOMAN Rising Star award recognizes Early Career Professionals and Graduate Students whose achievements and contributions mark them as the future leaders of HFE community. Jackie and Isis Chong were awarded this award as a duo, nominated by Drs. Denny Yu, Robert Proctor, and Barrett Caldwell:

“The inaugural recipients are two young ladies who have extraordinary achievements in both academics and service. Even though they are from different disciplines, together they serve as co-presidents of their local HFES student chapter. Their collaborative approach to leading has resulted in increased chapter outreach, campus involvement, promoting mentoring and raising awareness for women in STEM, not only to the students and organizations on campus but for K-12 students as well. In addition, both women have won numerous awards for their academic work, indicating they will be researchers to watch in the upcoming years.”