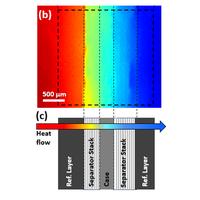 Journal of Power Sources, vol. 343, 2017. doi:10.1016/j.jpowsour.2017.01.019
Increasing usage and recent accidents due to Lithium ion (Li-ion) batteries exploding or catching on fire has inspired research on the thermal management of these batteries. In cylindrical 18650 cells, heat generated during the battery’s charge/discharge cycle is poorly dissipated to the surrounding through its metallic case due to the poor thermal conductivity of the jelly roll, which is spirally wound with many interfaces between electrodes and the polymeric separator. This work presents a technique to measure the thermal resistance across the case-separator interface, which ultimately limits heat transfer out of the jelly roll. Commercial 18650 batteries are discharged and cut using a battery disassembly tool, and the 25μm thick separator and the 200μm thick metallic case is harvested to make samples. A miniaturized version of the conventional reference bar method based on the ASTM D5470 Standard for thermal conductivity is used to create a temperature gradient across the interface, which, along with the temperature jumps at the interface, is accurately mapped by an infrared microscope. Measurements are recorded at for a range of case temperatures and interface pressures. While the mean thermal conductance across the case-separator interface is 670±275 W/(m2K), no significant temperature or pressure dependence on is observed.