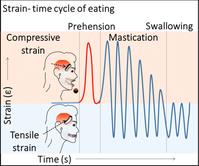 Monitoring live movements of human body parts is becoming increasingly important in the context of biomedical and human machine technologies. The development of wearable strain sensors with high sensitivity and fast response is critical to address this need. In this article, we describe the fabrication of a wearable strain sensor made of a Au micromesh partially embedded in polydimethylsiloxane substrate. The sensor exhibits a high optical transmittance of 85%. The effective strain range for stretching is 0.02%–4.5% for a gauge factor of over 108. In situ scanning electron imaging and infrared thermal microscopy analysis have revealed that nanometric break junctions form throughout the wire network under strain; strain increases the number of such junctions, leading to a large change in the sheet resistance of the mesh. This aspect has been examined computationally with the findings that wire segments break successively with increasing strain and resistance increases linearly for lower values of strain and nonlinearly at higher values of strain because of formation of current bottlenecks. The semi-embedded nature of these Au microwires allows the broken wires to retract to the original positions, thus closing the nanogaps and regaining the original low resistance state. High repeatability as well as cyclic stability have been demonstrated in live examples involving human body activity, importantly while mounting the sensor in strategic remote locations away from the most active site where strains are highest.