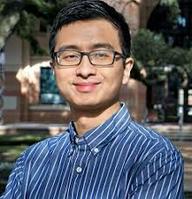 Felix Lin, PI of the CAREER award
Felix Lin, Assistant Professor in ECE and CRISP Thrust Lead in Cyber-physical systems, has won the NSF CAREER award. The project titled "A Trustworthy and Verifiable Software Backplane for the Cloud Edge" is for 5 years and started June 1, 2019.

The award for $500,000 is from the National Science Foundation through its prestigious CAREER program. This is a Foundation-wide activity that offers the National Science Foundation's most prestigious awards in support of early-career faculty who have the potential to serve as academic role models in research and education and to lead advances in the mission of their department or organization.

Felix's project is from the CNS Division (Computer and Network Systems) of the CISE Directorate (Computer & Information Science & Engineering). The project abstract is below.

CAREER: A Trustworthy and Verifiable Software Backplane for the Cloud Edge

Internet of things (IoT) produces a large influx of streaming data. The high cost and long latency in shipping raw IoT data necessitate edge processing: the data is summarized at IoT gateways, i.e. the cloud edge, from where the results are sent to the cloud. The objective of this project is to safeguard IoT data during edge processing. It seeks to establish a trusted data path on the edge. As the data flows through the path, the proposed edge system ensures 1) data confidentiality: IoT data is only accessible to trusted parties; 2) integrity: all the data having arrived at the edge is exactly manipulated according to the planned processing; 3) verifiability: data flows and computations on the edge are verifiable to a trusted cloud backend. Specifically, the project consists of three research thrusts for securing the three key edge components – IO, storage, and compute, respectively. The three research thrusts constitute a holistic agenda, contributing 1) new principles for architecting edge software and for using the cloud to enhance the edge security; 2) new characterizations of edge hardware, software, and their interplay with the cloud; 3) new system software.

The project’s research thrusts will be tightly integrated with its education and outreach plan, educating students on trustworthy computing scenarios as well as stimulating the public’s interests in STEM. The plan includes: 1) contributing fresh contents to curriculum; 2) enhancing student maker activities with in-situ IoT analytics; 3) a short summer course on IoT/Edge for local children; 4) an outreach at local communities for IoT events. As IoT is revolutionizing the modern society, the project represents a crucial step towards secure, efficient intelligence driven by IoT data.