The primary mission of the Cardiovascular Imaging Research Laboratory (CVIRL) is to advance imaging techniques for the study of disease progression in small animal models. While our lab’s initial focus was on cardiovascular disease, we have since expanded to include applications from diabetes to cancer. Through these technology advancements and applications to small animal disease models, we hope to ultimately better understand human disease and eventually enhance patient care. Several of our group’s major research efforts are highlighted below: 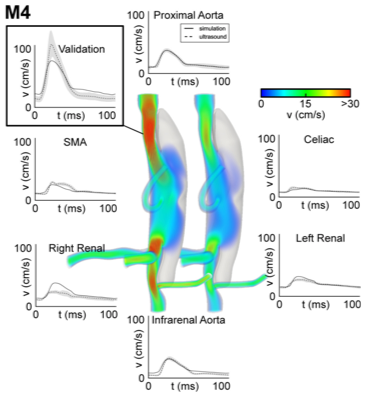 Our group has made several strides in exploring the morphological and biomechanical differences between two established experimental AAA models: elastase perfusion and angiotensin II (AngII) infusion in apolipoprotein E-deficient (apoE-/-) mice [1, 2, 3, 4, 5, 6]. Our findings demonstrate that the elastase perfusion model leads to fusiform AAAs with focally degraded elastin, whereas the AngII infusion model causes spontaneous dissecting AAAs with true and false lumens. Utilizing high frequency ultrasound imaging, progressive volumetric aneurysm growth, reduced circumferential strain, and altered blood flow dynamics have been quantified in both AAA models. We then used these metrics in our AngII-induced murine dissecting AAAs to create statistical models that can be used to predict aneurysm development and growth trends [7].

In collaboration with Dr. Jay Humphrey of Yale, we have broadened the application of our imaging data to digitally reconstruct 3D true and false lumens within murine aortic dissections, and then use those 3D geometries and doppler ultrasound data to perform mouse-specific hemodynamic simulations of blood flow through aneurysmal regions [8]. Our results suggest that 1) a false lumen cavity is necessary for the formation of major recirculating events, 2) vortices initially form at the proximal end of the false lumen opening, and 3) differences in morphology and hemodynamics play crucial roles in determining the evolution of dissecting abdominal aortic aneurysms. Recent efforts within our lab have investigated this disease heterogeneity phenomenon even further using novel 4D ultrasound techniques, highlighted below, specifically studying regional deformation and strain within the aortic wall. 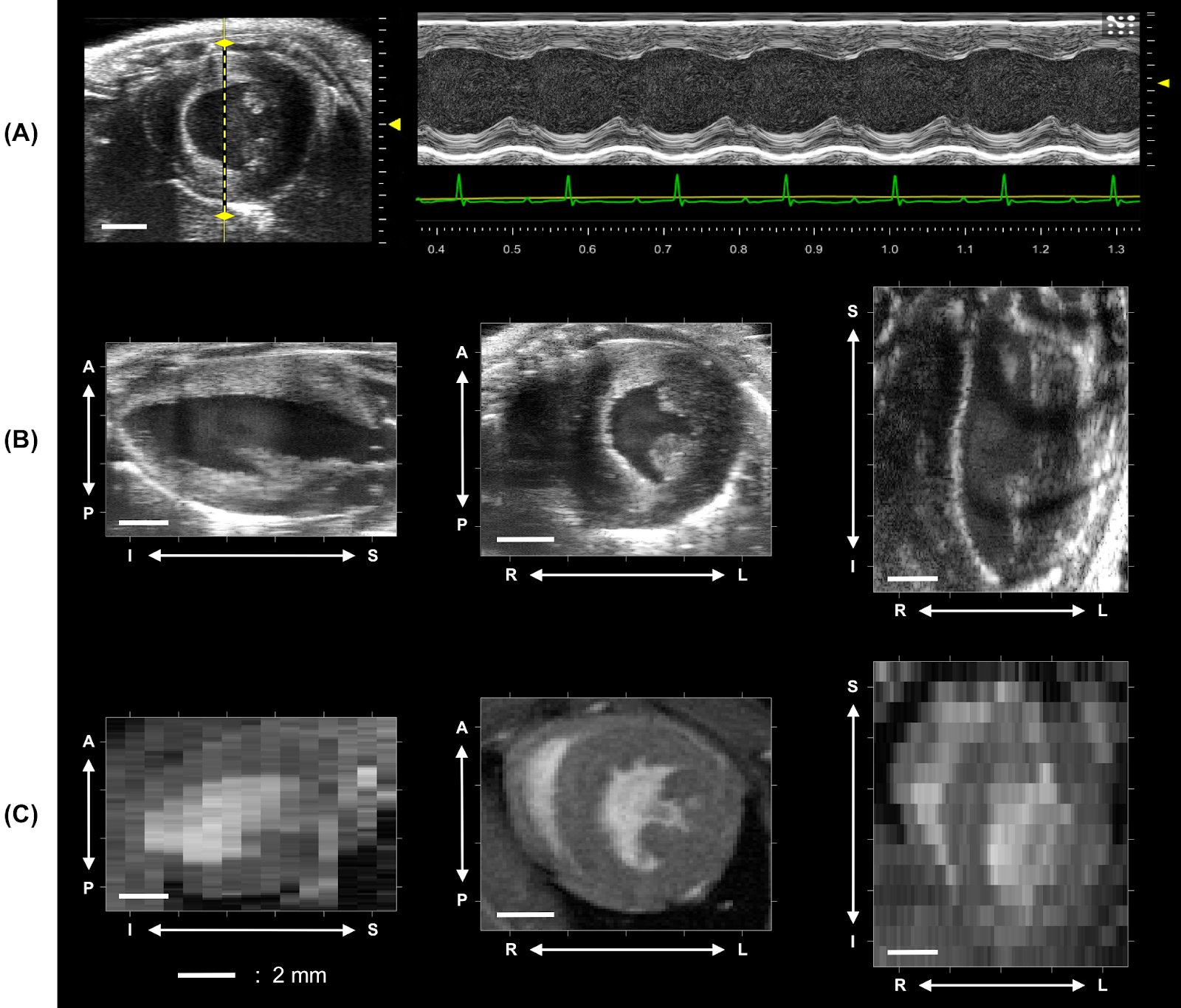 In the field of cardiac imaging [9, 10, 11, 12], our group has recently showcased a novel 4-dimensional ultrasound (4DUS) imaging strategy for evaluating murine cardiovascular kinematics, with an initial focus on cardiac applications [13, 14]. Although conventional short-axis motion-mode (SAX MM) ultrasound and cine MRI are two of the most prevalent strategies used for quantifying cardiac function, standard ultrasound requires substantial geometric assumptions to calculate functional metrics (i.e. ejection fraction, stroke volume, etc.) and MRI requires large and costly systems with substantial infrastructure upkeep. Our novel 4DUS technique leverages current high-frequency transducers, cardiac- and respiratory-gating, and controlled probe movement to collect volumetric data while taking advantage of the portability and low cost of ultrasound. Preliminary applications of the 4DUS technique to a mouse model of cardiac hypertrophy [13] and myocardial infarction [14] have demonstrated that 4DUS-derived cardiac function metrics have precision on-par with that of cine-MRI. This work was recently highlighted as a VisualSonics “Featured Publication” and the 4D mode has now been integrated into the Vevo3100 high-frequency ultrasound system.

We then integrated 4DUS with 3D strain mapping, enabling us to longitudinally characterize LV mechanics within and around infarcts during the post-MI remodeling process [SUBMITTED; Soepriatna]. To study myocardial infarctions with varying severities, we have performed and compared 1) sham, 2) 30-minute ischemia-reperfusion, and 3) permanent ligation surgeries of the left coronary artery. Using 4DUS from a high frequency small animal system, we are then able to monitor changes in LV geometry, function, and strain post-MI. Reconstructed 3D myocardial strain maps have shown that strain profiles at the infarct border follow a sigmoidal behavior. We also found that mice with mild remodeling had significantly higher strains in the infarcted myocardium when compared to those with severe injury. Finally, we developed a new approach to noninvasively estimate infarct size from strain maps, which correlated well with histological results. Taken together, the presented work provides a thorough approach to quantify regional strain, an important component when assessing post-MI remodeling. 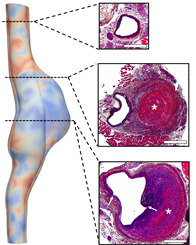 Current in vivo abdominal aortic aneurysm (AAA) imaging approaches tend to focus on maximum diameter but do not measure three-dimensional (3D) vascular deformation or strain. Complex vessel geometries, heterogeneous wall compositions, and surrounding structures can all influence aortic strain. Improved understanding of complex aortic kinematics has the potential to increase our ability to predict aneurysm expansion and eventual rupture. Similar to the cardiac strain method mentioned above, we use a method that combines 4DUS and direct deformation estimation to compute in vivo 3D Green-Lagrange strain in murine aneurysms. With this method, we have investigated angiotensin II-induced suprarenal dissecting aortic aneurysms, a commonly used small animal model [16]. We compared heterogeneous patterns of the maximum, first-component 3D Green-Lagrange strain with vessel composition from mice with varying dissecting aneurysm severity. Intramural thrombus and focal breakage in the medial elastin significantly reduced aortic strain, as confirmed by our histological findings. Interestingly, a dissection that was not detected with high-frequency ultrasound also experienced reduced strain, suggesting medial elastin breakage that was later confirmed via histology. These results suggest that in vivo measurements of 3D strain can provide improved insight into aneurysm disease progression. While further work is needed with both preclinical animal models and human imaging studies, this initial murine study indicates that vessel strain should be considered when developing an improved metric for predicting aneurysm growth and rupture.

Combining ultrasound and optical imaging allowed us to develop novel photoacoustic techniques that offer great promise for a variety of clinical applications [17, 18]. Our group has worked with collaborators to publish on breast tumor margin detection [19] and peripheral nerve visualization [20]. These efforts have been cited in multiple reviews [21, 22, 23, 24] and was described in a Science review article as part of work that is pushing the “boundary of the vibrational spectroscopic imaging field in terms of acquisition speed, detection sensitivity, spatial resolution, and imaging depth” [25].

While we have broad applications, the primary work in developing photoacoustic imaging has been for the non-invasive, label-free study of vascular disease [26]. In particular, we have focused on lipid-based diseases, responsible for a significant portion of world mortality via diabetes, obesity, liver disease, and vascular diseases. We have developed an in vivo dual-modality photoacoustic and ultrasound approach that is capable of noninvasively providing label-free optical contrast of both lipid and blood in small animals [26]. Preliminary findings demonstrated that older hyperlipidemic male mice have greater periaortic fat accumulation compared to adolescent males, females, and wild-type controls. We have since utilized this dual-modality approach to study plaque development in a surgical model of atherosclerosis. This work has revealed that regions of increased oscillatory shear stress may cause early vascular remodeling failure and more aggressive lipid deposition [In Preparation; Sangha].

Additional efforts in the group have investigated how illumination geometry impacts light penetration depth and signal-to-noise ratios, from which we have built an adjustable optical fiber holder that can control light delivery using bipolar stepper motors [27]. We believe these various efforts in innovating photoacoustic tomography can help us quantify biological changes that are relevant to vascular pathophysiology, as well as highlight this technique’s potential to improve the diagnosis of lipid-based diseases [28]. 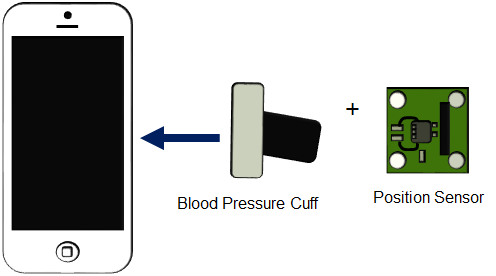 In collaboration with Dr. David Reuter, our group has led an effort to improve outcomes for pregnant women at risk for preeclampsia and their unborn children. The lab is working on automating the supine pressor test, an existing tool that tracks pregnant women’s risk of developing preeclampsia after 20 weeks of gestational age. The automation of this tool could especially benefit pregnant women in low- to middle-income countries as they could use this tool to assess their preeclampsia risk between infrequent doctor visits. We have conducted both a pilot study in non-pregnant women and a feasibility study in pregnant women to refine and standardize the supine-pressor test procedure [29]. Additionally, our group is working to emphasize the importance of sleeping on one’s side during pregnancy to avoid potential complications arising from sleeping on the stomach or back during this time.

The research and publications highlighted above are but a small snapshot of the work currently underway in CVIRL. The laboratory is comprised of a talented group of researchers who can identify clinical needs, develop effective strategies to tackle each problem, and then have the wherewithal to implement novel solutions.