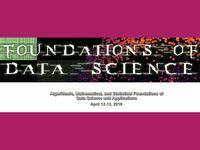 Dr. Joaquín Goñi will speak at the Foundations of Data Science workshop at Purdue University on April 12.

Goñi will speak on "Brain connectomics: from maximizing subjects identifiability to disentangling heritable and environment traits".

In the 17th century, physician Marcello Malpighi observed the existence of patterns of ridges and sweat glands on fingertips. This was a major breakthrough and originated a long and continuing quest for ways to uniquely identify individuals based on fingerprints. In the modern era, the concept of fingerprinting has expanded to other sources of data, such as voice recognition and retinal scans. It is only in the last few years that technologies and methodologies have achieved high-quality data for individual human brain imaging, and the subsequent estimation of structural and functional connectivity. In this context, the next challenge for human identifiability is posed on brain data, particularly on brain networks, both structural and functional.

Dr. Goñi  will present how the individual fingerprint of a human structural or functional connectome (as represented by a network) can be maximized from a reconstruction procedure based on group-wise decomposition in a finite number of orthogonal brain connectivity modes. By using data from the Human Connectome Project and from a local cohort, he will also introduce different extensions of this work, including an extended version of the framework for inter-scanner identifiability, and an extended version of the framework for disentangling heritability and environmental brain network traits.

Dr. Goñi is a Computational Neuroscientist who works in the emergent research area of Brain Connectomics. He heads of the CONNplexity Lab, which focuses on the application of Complex Systems approaches in Neuroscience and Cognitive Science, including frameworks such as graph theory, information theory or fractal theory. Projects include relating structural and functional connectivity within the human brain. His interests includes healthy and disease conditions, including neurodegenerative diseases. He also contributes to theoretical foundations of Complex Systems. He earned my degree in Computer Engineering in 2003 (University of the Basque Country) and his PhD in 2008 from the Department of Physics and Applied Mathematics (University of Navarra). In 2015, he joined the Purdue School of Industrial Engineering as an Assistant Professor.