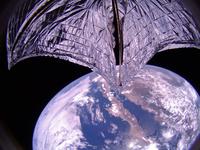 LightSail 2's 32 sq. m solar sail imaged after successful deployment on July 23rd.
The Planetary Society has announced the success of the LightSail 2 mission as it becomes the first spacecraft in history to demonstrate controlled solar sailing in Earth orbit.

Just days after deploying its solar sail, LightSail 2 has demonstrated controlled solar sailing in Earth orbit for the first time. The flight team, which includes SFPL director Dr. David Spencer and PhD student Justin Mansell, successfully deployed the sail on the evening of July 23rd as the spacecraft passed over the continental United States. The spacecraft entered solar sailing mode immediately after and changes in the orbit due to solar pressure soon followed. Downlink of stored telemetry confirms that the spacecraft is maneuvering between sailing attitudes as expected. Details and ongoing updates are available from The Planetary Society's mission blog. The team is continuing to refine the control performance of the spacecraft, with solar sailing operations expected to continue through August and beyond.