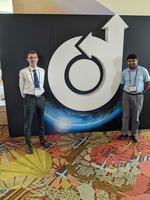 Rohan's paper, titled "Derivation of Atmospheric Flight Equations of Motion Using Lagrangian Dynamics and Its Application to Aerocapture" presented an alternative derivation of the equations governing the flight of spacecraft through planetary atmospheres. He was prompted to explore the alternative method last year after taking a class in advanced dynamics. The work ties in neatly with his research on guidance and control for aerocapture, and the paper included a relevant example of an aerocapture trajectory at Mars.

Meanwhile, Justin presented the latest technical results from the LightSail 2 mission in a paper titled "Orbit and Attitude Performance of the LightSail 2 Solar Sail Spacecraft." The paper describes the major findings of the mission thus far and recounts major anomalies and tests that the team encountered along the road to demonstrating the first controlled solar sailing in Earth orbit. The paper is summarized in a blog by The Planetary Society, which runs the mission.

For both students, this was their third conference paper in less than 12 months. Well done!