Jim Eibel (BSME ’58) always wanted to be a mechanical engineer. As a kid, he says, “I did all kinds of things that had to do with engineering. I was a woodworker, worked with motor vehicles, all that kind of stuff.”

His father, Frederick Eibel (BSME ’29), himself a Purdue Mechanical Engineering graduate, ran his own contracting business in Gary, Indiana. “My dad lettered in football for three years, in basketball for three years and in track for one year. He was also pledge-father to John Wooden,” Eibel says. “Can you believe that?”

What school do you hire your engineers from? I want Purdue to stay on top of everyone’s list.

While earning his degree, Eibel participated in multiple campus activities, including Naval ROTC. After graduating in 1958, he served three and a half years in the U.S. Navy, including time as a chief engineer aboard the USS Great Sitkin, a barely running munitions ship he was charged to ready for service. He recalls, “It was a great experience for a mechanical engineer.”

In 1962, when Eibel started his first job at the American Telephone & Telegraph Co. (AT&T), he did not imagine himself a high-level corporate executive. Nevertheless, over the course of 37 years, Eibel blended business acumen with engineering know-how — and excelled at managing large-scale operations.

An Engineer in Operations

At AT&T’s Indianapolis office, he started as the building foreman, managing heating, cooling and ventilation systems. He soon made district plant manager, then division manager. With each new assignment, he advanced. Over the years, Eibel witnessed tremendous change in the telecom industry, including the government-mandated breakup of AT&T in 1982.

We are ever grateful to Jim and Sue for their generosity and support, which truly benefits both our faculty and students as we prepare future leaders.

Eibel directed data systems and mainframe services, managed central offices throughout Indiana, and at one point oversaw an 18,000-person sales and service force. When he retired in 1995, Eibel was vice president for operations over five states for Ameritech Corp., which later reclaimed the AT&T name.

“Before I started working, I had no idea I would do so many things,” he says. “I had a great career. I had great bosses. I had great opportunities.”

Jim and his wife, Sue, a Purdue alumna (BS Home Economics ’61), moved their family around Indiana and the Midwest many times. “Sue is amazing. She supported me every step of the way,” Eibel says. “She is a great wife and mother and always good-spirited about moving — several times while caring for newborns.”

Thanks to hard work and professional success, Jim and Sue are enjoying retirement and indulging their philanthropic desires. Several years ago, Sue’s sister and brother-in-law, Sally (BS Child Development ’61) and Bill Hanley (BS Industrial Economics ’60), provided startup funds to build Hanley Hall in the College of Health and Human Sciences. Within Hanley Hall, Jim and Sue made a contribution to name the Susan Berner Eibel Toddler Classroom. “It was very gratifying to see my wife acknowledged for her passion for childhood education,” Eibel says. “Sue taught kindergarten after she graduated from Purdue.”

Last year, when Eibel learned that the School of Mechanical Engineering was planning some updates in the venerable Mechanical Engineering Building, he was intrigued. The structure, built in 1932, was where Eibel calculates he spent 80 percent of his undergraduate years. “The building has not changed since I graduated in 1958,” he notes. 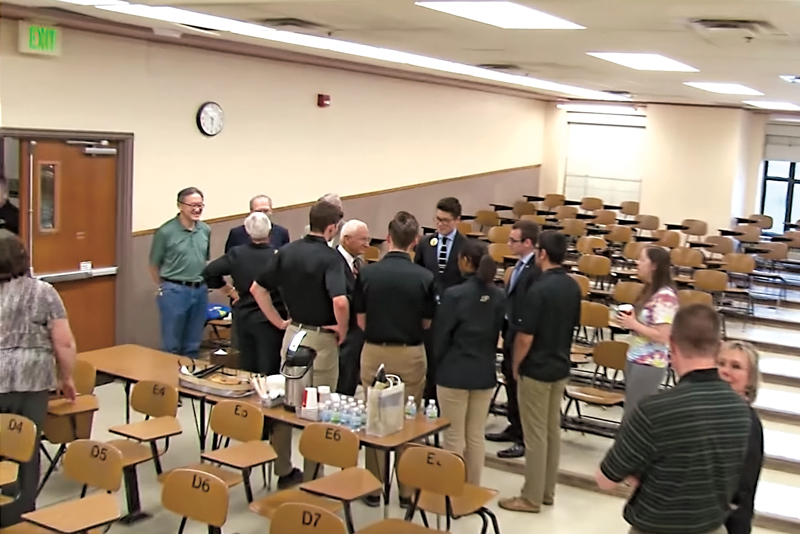 The Eibels’ gift will help modernize the Mechanical Engineering Building, which was constructed in 1932. The original lecture hall (above) now bears Jim Eibel’s name, a symbol of his support.

Strategic thinker that he is, Eibel saw the opportunity to make a gift as part of Purdue’s Ever True fundraising campaign, hoping his gift would motivate others to join in the campaign effort. Last fall, Jim and Sue made a $500,000 contribution to name the James A. Eibel Classroom in Mechanical Engineering. His name is now affixed in the ME lecture hall, a symbol of his wish to ensure Purdue’s Mechanical Engineering program remains vibrant.

“We are ever grateful to Jim and Sue for their generosity and support, which truly benefits both our faculty and students as we prepare future leaders,” says Anil Bajaj, the William E. and Florence E. Perry Head and Alpha P. Jamison Professor of Mechanical Engineering.

Though the classroom bears his name, the gift also is a tribute to his father. “My dad had very good principles and was a very good influence on me and my brother,” Eibel says. “He made sure we got the right attitudes and the right education.”

“There were several things that had a positive impact on my career, and Purdue Mechanical Engineering was one of them,” Eibel adds. He believes that the quality of a program is determined by the people who hire its graduates. “What school do you hire your engineers from? I want Purdue to stay on top of everyone’s list.”

To support the School of Mechanical Engineering, contact Scott Banfield, senior director of development, at 765-494-5629 or WSBanfield@prf.org.