The opportunity spurs one Purdue alumnus to honor his parents.

Now, rather than later. That was the driver behind two recent gifts to the School of Electrical and Computer Engineering.

Bill Elmore (BSEE ’75, MSEE ’76) sees now as a “terrific time” to step forward and support both a growing Purdue and an expanding College of Engineering.

“I want to make sure more young people, especially low-income kids from families who haven’t traditionally attended college, are admitted and able to complete four-year degrees,” says the Silicon Valley venture capitalist, who shares his own expertise with local youth by teaching personal finance courses to ninth-graders during the summer months. “I’m especially interested in helping STEM-oriented programs like the College of Engineering.”

I’m grateful to the University for everything it gave me — my education, my siblings’ education. We all took so much from Purdue. It’s important to give something back.

Because expanding enrollment means expanding faculty, Elmore understands there is a need for financial resources to hire and retain great professors.

“We can elevate the quality of the faculty even further,” he says. “I love buildings, but I think people are what make a university what it is.”

That said, Elmore wanted to do more than simply make a donation himself. He also wanted to create an incentive for others to contribute in support of faculty recruitment and retention. After brainstorming ideas with Professor Venkataramanan “Ragu” Balakrishnan, the Michael and Katherine Birck Head of ECE, he landed on the idea of a matching gift to the College’s endowment. By donating $1.5 million in matching funds to establish named professorships, Elmore created the potential for a total of $3 million in support of ECE’s faculty.

“The more named professorships we have, the better. It’s a great way to recognize top faculty,” Elmore says. “The match helps lower the threshold for giving. Ragu can approach someone and say, ’Here’s an opportunity for you to give right now.’ That’s important because that’s how we’re going to hire great professors and retain them — and that’s how we’re going to increase the stature of this university.”

“Endowed professorships are critically important in retaining our most accomplished faculty,” Balakrishnan says. “Bill’s gift of matching funds is a unique and tremendously valuable resource for ECE.”

No Reason to Wait

For Steve Schwartz (BSEE ’81, MSEE ’82, PhD EE ’85), president and CEO of Brooks Automation, giving back was always in his future plans. Purdue was not simply his alma mater; for many years, it was home. His father, Dick Schwartz, retired from the University in 2008 after 44 years of service — first as an ECE professor, then as head of ECE and ultimately as dean of the College of Engineering. He also was an inaugural co-director of the Birck Nanotechnology Center. All eight of Dick and Mary Jo Schwartz’s children graduated from Purdue, seven of them with engineering degrees.

“Purdue is a part of the fabric of your life when you grow up in West Lafayette and your dad’s on the faculty,” Steve Schwartz says. “I’m grateful to the University for everything it gave me — my education, my siblings’ education. We all took so much from Purdue. It’s important to give something back.”

When he learned about Elmore’s matching funds, Steve Schwartz decided that now was the right time to contribute. He matched half of Elmore’s gift, turning a $750,000 donation into a $1.5 million professorship named in his parents’ honor: The Richard J. and Mary Jo Schwartz Professor of Electrical and Computer Engineering.

“Contributing was always on my ’when I can, I will’ list,” he says. “Because of Bill’s generosity, there was no longer any reason to wait. I was able to give back sooner rather than later. And having a chance to do something like that for your parents — it’s hard to describe how that feels.” 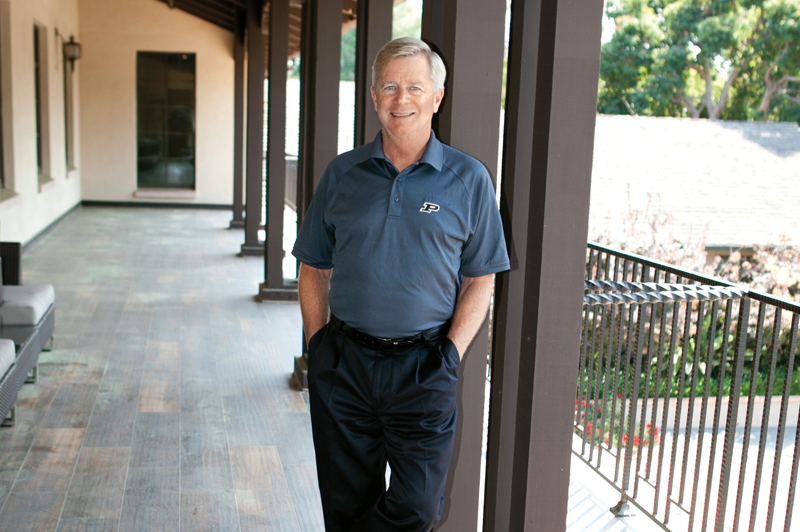 A Gift that Moves Purdue Forward

Dick Schwartz had no problem describing his feelings when he learned about his son’s gift — “shocked” and “deeply honored” topped the list. He also was quick to point out that a named professorship represents an excellent investment in the future.

“I had a lot of experience hiring faculty over the years, and it’s a great help in both attracting and retaining outstanding professors,” he says. “A professorship is a very public means of recognition. It provides funding they can use for startup projects and to support graduate students. It gives them the freedom to do what they need to do.”

For Balakrishnan, the Richard J. and Mary Jo Schwartz Professorship has added meaning beyond helping with immediate needs in faculty recognition and retention.

“Dick Schwartz was the head of ECE when I was hired back in 1994,” he says. “I have always looked up to Dick, and it is deeply satisfying to me that his impact will be forever remembered through this professorship.”

Dick Schwartz also appreciates that Elmore’s matching funds extend the opportunity to make a difference to others.

“It’s very insightful of him in terms of creating something that can help Purdue move forward,” he says. “Bill’s been a very loyal ECE alum. It’s an honor for us to be associated with him.”

Contributions to the endowment produce a permanent supply of income, which means these named professorships will still be funded 100 years from now. That’s very satisfying.

That feeling is mutual. Elmore is thrilled that the Schwartz family is the first to take advantage of his matching gift opportunity.

“I’m so pleased that Steve has stepped forward to establish this professorship in honor of his parents,” he says. “Dick was the guy who made the whole ECE area happen for so many years. We all owe a lot to him. He deserves this honor.”

Elmore hopes others soon will follow suit, stressing the long-lasting benefits of a gift to the endowment.

“The funds are in good hands, and they’ll continue to grow over time,” he says. “You can count on your gift to be enduring. Contributions to the endowment produce a permanent supply of income, which means these named professorships will still be funded 100 years from now. That’s very satisfying.”

Ultimately, all four men agree that maintaining the caliber of the faculty in ECE — and across the College of Engineering — will pay big dividends down the road.

“Purdue already offers one of the best electrical and computer engineering programs around. I’d like to see it ranked the No. 1 ECE school in the nation,” Dick Schwartz says. “Donations like these go a long way toward making that a reality. They help you bring in good faculty, which brings in good students, which leads to a good reputation. It feeds on itself.”

To take advantage of the matching gift funds or support other initiatives in the School of Electrical and Computer Engineering, contact Andrea McIntyre, senior director of development, at 765-494-9945 or AJMcintyre@prf.org.