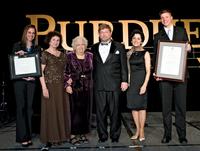 Steve Swanson is giving back so somebody else can benefit from a Purdue education as much as he did. Swanson is supporting a professorship in chemical engineering with a generous gift.

“I came to Purdue in 1967 from out of state,” says Swanson. “I didn’t have any money to pay for school so I had to borrow and I had to work. I had two or three jobs while I was a student at Purdue.

“Purdue made room for me. They made a spot for me to get an education. Chemical engineering gave me an exceptionally good education and now I’m in a financially secure position and I feel I should give something back.”

Swanson earned all his higher education degrees — bachelor’s, master’s and Ph.D. — in chemical engineering at Purdue. He then embarked on a 33-year career at Shell Development.

“I want somebody else in the future to stand up and want to give back for the opportunity they received.”

After leaving Purdue in 1975, he started at Shell as a research engineer in its chemical division. He eventually became manager in that same division, led the startup of a chemical plant in Louisiana, managed process engineers in the research division and was a process manager for a chemical unit in the U.S. After his experience in manufacturing, he returned to head the Office of Process Engineering to manage process engineering for major projects for Chemicals in the U.S. When Shell globalized Chemicals, he was made the global manager.

“When I retired, I was global manager of process engineering for major projects for Chemicals only,” he says. “My unit would do design for the new chemical plants. We were the last ones to look at it or work on (the design) before Shell built it.

“We had people all over the world — the Netherlands, India, Malaysia — and I loved that global travel. That’s a real kick.”

Though retired from Shell, Swanson is still active in the field by working as a consultant. He also is still connected with Purdue.

“I’m working on a course with two Purdue graduates on process safety,” he says. “Deb Grubbe, Ron Cutshall and I are helping to develop a course on process safety for the School of Chemical Engineering. It will be offered in the spring semester of 2011.”

He’s enjoyed working with the course and would like the focus of the professorship he supports to be in teaching.

“Research is great,” he says. “I love research. I did a lot of it when I was a Ph.D. student, but I hope to foster the fact that if we grow kids who can go out and be successful, Purdue will have more people who will come back and give something. I want somebody else in the future to stand up and want to give back for the opportunity they received.”