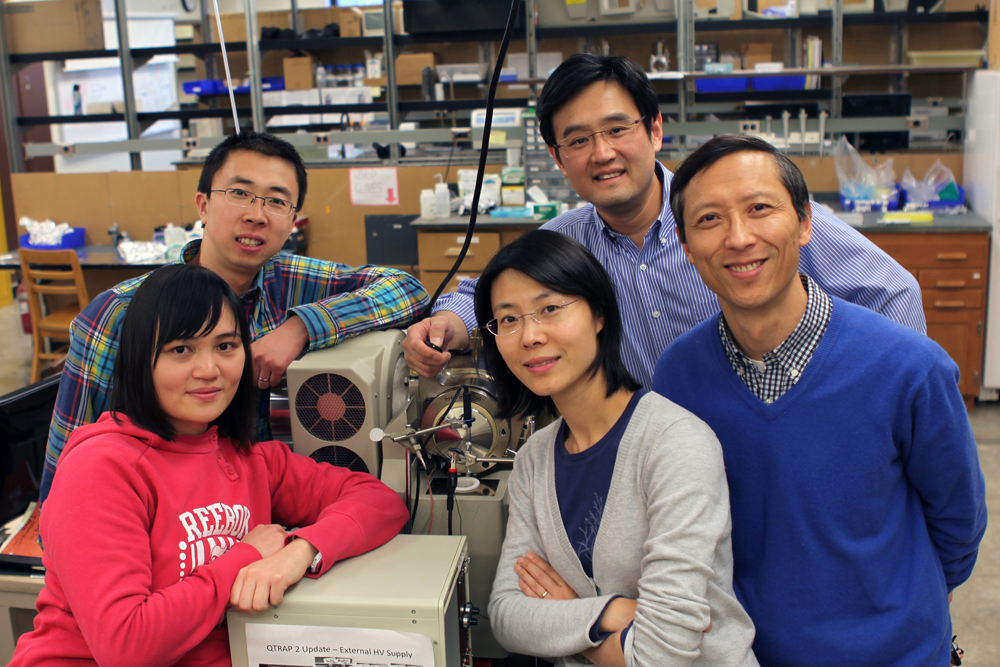 Researchers have developed a new analytical tool for medical applications and biological research that may one day be used to diagnose cancer more rapidly than conventional methods.

Researchers have developed a new analytical tool for medical applications and biological research that may one day be used to diagnose cancer more rapidly than conventional methods.

The research has implications for the field of lipidomics, which involves the identification and quantification of cellular lipid molecules, how they interact with other components in cells and their role in biological systems.

“Lipidomics is a big field because changes of the lipid profile are related to the disease state or different stages of cells, so this is an important tool for either diagnostics or for systems biology,” says Yu Xia, associate professor in Purdue’s Department of Chemistry.

The new approach is the first to easily pinpoint the location of double bonds between carbon atoms in lipid molecules, allowing the identification of “isomers,” a capability that could lead to the early diagnosis of cancer.

“The ratio of these isomers in normal tissue and tumor tissue can be different, significantly different,” Xia says.

Research findings were detailed in a paper that appeared online Feb. 22 in Proceedings of the National Academy of Sciences.

“The location of double bonds is related to the biosynthetic pathway, or how the lipid was generated in your body, and this is related to the disease status and also the status of the cell biology,” says Zheng Ouyang, professor in Purdue's Weldon School of Biomedical Engineering, Department of Chemistry and School of Electrical and Computer Engineering.

Lipids are important components of living cells and include fats, oils and waxes. They may exist as isomers, which have identical mass but possess subtle structural differences not easily detected by conventional analytical technologies. The new tool uses techniques called tandem mass spectrometry and the Paternò–Büchi photochemical reaction. In tandem mass spectrometry, charged molecules are fragmented into pieces, which are then measured and identified by their mass.

“Mass spec shows isomers as exactly the same molecular mass, so you are not able to see how much of which isomers are in tissue. But now we have a way to solve that problem,” Ouyang says. “And we have found that the ratio of these isomers can be different between normal tissue and diseased tissue.”

The researchers used a so-called “shotgun lipidomics” analysis enhanced by the Paternò–Büchi photochemical reaction, which modifies double bonds into rings that can then be easily cleaved into two parts. This allows the bonds to be measured and identified using mass spectrometry.

“Then we can derive the location of the double bond,” Ouyang says. “That’s why this reaction is so important.”

The system was demonstrated with brain tissue from rats and also was applied to breast cancer tissue from mice. The researchers also used the method to study liver and kidney tissue and plan to include prostate cancer tissue in future research. This method has two primary benefits.

“One is as a new tool for biologists, to relate the isomeric ratio to the system biology and cell biology,” Ouyang says. “The second is to identify biomarkers for fast diagnosis of disease.”

The method can be completed within hours, starting with small amounts of tissue — tens of milligrams — compared to weeks and hundreds of milligrams using conventional analytical techniques.

“More importantly, traditionally there has not been a good method for quickly distinguishing the unsaturated lipid isomers regardless of the amounts of tissue used,” Ouyang says. “We believe that the research community may now use this approach to discover biomarkers and eventually apply it to diagnosis.”

“Direct analysis using ambient sampling methods will further speed up the analysis process from hours to a minute,” Ouyang says. “We want to apply this to imaging to study tissue, and we currently are integrating this method into miniature mass spectrometry systems. Eventually we hope to have biologists and medical professionals using it.”

The system was used to identify 96 unsaturated fatty acids and glycerophospholipids in the brain tissue of rats, revealing that 50 percent of the lipids were mixtures of isomers characterized by the location of their carbon-carbon double bonds.

The researchers have filed a U.S. patent application on the technology through the Purdue Research Foundation’s Office of Technology Commercialization. Ouyang is president of the company PURSPEC Technologies Inc., which is working to commercialize the analytical technology and the miniature mass spectrometer.