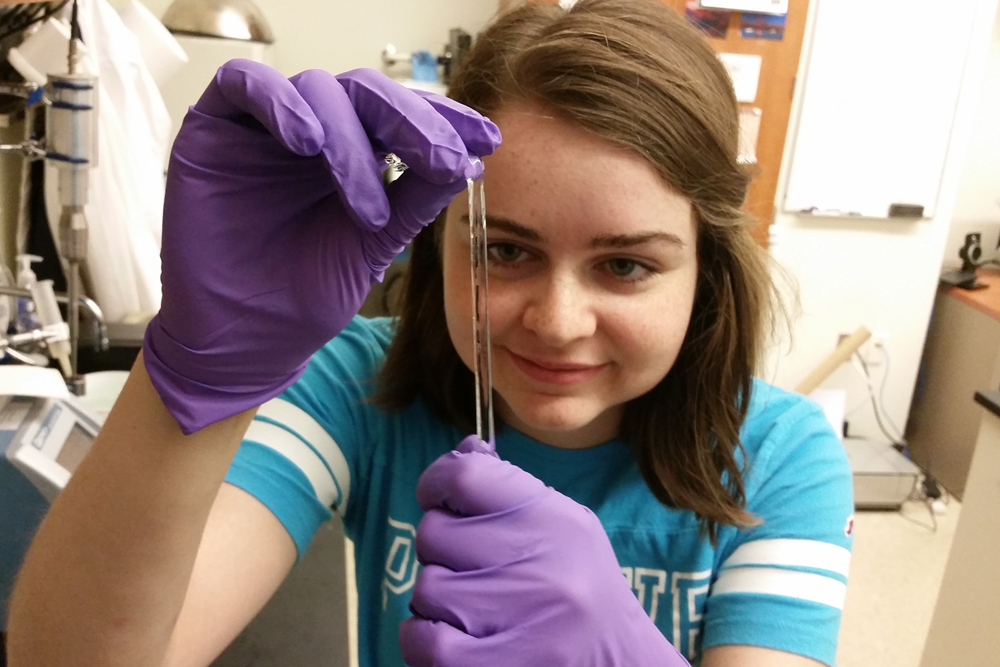 Since 2003, Purdue’s Summer Undergraduate Research Fellowship (SURF) program has opened up world-class labs across campus to undergraduates curious about discovery. Through 11 weeks, they learn research protocol, work alongside faculty and graduate student mentors, and attend seminars to learn more about the myriad research projects underway at Purdue.

Since 2003, Purdue’s Summer Undergraduate Research Fellowship (SURF) program has opened up world-class labs across campus to undergraduates curious about discovery. Through 11 weeks, they learn research protocol, work alongside faculty and graduate student mentors, and attend seminars to learn more about the myriad research projects underway at Purdue.

For Victoria Messerschmidt, a senior in biomedical engineering, and Hannah Brown, a junior in mechanical engineering (pictured above), the scholarship opportunities afforded by SURF may very well set them on a further path of research — to graduate schools and beyond. Their discoveries could someday also change the world.

Messerschmidt had open heart surgery when she was four days old. She grew up learning about the potential serious consequences of an early illness that could have led to developmental delays. These days, with the possibilities of graduate school and a research career ahead of her, she’s using that health care scare from her past as motivation for helping others in need of biomedical breakthroughs.

A Philadelphia native, Messerschmidt developed the penchant for science and engineering that brought her to Purdue, where she enrolled in the Weldon School of Biomedical Engineering. The SURF program allowed Messerschmidt to work with Alyssa Panitch, the Leslie A. Geddes Professor of Biomedical Engineering. She joined Panitch’s group at the beginning of a project focused on lessening the dangers of dialysis. Most people suffering from kidney failure undergo hemodialysis to filter toxins from their blood. Although that toxin removal is critical for survival, the treatment often involves creation of an ateriovenousfistula, or AVF, where an artery and vein are surgically connected to use dialysis. It can be a matter of picking your poison. The AVFs have a failure rate of 50 to 60 percent, often associated with damage to endothelial cells in the process.

“The endothelial cells are very sensitive and important in protecting a body from blood poisons and diseases,” Messerschmidt says. “They’re also very tightly connected, only allowing certain small molecules to pass through. Diabetes and other diseases that increase the blood sugar in the body can disrupt the endothelial layer, making it easier for other things to come into the tissue.” Inflamed or narrowed vessels, unaccustomed to the intense pressure of dialysis, provide openings for other dangerous chemicals; support thrombus formation, or blood clots within the vessel; and support further inflammation that can cause blood vessel narrowing. Panitch’s team addresses endothelial dysfunction by attempting to mimic the function of glycocalyx, a protective polysaccharide layer on the cells. The researchers have created several synthesized versions of glycocalyx, which could ultimately create a healthier vessel of hemodialysis.

Messerschmidt pitched in to help oxidize certain chemicals that could be bonded to receptors that reduce inflammation and help improve the success rates of AVF. The introduction to the microscopic project has helped further her desire to continue the work. “It’s all part of regenerative medicine,” says Messerschmidt, who plans to attend graduate school after her May graduation. “I’ve also worked within the macroscopic, which involves whole organ regeneration.”

Brown has long been enthusiastic about robots. As part of a high school Science Olympiad team in Bloomington, Indiana, she and two other students built a working robotic arm that could move around and pick up objects. After taking a tour of the Faboratory, Professor Rebecca Kramer’s soft robotics research lab, Brown applied for the SURF scholarship and has been working there since summer 2015.

Kramer, assistant professor of mechanical engineering, is quickly gaining national attention for her work in soft robotics and innovations in manufacturing. “The challenges we encounter have to do with soft material manufacturing,” she says. “We want to build robots that leverage soft and responsive materials, but these materials are typically very difficult to manipulate. We invent new ways to process these materials, which leads to new devices that weren’t possible to make before.”

For Brown, as for any student researcher in Kramer’s lab, the ongoing challenge is to replace hard devices with soft devices. “You can’t put something like a DC motor in a soft robot,” says Brown, who is often tasked with trying to make actuators and sensors from hydrogels or liquid metals. “I think the biggest challenge is durability. It’s difficult to make sensors durable enough to put on a robot and gain meaningful research.” Still, that trial and error of the discovery process is what brings Brown back to the lab, updating Kramer with her progress along the way. She tests samples for conductivity and then examines how each reacts to outside pressures. “Hannah is very self-motivated, which is a really important trait within an academic research setting,” Kramer says. “She really stands out as an exemplary undergraduate researcher.”

The next major move on the Faboratory front may come with wearable robots. “As our components become easier to make and more robust in operation, we’ll be able to start demonstrating integrated soft robots,” Kramer says. “We have a large focus on fabrics and functionalized fibers and are eager to showcase our technologies in the wearables space.”

Those discoveries could also lead to entrepreneurship opportunities, and that’s something students approach Kramer about quite often.

For all the hard work, the rewards are many for both the benefit of society and the young researchers themselves. The SURF program not only inspires students along a research path, but fosters the high-tech teamwork needed for such challenges in health care and manufacturing.

Whether it’s through SURF projects or other ongoing undergraduate research opportunities, Panitch sees the lab work as an educational extension of the classroom. “I like to ask the graduate students to mentor the undergraduate students,” she says. For graduate students like James Wodicka, the MD/PhD student in biomedical engineering who worked with Messerschmidt, training younger students reinforces his own learning. Panitch views that mentorship opportunity as a way to cement techniques and laboratory methods in the minds of graduate students. In addition to giving undergraduates a taste of the trials and errors involved in a research setting, Panitch believes another set of hands, as with Messerschmidt, can help to expedite any project. “I think Victoria worked very hard and learned a lot, which is a big win all around,” she says. From Kramer’s perspective, the naturally inquisitive nature of undergraduates such as Brown is propelling the work of the Faboratory. “These students really help contribute to the big picture,” Kramer says. “Purdue’s undergrads are brilliant and able to contribute at a high level.”

And both Brown and Messerschmidt want to take research to the next level, as both consider graduate school options. For each, there’s a personal involvement with the subject matter.

“There’s just something so fascinating about robots,” Brown says. “We can make something that can move and do specific tasks that aren’t just repetitive. This is going to be a big part of our future and I want to be a part of it.”

As for her own research future, Messerschmidt would like to pay it forward with appreciation for the heart surgeons who saved her life when she was not yet a week old. “Without those doctors, I wouldn’t be here,” she says. “I want to help people who are on kidney dialysis or on the transplant list.”