Beginning in September, to celebrate Indiana’s bicentennial anniversary, some 1,800 relay participants will carry an Olympic-style torch 2,000 miles through all 92 Indiana counties.

Beginning in September, to celebrate Indiana’s bicentennial anniversary, some 1,800 relay participants will carry an Olympic-style torch 2,000 miles through all 92 Indiana counties. From the original capitol in Corydon to Indianapolis, the torchbearers could be on everything from feet to rollerblades and in everything from buggies to Indy race cars. Not surprisingly, the Indiana Bicentennial Commission called on Purdue to create not just one torch but three: one that will be used during the relay, another for children and a third that will carry a flame at high rates of speed.

For Timothée Pourpoint, associate professor of aeronautics and astronautics, even this fun project required the utmost seriousness. His role has been to manage the torch projects and serve as the point of contact for the state. “It’s actually one of the most public projects I’ve ever worked on,” he says. “We had to deliver a product that’s both robust and beautiful. For Purdue to be involved is absolutely fitting. We’re a top engineering school in the country and the world. For us to design it is a great honor.”

Pourpoint says the students understand the project’s importance as evidenced by the growing number of those involved who have embraced the technical challenges enthusiastically. On Dec. 11, the multidisciplinary teams, which include students from Purdue’s renowned EPICS (Engineering Projects in Community Service) program, presented Indiana Gov. Mike Pence with working prototypes of the two torches that will be used during the relay.

Pourpoint knows his way around flaming objects. His research on combustion devices such as rocket engines, with an emphasis on the development of hypergolic propellants, has made him a go-to expert in the field. His team once coordinated a fire effect set to music. Imagine a Las Vegas-inspired fountain and light show, but instead of water, the sounds are accompanied by bursts of flames.

In leading the effort to create a high-tech flame that honors the torch represented on the state’s flag, the teams weighed several design factors. The safety concerns of producing a lighted torch are paramount, Pourpoint says, for both participants and any onlookers. The student designers also considered the size of the torch without knowing the measurements of the many handlers over the relay course. So center of gravity issues became important as well.

The torch includes several technical features, such as a GPS transmitter and a digital camera. The most challenging objective may have been building a torch that would keep burning against the wind while held outside the cockpit of an Indy car circling the Indianapolis Motor Speedway track at 200 mph. “With that it had to resemble an afterburner on an aircraft engine,” Pourpoint says. “But that’s something we’re fairly used to designing.”

Working through his December graduation on the flagship torch, Timothy Madzey (AAE ’15), who also served as a research assistant in the Composite Materials Laboratory, hopes the experience will be a primer for his forthcoming career in industry. “The project involved an interdisciplinary, high-profile product that needed to be delivered to a high-profile client,” he says. “With stakes like that, it’s paramount to ensure final product quality and appropriate communication throughout the process.” 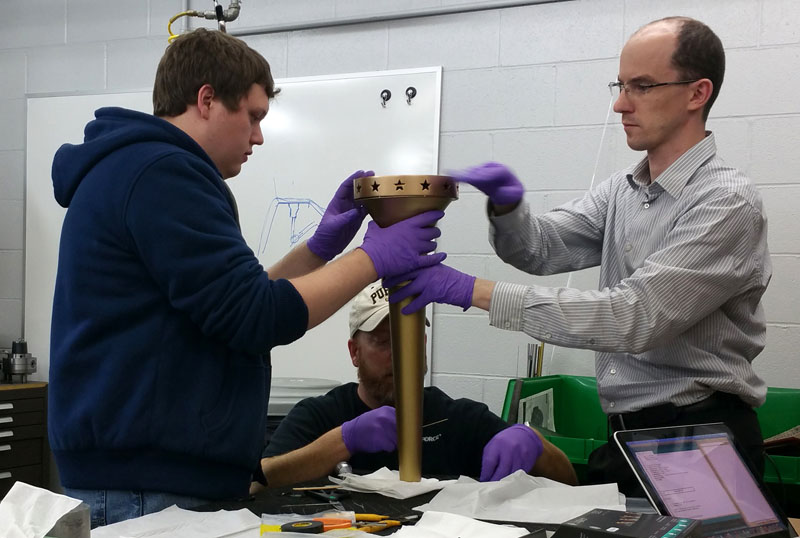 Sean Brophy, associate professor of engineering education, has served as an advisor on several EPICS projects in his decade at Purdue. In addition to the service component of delivering an engineered solution to a real-life client, Brophy wants students to better understand and manage the design process. “I want them to become good engineers who can think very systematically about complex ideas and come up with an elegant design that meets all of the different criteria,” he says.

Part of the process of becoming a better engineer goes back to Brophy’s research on adaptive expertise. “One of the hardest things for us to do as individuals is to get beyond our own perspective,” he says. “It’s also a big challenge for engineers. The notion of ’what I would want’ is kind of their first impetus. But through client discovery, you have to listen to someone else to get their perspective. For many students, it’s the first time they’ve used this thoughtful and systematic approach.”

The child-friendly torch contains LED lights instead of a real flame and weighs less than a pound. To extend the educational outreach opportunities, Brophy helped connect the EPICS team with Sunnyside Intermediate School in Lafayette. In what could become a statewide relay of its own, Sunnyside introduced the state’s bicentennial celebration into its curriculum while possibly laying the groundwork for a program that other schools could use.

Brophy says this multilayered benefit helps educate people about advanced technologies and Indiana history and allows the Purdue students to learn something outside of their own campus classrooms. “Any project is about really understanding the true problem and what the goals are,” he says. “Students are always very anxious to jump right in. We’re trying to get them past their first ideas and think of other options.” 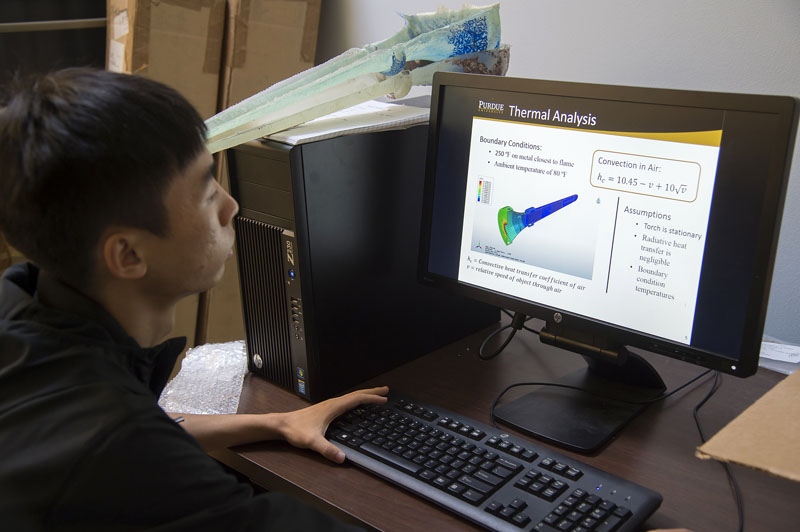 Engineering student Tainyu Xu looks over an analysis of the heat expected to be emanating from the Bicentennial torch prototype.
(Purdue University photo/Mark Simons)

Madi Rogers, a first-year engineering student who plans to study biomedical engineering, jumped into an EPICS team that already had been working on a kid’s torch. As the communication liaison and design lead for the education and outreach team, Rogers became a vital contact point between the community partners, Sunnyside and the Indiana Bicentennial Commission, and the engineering teams.

“As an inexperienced freshman thrown into such a notable project, I had to learn the design process pretty quickly,” Rogers says. “Not many students, and even fewer freshmen, have the opportunity to be involved with a community service project. From learning how to collaborate with others to improving my communication skills, I have definitely embraced what it means to be an engineer.”

Rogers says the EPICS team worked through several design prototypes in coming up with something that could be easily made and possibly mass-produced. “It seems like a simple task,” she says, “but the 3-D printed torch with working electronics and replaceable batteries is much more than a glorified flashlight.”

With prototypes approved and presented to the governor, the EPICS team is now looking into a commercial version of the kids’ torch. To that end, Brophy says, the teams are working with students from materials engineering to learn more about advanced manufacturing techniques, injection molding, and of course, how to keep it made in Indiana.