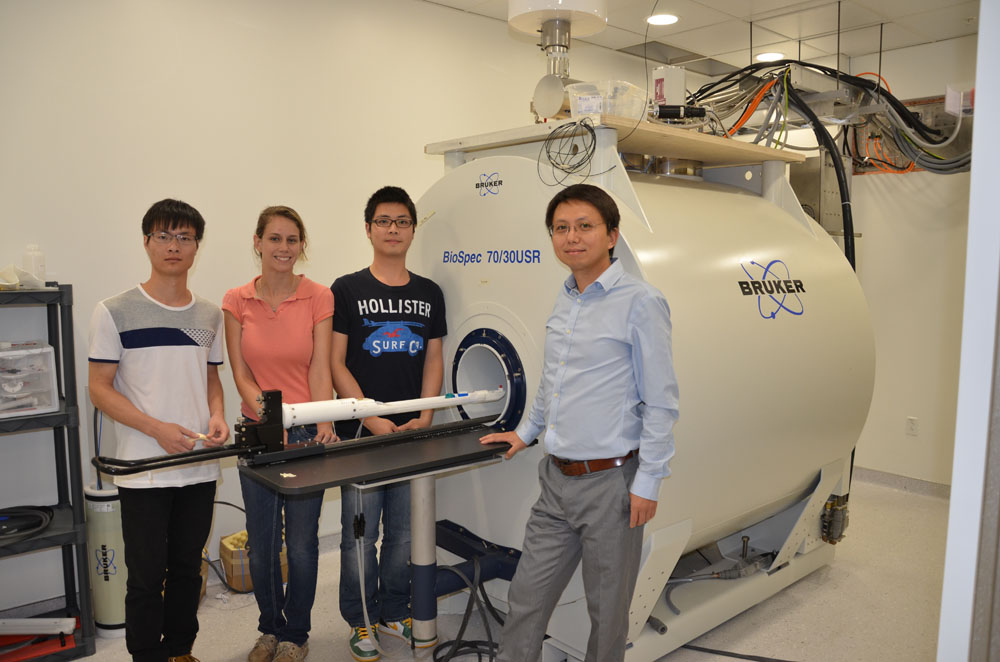 Our fingerprints identify us, and that’s about all they can do. Zhongming Liu gathers far more useful kinds of fingerprints - maps of neural circuitry and activity in our brains, which will truly characterize us and help us understand and treat mental illness and neurological disorders.

Our fingerprints identify us, and that’s about all they can do. Zhongming Liu gathers far more useful kinds of fingerprints — maps of neural circuitry and activity in our brains, which will truly characterize us and help us understand and treat mental illness and neurological disorders.

“Neural circuitry is like a traffic network in a city,” says Liu, assistant professor of biomedical engineering and electrical and computer engineering. “If we can define that neural network, we can make inferences about a person’s characteristics such as their behavior, perception and cognition, and their risks of developing neurodegenerative disease.” 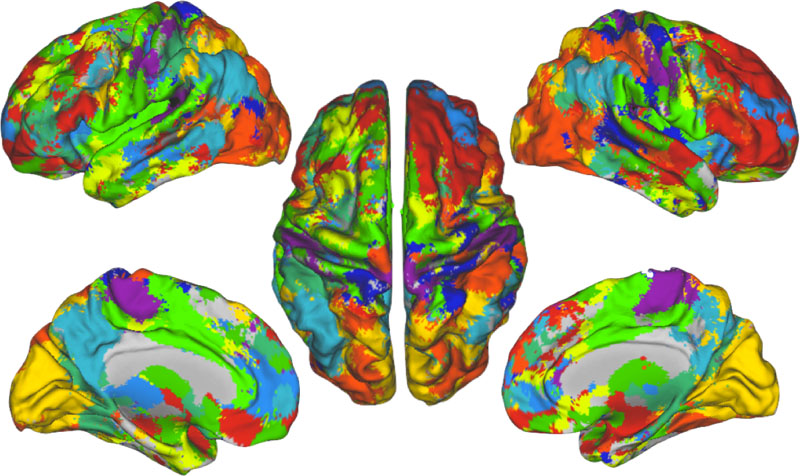 The brain’s “spectral fingerprints” are obtained with integrated imaging that combines simultaneous fMRI and EEG acquisition.

In one project funded by the National Institute of Mental Health, Liu’s lab is developing a novel form of “hyperspectral” imaging that integrates multiple technologies to map the whole brain. From fMRI come large-scale but slow images of neural activity. Electroencephalography (EEG) adds data on a faster timescale but with less spatial resolution. Diffusion MRI, which measures how water and other molecules spread through tissues, adds information about the brain’s physical connections. Finally, susceptibility MRI, which offers extremely sensitive detection of microstructural content such as iron and myelin, presents a high-resolution view of individual brain regions.

“This hyperspectral imaging is all in a single technical framework to map neural circuit structures and dynamics, and combine the structural and dynamic information into a brain fingerprint unique to each individual,” Liu says. “Collecting and relating all this information is both a scientific challenge and an engineering challenge, and we are addressing both problems.” 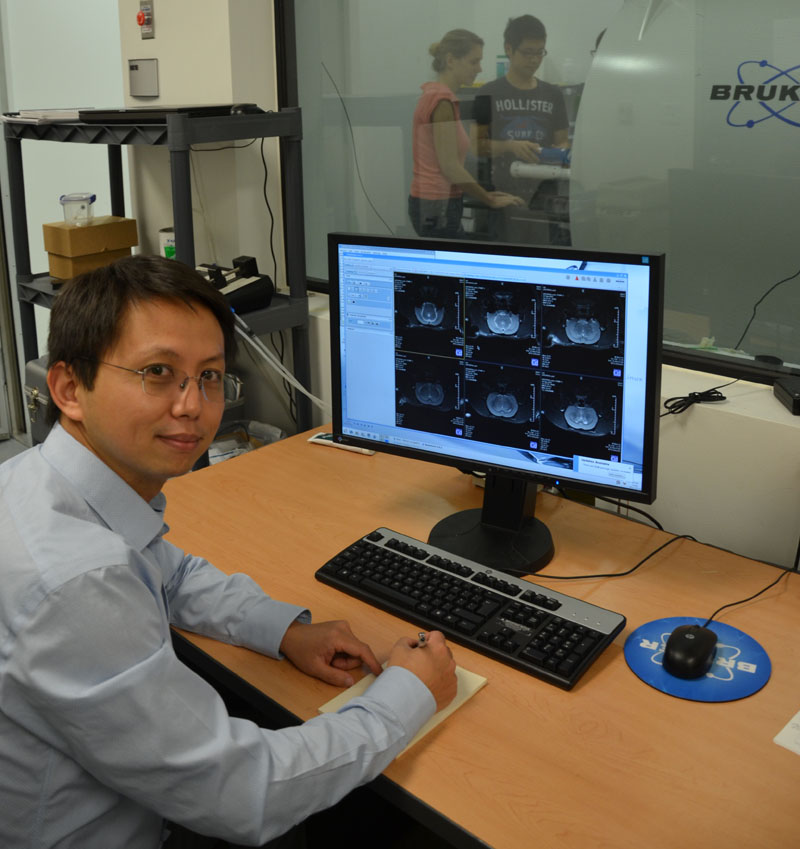 Among its potential applications, the hyperspectral imaging platform may allow early diagnosis of neurodegenerative diseases.

The lack of early detection is a huge problem with these illnesses. Alzheimer’s disease, for instance, is diagnosed only when a person’s behaviors change, and these changes typically become clear only when the condition is far advanced.

“But if we can track how a brain fingerprint progresses over its lifetime, we can detect the signature of a neurological disease and predict it as early as possible,” Liu says. “Ideally, if there’s an early diagnosis, a person then could get an individualized treatment plan.”

Liu’s lab is now imaging how neural circuits progress and evolve throughout the lifetimes of rats and mice as animal models for human neurodegenerative diseases, and comparing the results with those from healthy control animals. This research method offers the potential not only to provide early diagnoses but also to assess the effect of treatments given at different stages of the disease, he says.

Liu’s lab also studies inflammation in the brain and the body, examining cellular and molecular biomarkers to assess its severity and distribution using noninvasive imaging. “This is a really complex and distributed process,” he notes, adding that scientists at Purdue are uniquely positioned to tackle this challenge. Collaborators on the project include Pedro Irazoqui, professor of biomedical engineering and electrical and computer engineering; Terry Powley, the Ben J. Winer Distinguished Professor of Psychological Sciences; and J. Paul Robinson, professor of biomedical engineering and SVM Professor of Cytomics.

Among all of Liu’s ambitious projects, however, perhaps the most dramatic is a “brain decoding” effort that employs fMRI to observe neural activity in the brain and then use those observations to virtually reconstruct what people see. For example, if you watch a movie, the imaging analysis could be manipulated to generate a version of how that movie appears to you, Liu explains. 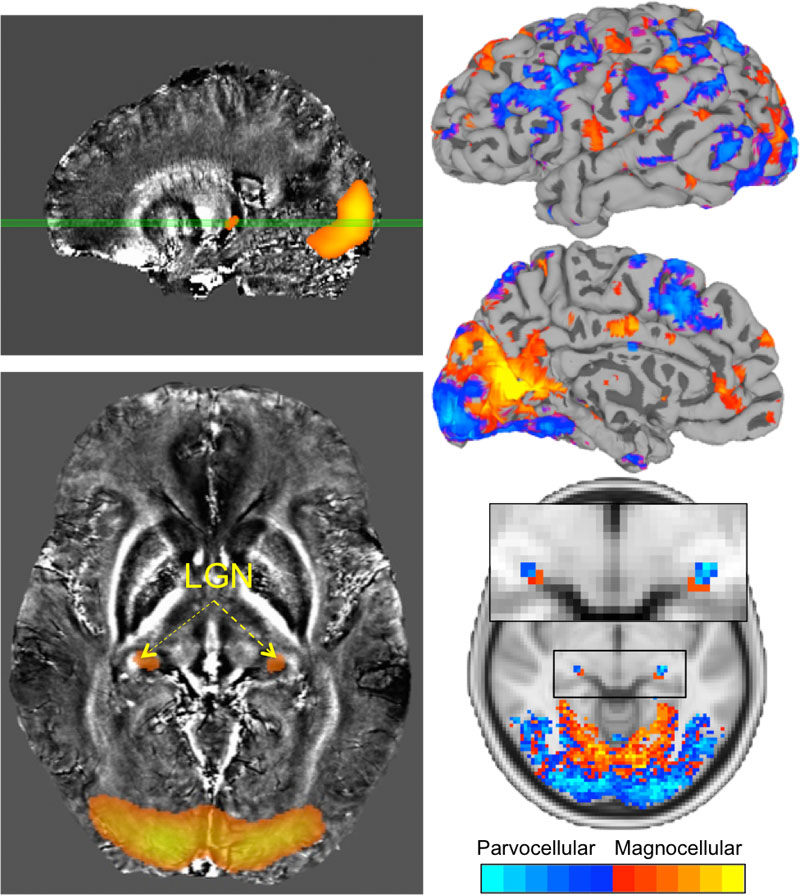 “To decode activity and reconstruct what people see is a complex project that involves a lot of machine learning and signal and image processing,” he says. “We have made very encouraging progress and we think we can do it before long.”

“Purdue is an amazing environment for biomedical imaging and neuroengineering research,” he adds. “The existing and expanding human and animal MRI facilities are great resources that enable all my research. And I am fortunate to be part of the Weldon School of Biomedical Engineering, the School of Electrical Engineering and the Integrated Imaging Cluster. All bring together cutting-edge technologies and expertise to create unique opportunities in this early stage of my career.”