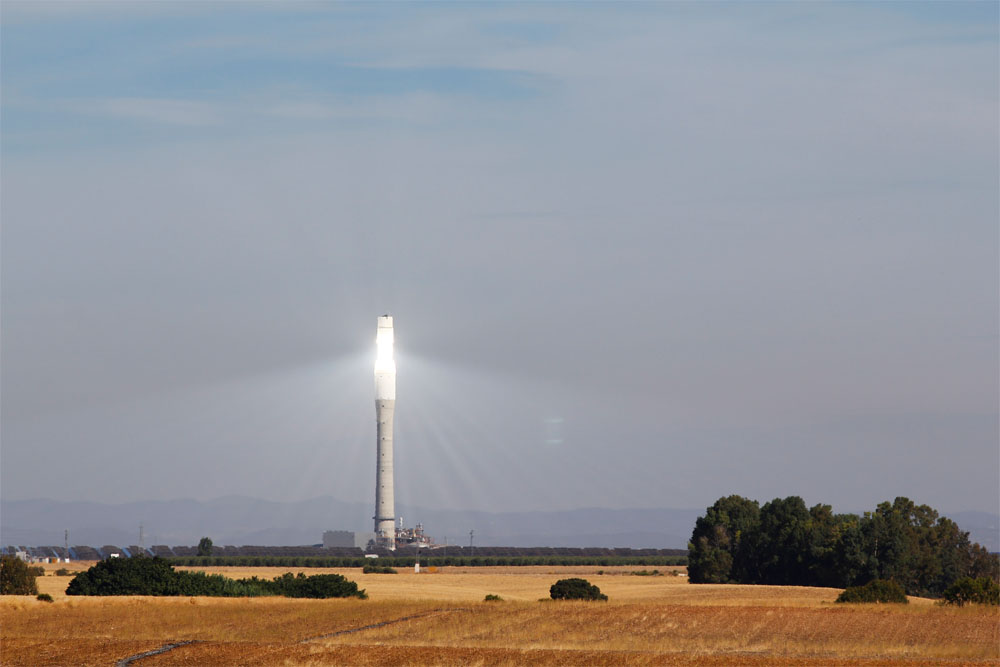 Purdue University is leading a federally funded project with two other universities to develop an advanced heat exchanger for concentrated solar power (CSP) technology. The team aims to develop a scalable manufacturing process for generating new, more robust materials for this critical component of CSP plants and other large-scale power plants.

Purdue University is leading a federally funded project with two other universities to develop an advanced heat exchanger for concentrated solar power (CSP) technology. The team aims to develop a scalable manufacturing process for generating new, more robust materials for this critical component of CSP plants and other large-scale power plants.

The “power tower” system, a prominent type of CSP plant, uses an array of heliostats (mirrors) to focus sunlight to a solar receiver located at the top of a tower (Figure 1). The receiver transfers this heat to a high-temperature liquid (e.g., a molten salt). This liquid is then routed to a heat exchanger that transfers the heat to another fluid (e.g., supercritical carbon dioxide), which is then used to drive a turbine to generate electricity. 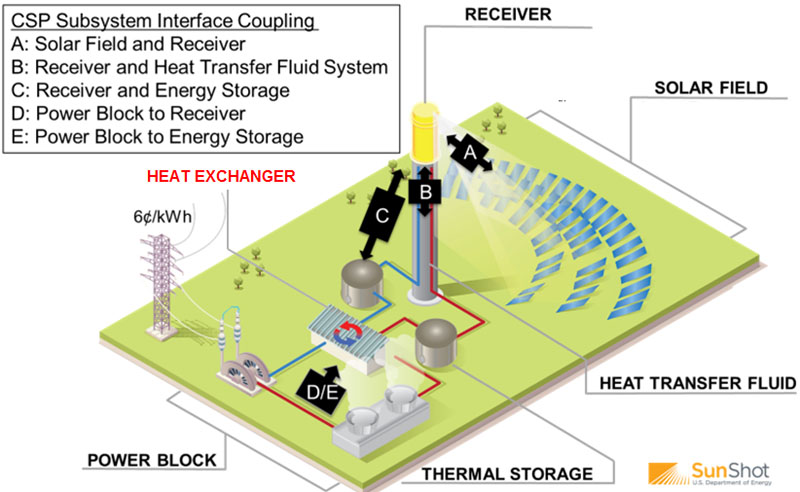 “The heat exchanger is one of the critical choke points in the concentrated solar power system that needs to be enhanced to make this technology cost-effective,” says Kenneth Sandhage, the Reilly Professor of Materials Engineering.

Purdue, working with the Georgia Institute of Technology and University of Wisconsin, is developing a manufacturing method to produce such robust heat exchangers.

The project is among those announced in September by the White House, providing more than $52 million to fund 22 projects in partnership with companies, nonprofit organizations, universities and national laboratories. The aim is to make solar energy more affordable and accessible across the nation.

Fourteen SunShot projects are striving to break through cost barriers to spur commercialization of CSP technology, which is potentially practical because it can store solar energy for use when the sun is not shining. To support further cost reductions in CSP technology, the 14 projects address technical challenges in subsystems of a CSP plant, including solar collectors, receivers, thermal energy storage, novel power cycles, and operations and maintenance. These research and development projects were established to improve the performance and increase the efficiency of CSP plants overall.

The power tower system is designed to use solar energy to generate a high-temperature liquid, such as a sodium chloride-based salt, that is then transferred down the tower and either stored in tanks for use later or circulated through the heat exchanger, where heat would be transferred to a working fluid, such as supercritical carbon dioxide (SCCO2), which would then power turbines to run generators. The heat exchanger is made of many thin-walled, thermally conductive plates containing channels for the circulating fluids.

Supercritical carbon dioxide is a fluid under high pressure and temperature — above the “critical point” — that exhibits properties of both a liquid and a gas. “It’s like a very dense gas, which makes it an effective fluid for pushing turbine blades and generating electricity,” Sandhage says. “At the same time, if you want to run a turbine engine more efficiently, you prefer to provide heat to the engine at a high temperature. The hotter you run it, the more efficient the engine may be.”

The Purdue-led team plans to produce compact heat exchangers made of high-temperature composite materials and demonstrate the heat-transfer capabilities of such materials for use in SCCO2 cycles at 800 C.

“These materials do currently exist but have not previously been produced in a cost-effective manner,” Sandhage says. “The proposed composites are high-melting, thermally conductive, resistant to thermal shock, and exhibit high strengths at elevated temperatures. The phases within these composites are either known to be resistant to corrosion by molten salts at high temperatures or are expected to be so on the basis of thermodynamic calculations. Resistance to oxidation in SCCO2 at 800 C will be achieved through the use of tailored operational conditions or tailored surface chemistries.“

The goal is to generate electricity at a cost of 6 cents per kilowatt hour, which would be competitive with fossil fuels. Current heat exchangers for the power tower design are limited to operating around 600 degrees C. Increasing the operational temperature of the heat exchanger to 800 degrees C would result in an appreciable enhancement of the system efficiency, which would be an important step toward the 6-cent goal. However, conventional metal alloys now in use cannot withstand such high temperatures while circulating high-pressure supercritical carbon dioxide.

“Operating at around 600 degrees C can result in an efficiency of up to about 45 percent, but if you can push the temperature higher with supercritical carbon dioxide, then efficiencies of 60 percent may be achieved, and that can get you closer to 6 cents per kilowatt hour,” he says. “We propose to produce robust composites in complex 3-D shapes using a patented, shape-preserving chemical reaction process. Preforms in the desired 3-D shape are first produced by a scalable, cost-effective forming operation. The shaped preforms are then allowed to undergo a chemical reaction process to yield the desired high-temperature composite materials. The final composite retains the 3-D shape and dimensions of the starting preform. This reaction process is readily scalable, both in part size and in throughput, and initial estimates suggest that this process can yield the desired high-temperature composites in a cost-effective manner.”

The researchers will strive to demonstrate the scalability of the new manufacturing method and the material’s suitability for the heat exchangers.

“Our job in this DOE SunShot project is to remove risk,” Sandhage says. “We intend to demonstrate that this material is sufficiently rigid, thermally conductive and corrosion-resistant, and that we can manufacture such robust materials in a cost-effective manner. Successful completion of this project in three years would then allow us to move forward to the next level, involving larger-scale components for a scaled-up prototype demonstration, on the pathway towards commercialization of such technology.”