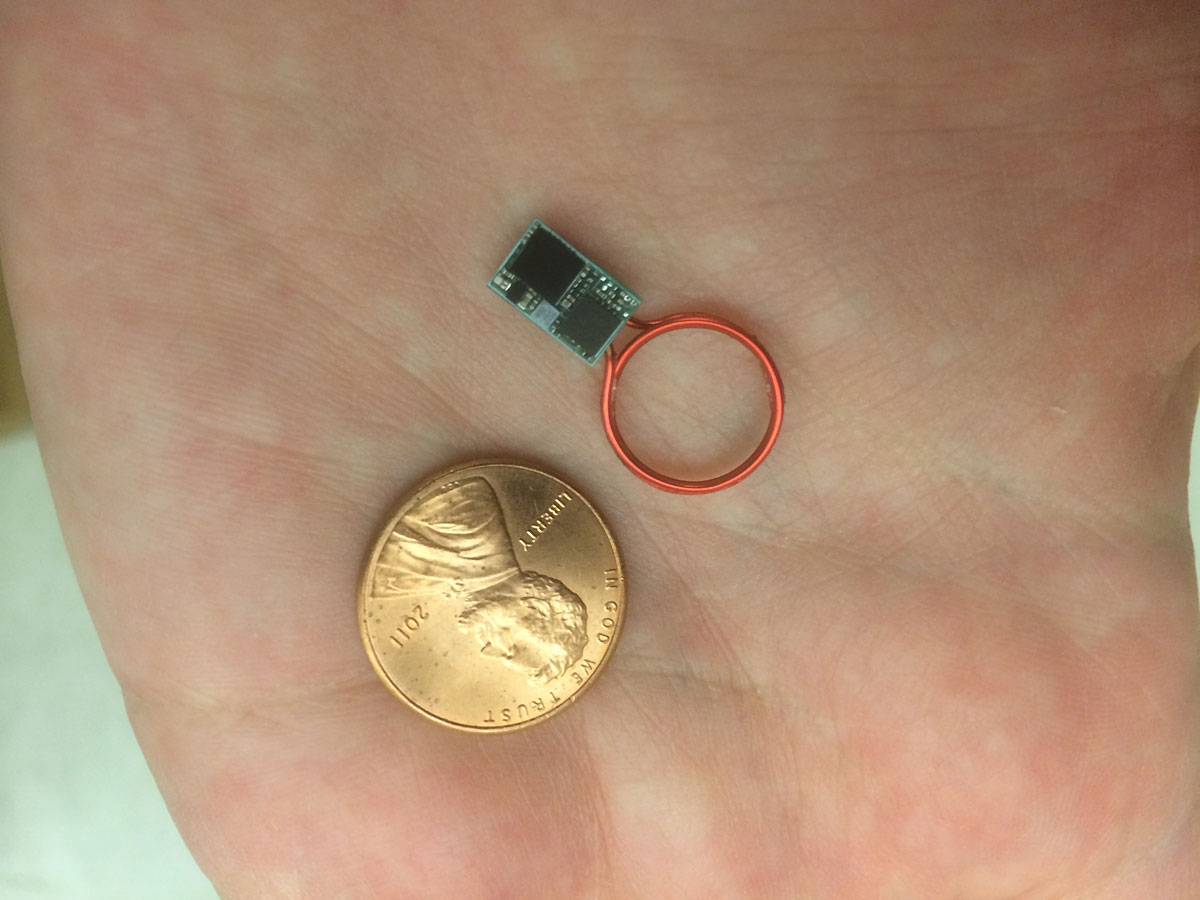 A preeminent research team led by Pedro P. Irazoqui, director of Purdue’s Center for Implantable Devices, associate professor in the Weldon School of Biomedical Engineering and associate professor in the School of Electrical and Computer Engineering, is making progress in developing wireless implantable medical devices for treatment of a variety of conditions using wireless networks of nanoelectronic sensors and actuators.

A Purdue research team is making progress in developing wireless implantable medical devices for treatment of a variety of conditions using wireless networks of nanoelectronic sensors and actuators. These implantable systems are being pursued for applications from monitoring and suppression of epileptic seizures to prosthesis control for persons injured in war.

A Purdue research team is making progress in developing wireless implantable medical devices for treatment of a variety of conditions using wireless networks of nanoelectronic sensors and actuators. These implantable systems are being pursued for applications including monitoring and suppression of epileptic seizures; prosthesis control for persons injured in war; modulation of cardiac arrhythmias; treatment of depression and gastroparesis, a partial paralysis of the stomach; and monitoring of intraocular pressure and therapeutic intervention for glaucoma.

The team is developing a system, for example, to monitor the respiratory and cardiac rate of epileptic patients. “It’s a wireless implantable sensor for tracking physiological signals. It allows us to track respiratory or cardiac death as a consequence of epilepsy,” says Pedro P. Irazoqui, director of Purdue’s Center for Implantable Devices, associate professor in the Weldon School of Biomedical Engineering and associate professor in the School of Electrical and Computer Engineering.

Such a system could be developed for a condition called SUDEP, for sudden unexplained death from epilepsy. “This is a subset of epilepsy where the seizures kill the patient,” he says. “We are trying to learn the mechanism by which these patients die and how to prevent that.” SUDEP accounts for about 15 percent of deaths of people with epilepsy and is likely caused by failures of the cardiac or respiratory systems or a combination of the two.

The implantable devices have embedded radio transmitters that allow them to communicate. “So you could have multiple devices, one in the head to track your brain and one in the chest to track your heart and breathing, and they can talk to each other and to the outside world,” Irazoqui says.

Information about the research was detailed in a poster paper during a meeting of the American Epilepsy Society in December. The system has two tracks: in the brain to monitor changes in neural activity and track seizure onset, and in the chest to track respiratory and cardiac changes and potentially to stimulate the vagus nerve to override those changes.

“Think of it potentially as a pacemaker for seizures,” Irazoqui says. “The goal is not to stop the seizures with this device but to keep the patient alive.”

The research group is one of the initial eight preeminent teams formed as part of the College of Engineering’s strategic growth plan that will add as many as 107 faculty over five years. Irazoqui is working with team members Mark Lundstrom, the Don and Carol Scifres Distinguished Professor of Electrical and Computer Engineering; William Chappell and Muhammad Ashraful Alam, both professors of electrical and computer engineering; and Zhihong Chen, associate professor of electrical and computer engineering. The research is in partnership with the National Science Foundation NEEDS (Nano-Engineered Electronic Device Simulation) initiative led by Lundstrom; the Goodman Campbell Brain and Spine neurosurgical practice; and the Indiana University School of Medicine.

“I feel very optimistic about having a working prototype this spring,” Irazoqui said.

Researchers led by Fisher have created a new type of biosensor that can detect minute concentrations of glucose in saliva, tears and urine and might be manufactured at low cost because it does not require many processing steps to produce.

“We want to make sensors that meet the functional requirements for in-vivo use, which is different than — and in many ways more challenging than — for external uses,” Fisher says. “By going in-vivo you change the allowed materials and that changes the sensor response. Most of the time the question is not, ‘can you make a sensor with record-setting sensitivity?’ It’s, ‘can you get a signal that’s good enough with a device that’s going to last long enough?’ Then, how do you reset your sensor so that it continues to work inside the body? We could invent the greatest sensor with the highest sensitivity but if it uses a material that’s incompatible for implanting or if it only can be used once or twice or a few times and can’t really be reset, then it’s no good.”

Another challenge is to create devices that entail relatively low cost and are scalable for nanomanufacturing. “We are working on that as well,” Fisher says.

Rickus has developed optical probes that make it possible to record biomarkers in the body in real time to monitor factors such as neurotransmitter levels or glucose levels. Such an approach could be harnessed to track the body’s inflammation response.

“Inflammation response is linked to depression, anxiety, and post-traumatic stress disorder,” Irazoqui says. “We believe we can take the same implantable wireless platform and modulate the levels of inflammatory cytokine to drive down depression. We have done this in animals, and using Jenna’s probes we can provide a real-time feedback mechanism of our device to show that it is working.”

Genetically engineered proteins are providing new tools for such systems.

“We make materials that interact with cells and tissues and organisms to either sense or actuate,” Rickus says. “We are moving more and more towards optical as the fabrication and miniaturization of optical devices have advanced in the last decade. The optical materials have a lot of advantages in terms of long-term recording in living organisms. There has been a big advance of genetically encoded protein sensors. People are engineering new proteins to be sensitive to different molecules and have light-responsive fluorescence or other properties.”

Her group is working to embed the engineered proteins into porous solid-state structures in order to integrate them into devices.

“So it allows us to make an optically active solid-state material that is sensitive to particular biomolecules,” Rickus says. “We can control the geometry and shape of these materials to then integrate them into optical devices — light sources and detectors — that can be miniaturized and made into complete sensor devices.”

“Most devices in neural prosthesis are open loop, meaning they stimulate periodically but they don’t stimulate in response to something,” Irazoqui says. “They just stimulate every so often, like a pacemaker. You can close the loop in the sense that you only stimulate in response to an event. So, if a person has epilepsy you can stimulate when a person is having a seizure or is about to have a seizure but you wouldn’t stimulate otherwise. And that way you stimulate less, you have less of a dose and you have fewer side effects. You can also have a second kind of closed loop, where you stimulate, record how the body responds to your stimulus, and then rather than stimulating with a constant dose, stimulate to invoke a constant response. You stimulate to get the body to do X, which gives you an optimal therapeutic benefit.”

The team is conducting research into both types of closed-loop systems.

“In the first type of closed-loop system, we stimulate in a way that we get the minimum amount of stimulus necessary to give the right therapeutic response," he says. "And in the second type we stimulate only when we need to be stimulating.”

Such systems hold promise for the treatment of many conditions including epilepsy, anxiety and Parkinson’s disease. The work also is progressing as a potential therapy for gastroparesis. For example, stimulating the vagus nerve could facilitate passage of food from the stomach to the small intestine.

"If we have an implantable device that is designed to alleviate symptoms or disease state and we have biomarkers of that disease state, we can actually watch and monitor whether our treatment is working and we have more control systems," Rickus says. “We used to be limited to the proteins found in nature and have been using them to create biosensors since the late ’50s, but now genetic engineering of proteins is giving us a whole new set of tools.”

Improving the stability and durability of proteins so that they continue functioning over many years in devices is one of the challenges facing the researchers.

“There are proteins that live your entire life span, so it’s theoretically possible to stabilize them, and the way we embed them in these solid-state materials does significantly improve their durability and their longevity,” she says.

Another challenge in creating the implantable systems is to develop specialized design models that integrate sensors, actuators and microprocessors. Since the 1960s, the semiconductor industry has been developing advanced computational models and simulations, which have become critical for the design of electronic devices and have enabled industry to develop new technologies and products.

“But sensors and actuators have been sort of a stepchild, a niche market,” Alam of ECE says. “There are models for sensors, but it is just not part of the ecosystem of electronic design. And if you could bring it into the same fold, then the design would be much easier, and then embedding of electronics with sensing and actuation would be easier.”

Alam and Lundstrom are working to develop such compact models for sensors and actuators. “In order to design the system, what you need to do in the model is encapsulate the essence of it. The model can be described by only a few hundred lines of code, but that compact description must capture the essence and complexity of the sensor.” The work builds on previous modeling research led by Alam and Lundstrom to create models for predicting the performance and reliability of state-of-the-art designs for silicon transistors.

The group has hired senior research scientist Quan Yuan, an expert in micro-electro-mechanical systems (MEMS) manufacturing. “We wanted to hire a full-time staff member in MEMS manufacturing, somebody who could live in the cleanroom and complement the faculty who are more theoretical,” Irazoqui says.

Two other researchers have recently arrived: industrial engineering assistant professor Ramses Martinez, and Hyowon (Hugh) Lee, assistant professor of biomedical engineering. Martinez specializes in packaging, polymers, soft robotics and flexible electronics. Lee brings expertise in MEMS, particularly magnetically actuated MEMS, which are controlled with magnetic fields. Such devices might, for example, be used to operate valves that open and close to relieve pressure in the brain in the condition hydrocephalus.

The group is planning on hiring three new faculty to round out the team. “We are getting some momentum going,” Irazoqui says. “It’s exciting.” 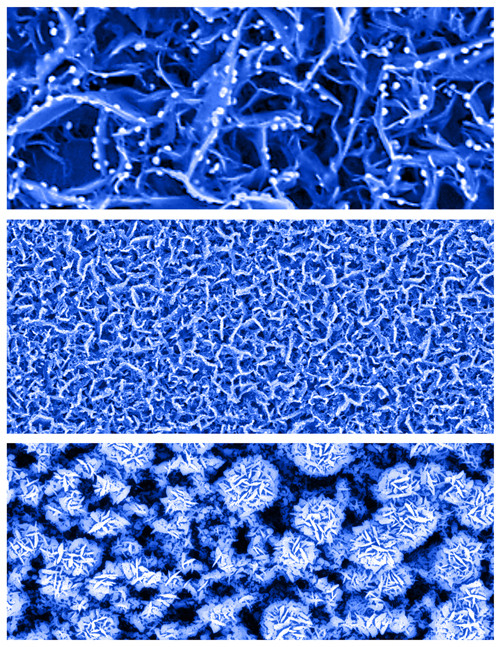 These color-enhanced scanning electron microscope images show nanosheets resembling tiny rose petals. The nanosheets are key components of a new type of biosensor that can detect minute concentrations of glucose in saliva, tears and urine. The technology might eventually help to eliminate or reduce the frequency of using pinpricks for diabetes testing. (Purdue University photo/Jeff Goecker)
Read Other Stories:
College of Engineering
Purdue University
West Lafayette, IN 47907
(765) 494-4600
If you have trouble accessing this page because of a disability, please contact the Webmaster at webmaster@ecn.purdue.edu © 2023 Purdue University An equal access/equal opportunity university