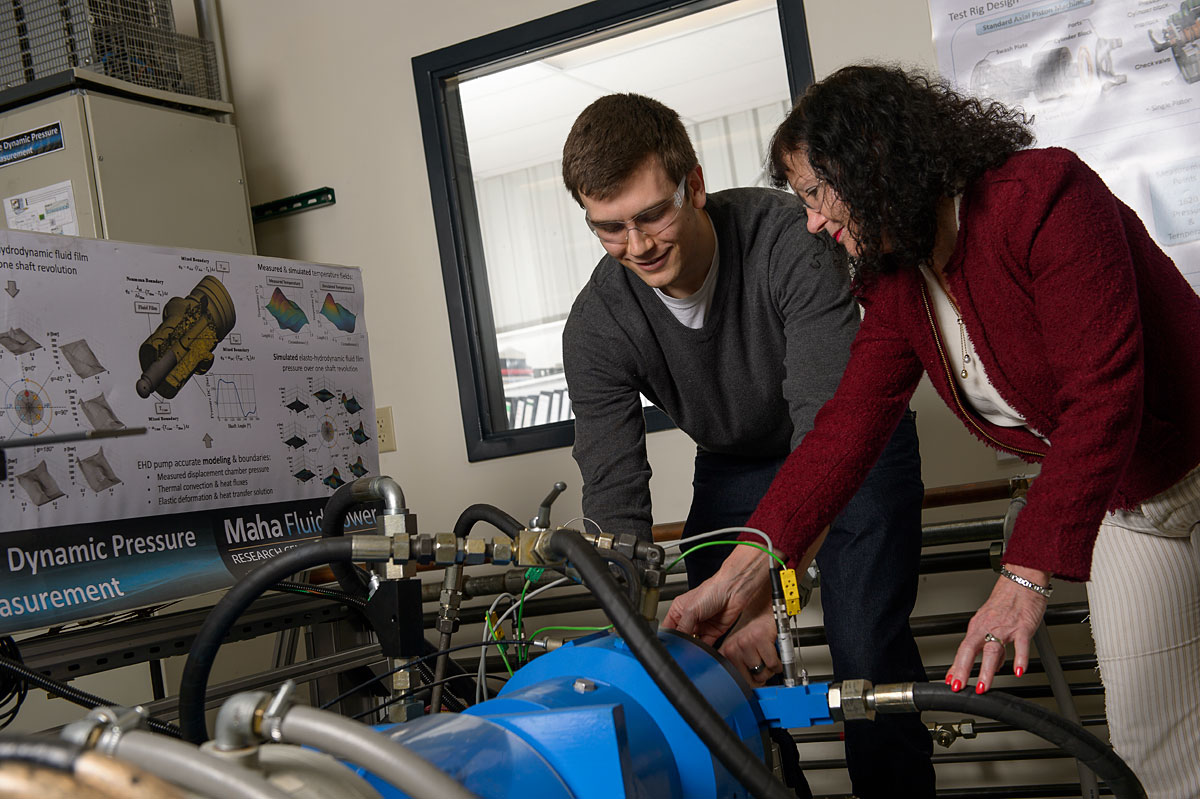 Axial piston pumps form the heart of many high-pressure hydraulic systems. They are very compact, can work at pressures above 40 MPa and can achieve high efficiency. Although most hydraulics are understood well at a systems level, the individual components, including axial piston pumps, are not completely understood.

Axial piston pumps form the heart of many high-pressure hydraulic systems. They are very compact, can work at pressures above 40 MPa and can achieve high efficiency. Although most hydraulics are understood well at a systems level, the individual components of the system, including axial piston pumps, are not completely understood and models to be used for a computational design approach are not available in practice. This makes design of new axial piston pumps particularly challenging and expensive because time-consuming prototyping is required.

Purdue graduate students at Maha Fluid Power Laboratory are developing a computational simulation model to tackle this problem.  A nearly complete model for the main parts of axial piston machines has been developed using the Fluid Structure Thermal Interaction (FSTI) code, which simulates all of the tribological interfaces inside of an axial piston machine. A special test rig measures friction between the pistons and cylinders within a rotating group of an axial piston pump, and results are compared with the output of the model. Unfortunately, the friction measurements weren’t matching completely.

Andrew Adelsperger, a sophomore in nuclear engineering who is earning a minor in mechanical engineering, undertook the challenge of finding a way to model more accurately the friction between piston and cylinder in axial piston pumps through a Summer Undergraduate Research Fellowship (SURF) mechanical engineering project titled Modeling of Mixed Friction Interactions Occurring in Axial Piston Pumps. Monika Ivantysynova, the Maha Named Professor in Fluid Power Systems, served as his advisor over the 11-week project.

“The research team knew that something was wrong with the friction model and that mixed friction might be the cause,” Adelsperger says. His task was to determine whether this was the problem, and, if so, find a way to account for the mixed friction in their computer code.

Motivation for the research

Hydraulic systems are among the most prevalent means of transmitting energy. They have high power density, are durable, and can transmit the energy anywhere that a hose can go. The systems are also very compact, saving space and weight compared with other means of energy transmission.  For these reasons they are used in myriad applications, including construction applications, where they enable excavators and cranes to lift enormous loads. Hydraulics also are used in steering and braking systems in daily transportation modes such as airplanes and cars.

According to Adelsperger, the axial piston pump is one of the most enduring and robust designs. This type of pump can achieve output pressures in excess of 450bar, and its variable displacement makes it useful in applications ranging from actuator control on excavators to hydraulic hybrid transmission technology.

The use of comprehensive computer models for virtual prototyping will allow the design of new and more efficient axial piston machines. To achieve this goal requires more investigations of some of physical phenomena that are still not completely understood. To investigate the nature of friction between piston and cylinder is one of these topics requiring further research.

Adelsperger used the data generated by the FSTI code, which was created by Matteo Pelosi, a Maha Fluid Power Laboratory PhD candidate, who finished the computer model in 2012 and showed that it accurately simulates the conditions inside a working axial piston pump. Pelosi verified the FSTI pressure and temperature fields using a test rig and telemetry system. Unfortunately, the model did not provide simulation results which would always match measured piston friction forces obtained from Maha's special tribo test rig.

To model and predict the mixed friction, the Stribeck curve — a relationship between piston velocity, fluid viscosity, contact pressure and the coefficient of friction between the piston and cylinder — was used, allowing a computational model to be developed to post-process the FSTI results and determine the mixed friction.

The SURF program was designed to enhance classroom learning, involve undergraduates in real problem solving, and spark interest for research careers in science and engineering. Students are paired with a professor and one or more graduate student mentors to work on interdisciplinary research projects with practical applications. 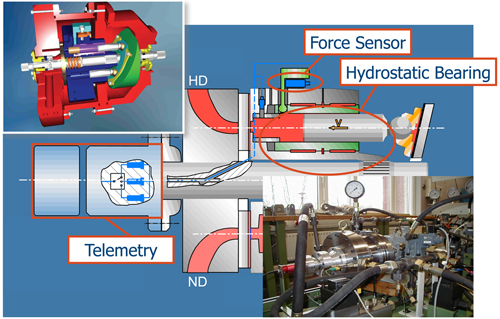 Sophomore Andrew Adelsperger undertook the challenge of finding a way to model more accurately the friction between piston and cylinder in axial piston pumps. Shown is an illustration of Maha's special tribo test rig.
Read Other Stories:
College of Engineering
Purdue University
West Lafayette, IN 47907
(765) 494-4600
If you have trouble accessing this page because of a disability, please contact the Webmaster at webmaster@ecn.purdue.edu © 2023 Purdue University An equal access/equal opportunity university