An analytics sensor for predicting bearing failure in machinery and a company developing an alternative method for removing excess material during the aluminum extrusion process were the big winners at Purdue University’s $100,000 Burton D. Morgan Business Plan Competition.

An analytics sensor for predicting bearing failure in machinery and a company developing an alternative method for removing excess material during the aluminum extrusion process were the big winners at Purdue University’s $100,000 Burton D. Morgan Business Plan Competition.

Created and led by electrical and computer engineering graduate students, Bearing Analytics won $30,000 as the best presenter in the Gold Division for graduate and undergraduate students from any discipline. The company founders, Anurag Garg and Lokesh Gupta, both doctoral students in electrical and computer engineering, are developing a sensor, with a patent pending, that monitors the performance of bearings. The sensors would alert workers to premature bearing failure by measuring changes in temperatures and vibrations.

In the Black Division for undergraduate students, ExDie Cleaning Technologies, led by MaryBeth Pavlick, Wanying Li, Daw Gen Li and Nolan Lantieri, all seniors in materials engineering, took home the $20,000 first prize. That group is developing an alternative method for cleaning aluminum extrusion dies. Applied to the dies once they are taken off the extrusion press, the process is faster, safer and more environmentally friendly than the caustic soaking methods used in industry now.

Along with in-kind legal services from Ice Miller and incubator space on campus, the winning engineers have the opportunity to enter the business world running.

Garg says the technology that he and Gupta set out to commercialize had been under development at Purdue for seven years. The Bearing Analytics team began pitching the sensor at various business plan competitions to vet the idea and get feedback for developing a business plan. Along the way they explored the process of customer development and understanding the unmet needs of the market. After raising $140,000 by the end of summer 2013, they were convinced that Bearing Analytics could become a reality.

“There was a learning curve and we’re still learning a lot,” Garg says. “We’ve been fortunate to have a great group of mentors, advisors and supporters who’ve taught us about the business world, marketing, strategy, finance and more.”

Garg says they’ve made some great progress since the competition. “We completed three different prototypes of the solution and put out alpha installations in the field,” he says. “We received and delivered on our first purchase order, so we are now revenue-positive. And we raised another $100,000 through FOUNDER.org.”

Stepping from engineer to entrepreneur has been a rewarding journey for Garg. And the experience gained through other business pitch plans, including the 2013 Burton Morgan competition, may have helped pay off with this year’s top prize.

As for balancing the business and technical sides of his brain, Garg says it’s now all in a day’s work. “I don’t think one is more challenging than the other,” he says. “They are, however, very different hats and require us to think differently. But having a strong grasp of both certainly makes a big difference in our ability to make meaningful decisions. It’s a blessing to be able to think from and talk to both sides of the aisle.”

Now a seven-person team, Bearing Analytics is gearing up for a full-feature beta launch of the sensor solution in October.

Cleaning up in the competition

The Burton Morgan prize may have come as more of a surprise for Pavlick (BSMSE ’14), the spokeswoman for ExDie Cleaning Technologies. Her team came together as part of a senior design class in materials engineering, which tasked students with coming up with technological solutions presented by their professors and sponsoring companies.

Within the capstone course, the team was also selected to enter Burton Morgan competition. So even before arriving at a solution, they had to begin exploring a business plan. “None of us had any experience as an entrepreneur,” says Pavlick of their biggest challenge. Actually, the technical teamwork helped lead to success on the business front. “Our team fit perfectly together,” Pavlick says. “We had a really good dynamic the whole year and were able to figure out quickly who had what strengths and how each of us could best contribute.”

Pavlick says they were clearly excited about reaching the finals of the competition and the technology-inspired company may have helped ExDie stand out. “The question-and-answer part of the presentation was a bit nerve-racking,” she says. “We were used to a lot of the technical questions our professors presented us, but we didn’t know what kind of business questions they would ask us.”

They’ve used the prize money and donated services to continue moving along the entrepreneurial path. Pavlick, who now works at Owens Corning in Columbus, Ohio, keeps in touch with her teammates, who also graduated in May. As they all juggle the various challenges of new careers or graduate school, they continue to work virtually on building the business. The next goal, she says, is to raise enough capital to continue the lab testing plan.

As for her emerging role as an engineering entrepreneur, Pavlick says her best advice for those looking to bring anything from technological discovery to delivery is to jump right in. “A lot overlaps in the two roles,” she says. “The business and technical sides force you to look at two perspectives. For me, the entrepreneur side is more challenging, pushing me further out of my comfort zone. But that’s part of the fun of it.” 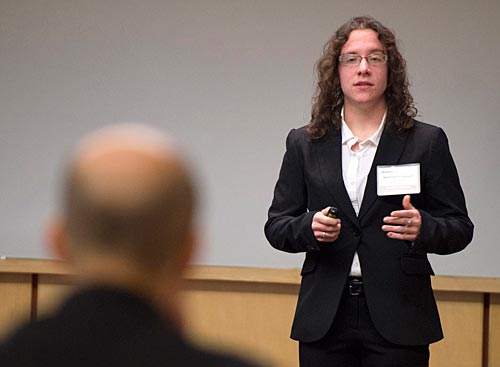