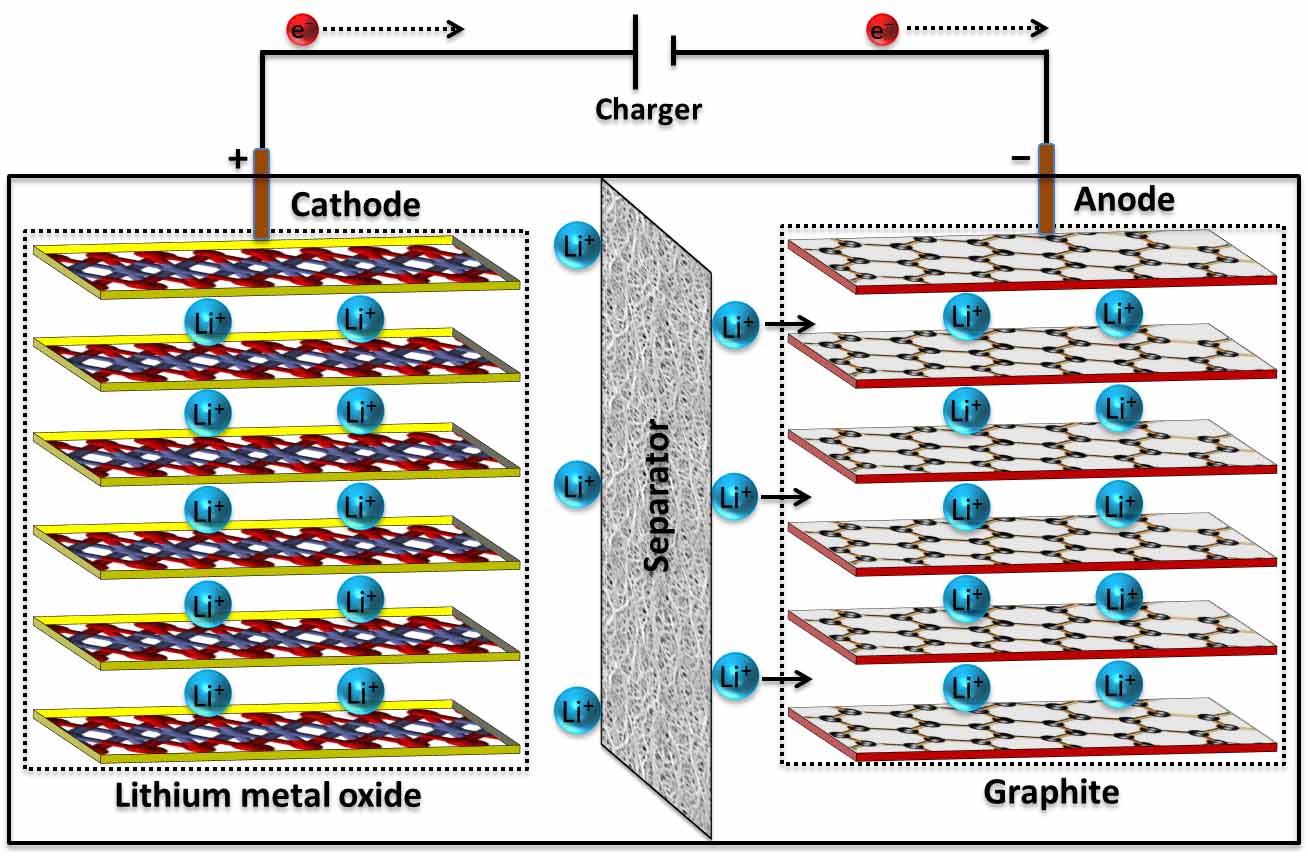 Conventional Li-ion batteries consist of a graphite anode and a Li-transition metal oxide cathode. During the charge phase, Li-ions are intercalated between individual graphene layers of the graphite to form lithium hexacarbide (LiC6). During the discharge phase, Li-ions are inserted in to the cathode. Rechargeable Li-ion batteries are common today in the area of electrochemical energy storage due to their high energy density and wide range of applications in portable electronic devices, implantable medical devices, and electric vehicles. Despite these advantages, Li-ion batteries lack the high power density (i.e., rate performance) critical for many commercial applications. One of the main challenges is obtaining excellent rate capability while maintaining long cycle life and safety. Electronic and ionic conductivities of most of the electrode materials are not sufficient enough to attain high rate performance. The use of graphite anodes with a theoretical capacity 372 mAh/g is one of the critical factors that limits the performance and safety of current generation Li-ion batteries. Another safety concern is the use of flammable organic electrolyte solutions.

The goals of this research include:

Our overall goal in researching lithium-ion batteries is to overcome the above mentioned drawbacks by fabricating nanostructured electrode materials and hybrid electrolytes.

In recent years, there has been developing interest in the secondary Lithium-Sulfur (Li-S) battery since the presence of sulfur as an active material permits the cathode to hold a greater amount of energy per mass of active material. This causes Li-S to offer a maximum theoretical capacity of 1675 mAh/g and high theoretical energy density of 2600 Wh/kg, the highest calculated values among the solid phase elements. By comparison, commercial lithium ion batteries demonstrate theoretical energy densities of 570 Wh/kg for lithium cobalt oxide systems and 180 Wh/kg for lithium manganese oxide systems. Li-S also presents various safety, availability, and financial benefits. However, the primary issue of the Li-S battery is the polysulfide shuttle effect in which the spontaneous formation of polysulfides inhibits Li-S performance. During the first discharge cycle, sulfur particles accept electrons and react with free Lithium ions in electrolyte to form lithium polysulfides that dissolve in most organic electrolytes, steal away usable lithium from the system, and is observed in electrochemical testing as a rapid capacity fading and continuous self-discharge of the cell upon storage. The most widely studied, and perhaps the single most promising approach to Li-S, is implementing a novel three-dimensional carbon-sulfur composite architecture at the cathode. This approach best improves the discharge capacity, cyclability, and Columbic efficiency by significantly reducing shuttle effect and increasing the net conductive ability. The focus of our work is to develop scalable, environment-friendly, and efficient synthesis techniques as well as porous carbon-sulfur composites to meet the practical lithium-sulfur battery. This work also includes optimization of synthesis techniques as well as compatible electrolyte systems. 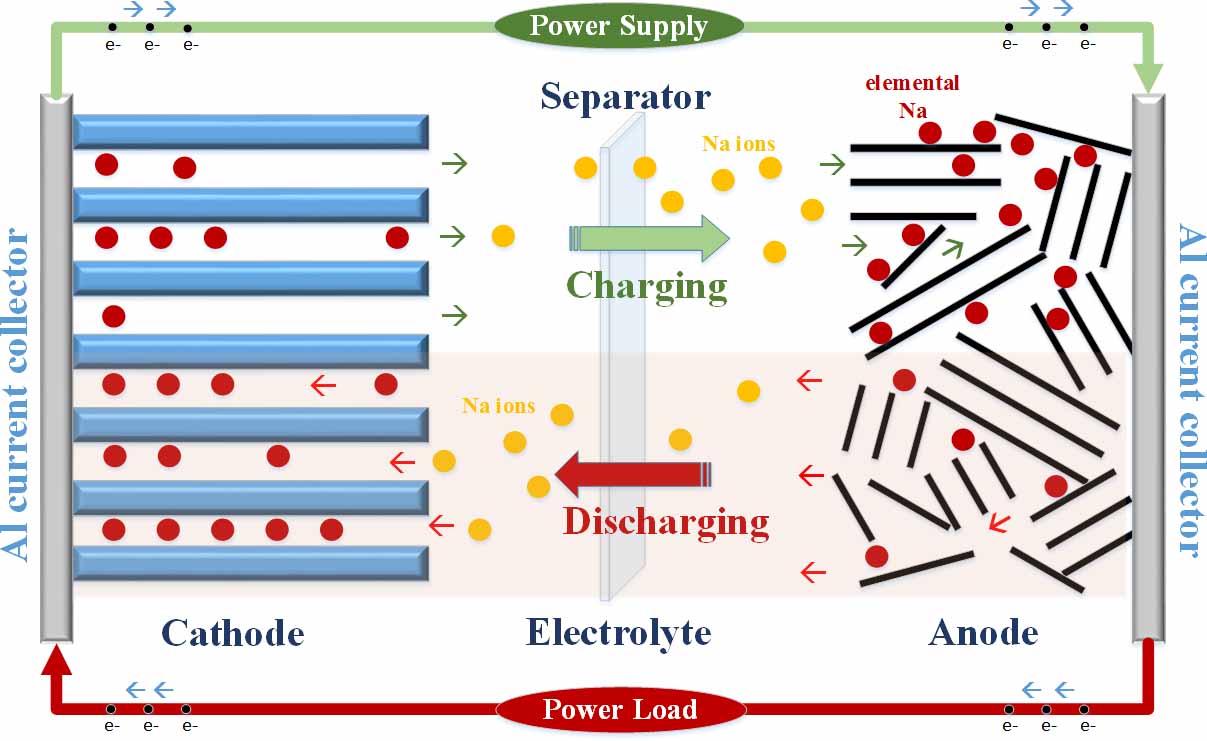 In 2040, it is estimated that the global production of energy will grow to approximately 49 trillion kilowatt-hours; an unprecedented growth to almost double its current size. This prediction sets an impressive challenge to harvest and store this massive resource both efficiently and effectively. Large-scale energy storage systems (ESS) including pumped hydroelectric storage, compressed air, fly-wheel, and electrochemical batteries are promising candidates to meet such extreme demands. Electrochemical batteries in particular are gaining its popularity due to its flexibility at load leveling, high energy conversion efficiency, and simple maintenance. Currently, the three commercially available electrochemical EES are lead acid, Sodium-Sulfur (Na-S), and Lithium-ion (Li-ion), but each system demonstrates some level of disability. Lead acid chemistry is plagued by low energy density and a short cycle life. Na-S chemistry requires excessively high operation temperatures near 300 C and is easily susceptible to corrosion. Li-ion chemistry necessitates high implementation costs and is sensitive to temperature fluctuations. Therefore, improving current ESS designs can provide superior grid functionality, lowered operating costs, reduced infrastructure investments, and greater levels of reliability.

The popularly sought solution for next generation ESS is the Sodium-ion (Na-ion) system. Na-ion chemistry is attractive for the following reasons:

Despite these practical advantages, Na-ion chemistry presents a few challenges:

These issues can be attributed to the large size of the sodium cation, whose radius is 0.26 Å larger than that of lithium cation with radius of 0.76 Å. This is equivalent to a 140% greater volume in cation size.

Our purpose in pursuing the Na-ion battery is to develop effective, high-performance electrode materials that are characterized by durability; high safety; and simple, economical synthesis processes. Further development of Na-ion anode materials include composite materials with metal oxides and alloys; hard carbons; and micro and nano-composites with unique morphologies.

Due to the high cost and scarcity of lithium, exploration of alternative metal-ion battery systems for cheaper energy storage is becoming increasingly important. Potassium ions have recently been shown to reversibly intercalate in graphite, the standard anode for lithium-ion batteries, despite the inability of sodium ions to do so. A high theoretical capacity of 279 mAh/g and the voltage plateau at 0.2 V is promising, but the bulky potassium ions limit high current performance. Our laboratory is interested in exploring novel electrode materials and nanostructures for K-ion batteries. In particular, we are experimenting with carbon architectures such as graphene, nanotubes, nanofibers, and amorphous biomass-derived carbon that can accommodate the large volume change (50%) of potassium insertion. In addition, reduced diffusional distances and increased electrolyte contact enables superior rate performance and cyclability over the standard graphite material. Besides carbonaceous materials, we are exploring novel 2D structures, such as Mxenes and MoS2, for electrochemical performance and mechanistic understanding in the K-ion system. We are also researching the safety of K-ion batteries, in terms of exothermic reactions and thermal runaway. The unknown nature of the solid electrolyte interphase formation in the K-ion system and its role in battery safety is being explored, as well as electrolyte composition. 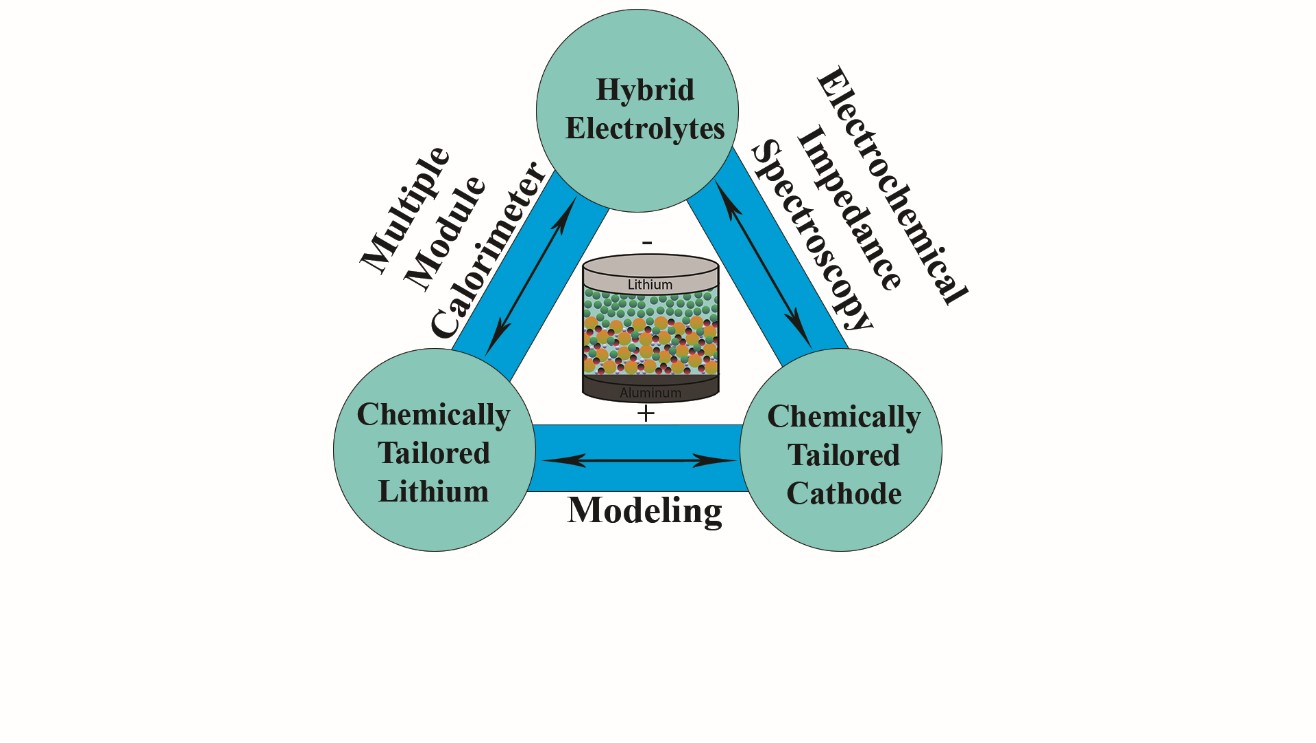 Solid State batteries (SSBs) are considered to be a key solution for next generation energy storage technologies. Replacing flammable liquid electrolyte with solid state ionic conductors also makes it amenable for achieving enhanced energy density by pairing with a Li metal anode. However, significantly high impedance across the solid-solid interfaces, due to poor contact between the electrode and electrolyte particles, leads to poor performance at room temperature and high charge-discharge rates. This warrants a tailored interface amenable to favorable charge transport mechanisms toward enabling high energy density SSBs. Hence the focus of our ViPER group is to minimize the interfacial impedance in SSBs to enhance performance.

Garnet based Li-ion conductors will be chosen as a baseline model system because of its high lithium ionic conductivity (~10-4 - 10-3 S/cm), thermal, and electrochemical stability with Li metal anode and high voltage cathodes. Tantalum doped LLZO (Li6.4La3Zr1.4Ta0.6O12) has highest Li-ion conductivity ~10-3 S/cm at room temperature among other LLZO systems. Developing a hybrid electrolyte of Ta-doped LLZO with Li-ion conducting polymers is considered to be a new strategy to improve the interfacial contacts. The synergistic effect of high ionic conductivity of LLZO and flexibility of polymers makes the hybrid electrolytes a promising strategy to improve the performance of SSBs. ViPER group focusses on developing SSBs consisting of chemically tailored Li metal anode with minimum interfacial resistance, and Li-intercalation cathode (Li-NMC) with enhanced adhesion properties with garnet, that can deliver energy density >350 Wh kg-1 with 80% capacity retention after 1000 charge discharge cycles at C/3 rate. 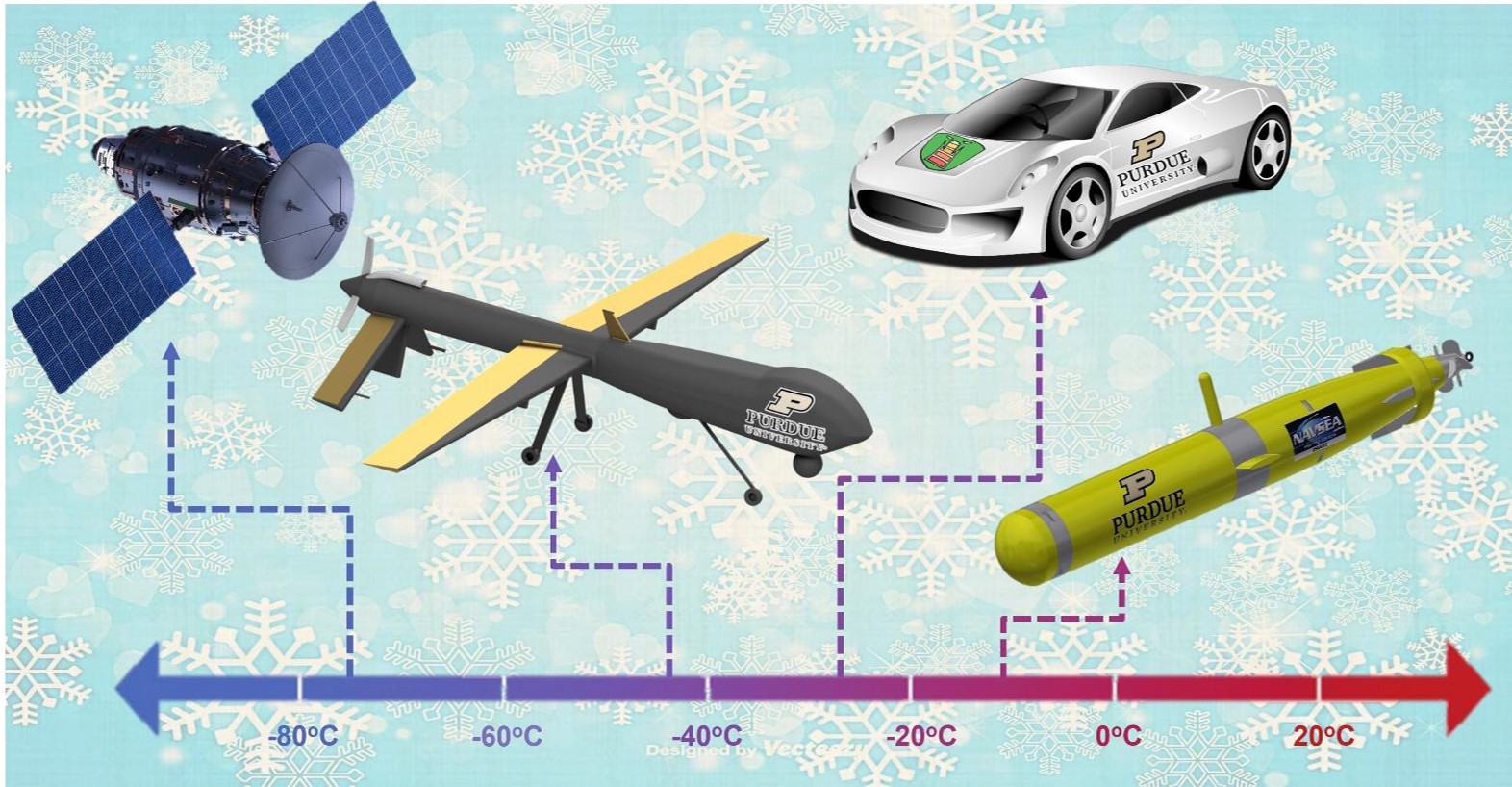 One of the most critical and unresolved issues in the Li-ion battery (LIB) field is the limited temperature operation range that they can effectively operate at. This limitation causes a serious problem for modern day applications as there are an increasing demand for batteries that can operate below -40°C in space applications, autonomous underwater vehicles (AUVs), subsurface exploration for oil/gas, high altitude drones, electric vehicles, and portable devices. An example of this can be found in Panasonic cylindrical 18650 cells that yield 100 Wh/L energy density at 25°C, while at -40°C yields only 5 Wh/L.

To overcome this limitation there are four major problems that are faced when trying to allow LIBs to operate at extreme temperatrues!

Of the four current problems three can be directly associated with the electrolyte, 2-4, with the last problem being the rate limiting step at subzero temperatures. During a typical charge/discharge process, the charge transfer resistance at the cathode or anode interphase has been shown to be the most effected with subsequent decreases in temperature, effectively limiting the overall capacity and charging rate of the battery.

ViPER laboratory focuses on extremely low temperature LIB development via formulation of advanced electrolytes to lower the charge-transfer resistance, through tailoring the solvation structure, while implimenting other strategies like surface modification of the electrodes and seperators.