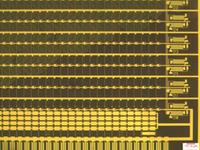 Purdue University researchers are developing tools to help industry efficiently recycle millions of flat-screen monitors and television sets expected to become obsolete soon. The monitors contain hazardous - as well as valuable - materials. In this picture, the lines and dots in a drive circuit contain indium, which sells for about $600 per kilogram. 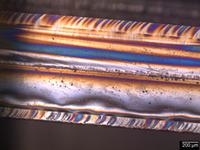 Liquid crystal displays manufactured before 2009 use cold cathode fluorescent lamps, or CCFLs, to backlight the display. The CCFL displays contain mercury, making them hazardous to dispose of or incinerate.

"Over the next few years, it is expected that hundreds of millions of CCFL-backlighted LCDs will retire each year," said Fu Zhao, an assistant professor in the School of Mechanical Engineering and Division of Environmental and Ecological Engineering. "Without proper treatment, these used LCDs could lead to serious damage to the environment."

Purdue researchers are working to aid industry in recycling the displays through a new project funded by the U.S. Environmental Protection Agency's People, Prosperity and the Planet - or P3 - program.

He is leading the project with Carol Handwerker, Reinhardt Schuhmann Jr. Professor of Materials Engineering.

Electronic products contain hazardous chemicals such as heavy metals and brominated flame retardants. The materials can leach out of landfills into groundwater and streams or be converted into "super toxicants" including dioxin while being incinerated.

More than 3 million tons of e-waste were generated in 2007 in the United States, with 13.6 percent collected for recycling and 86.4 percent going to landfills and incinerators. Environmental concerns have led 25 states to pass laws mandating e-waste recycling.

"Because many states have laws prohibiting disposal of electronic wastes in landfills, used LCDs are likely to be incinerated in large-scale capital-intensive facilities or shipped to developing countries," Zhao said. "Neither scenario is good from a sustainability perspective. Incineration is expensive, and materials and energy are wasted. Exporting e-wastes to developing countries damages local environments, harms people's health and is against environmental justice."

LCD hardware typically has a lifespan of 10 to 20 years.

"However, due to rapid technology advances, LCD monitors and TVs are becoming obsolete much faster," Zhao said. "The life cycle for products is speeding up, in part because people want the latest products."

Surveys of e-waste collectors and recyclers indicate that LCD monitors and TVs manufactured four to five years ago have started showing up in waste streams. The high cost of e-waste recycling in the United States and Europe has posed challenges in managing the high-tech trash, but new tools to efficiently disassemble LCD panels could make recycling profitable, he said.

The new equipment and tools will be tested by e-waste recyclers, and field data will be collected. The tools will be used to more easily remove a monitor's housing and detach circuit boards and metal frames, then separate polarizing filters, glass, liquid crystals, and the mercury-containing backlight unit.

"A unique feature is that these new tools allow quick access, separation, and recovery of high value parts and toxic sub-assemblies," Zhao said.

An LCD monitor includes the front frame, back cover, metal frame, circuit boards, the liquid crystal subassembly with a driver circuit and the backlight unit. Electrode patterns are made of a layer of indium tin oxide, or ITO. The backlight unit includes a frame, fluorescent tubes, a prism, a "diffuser," a reflector, and a protective layer. The liquid crystal subassembly's drive circuit has a gold coating.

"The gold price is currently higher than $50 per gram, and the drive circuit may contain 1-2 grams of gold," Zhao said.

"Although screw drivers can be used to remove the front frame, this is not preferred due to potential risks of breaking the backlight unit, which results in mercury release," Zhao said. "To minimize the probability of breaking the tubes, a case-opening tool will first be developed."

A different tool will be developed to remove the back cover from the metal frame.

"Although the LED monitors don't contain mercury, they are still e-waste and will need to be recycled," Zhao said. "At the same time, the LED-backlighted monitors contain valuable materials that will be cost-effective to recover."