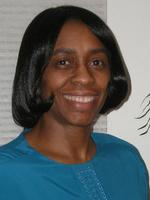 Sandra Burton
Boeing engineer and Purdue alumna Sandra Burton recently received a community service award at the Women of Color STEM Conference for her role as a leader in bringing technology and educational programming to underserved communities.

Burton, who has worked at Boeing for eight years and currently is a systems engineering operations analyst for Boeing Defense, Space & Security in Berkeley, Mo., received the award in part for her role as chairwoman of a computer initiative that introduces the benefits of technology to African-American communities in rural areas. In 2001, she founded the Immanuel Community Center near St. Louis, which actively works with K-12 students to improve their basic academic skills and STEM preparedness, and helps parents become more financially literate and provide other life skills.

“My motivation for starting this non-profit was driven by the passion I experienced as a co-ed, seeing promising African-American engineering students fall by the wayside because they were ill-equipped,” Burton said. “This had a profound negative impact on their lives – financially and otherwise. Engineers solve problems, and this was my way of making a difference and providing them with the sea-change they deserve for their future.”

Burton earned a master's of science in mechanical engineering at Purdue.