Purdue PhD student Haryl Ngoh is working on detached eddy simulations (DES) of a Mach 3 flow over a 12.7 mm leading edge diameter blunt fin in the presence of 3.3 mm thick incoming turbulent boundary layer. The flow conditions were chosen to match experiments performed in the 1980s by Dolling and Bogdonoff in the Princeton University 8 in x 8 in Mach 3, high Reynolds number wind tunnel. In the movie below, grayscale contours show the density field in the centerplane of the interaction; the orange contours display the skin friction magnitude on the tunnel floor and the fin surface.

In this simulation, synthetic turbulence, generated through a digital filtering technique, is injected at the inflow boundary. Its effect can be seen as the dark bulges moving from left to right within the centerline boundary layer flow. This turbulence interacts with the separation region and lambda shock system near the root of the fin. In ongoing work, we are comparing cases with and without this incoming synthetic turbulence to assess its effect on the unsteady separation dynamics.

Computational resources for this work were provided by Purdue University’s Rosen Center for Advanced Computing, and the calculations were carried out using the open-source CFD code SU2 on the Brown Community Cluster.

A new area under development for my research team is the battle flow model, an approach that aims to replace the wargame pieces of discrete agent models with a continuous, probabilistic mathematical approach. My collaborators in this project are Dr. Sorin Matei and Dr. Robert Kirchubel, under the Purdue FORCES Initiative. As a first application to explore the new model, we are studying the 1863 Battle of Gettysburg in the US Civil War.

See the animation below of the simulated battle, and look here for some more details. Disclaimer: this simulation represents a test case for our mathematical model development; it is not necessarily historically accurate.

This is a book about the qualitative aspects of aerodynamics. It's a guide to really understanding the concepts, targeted at the level of someone who has completed an introductory graduate level class, or an undergraduate class and some on-the-job experience. It would be excellent preparation for PhD oral exams.

McLean's text covers all the usual aerodynamics topics, with an emphasis on correcting common misconceptions. Many of these fallacies have been promoted by otherwise sound textbooks as the authors grasp for ways to recast complex mathematics in simple words.

Notable are his discussion of cause and effect between the pressure field and the velocity field, the pitfalls of thinking of vortices as inducing velocities, explanations of lift, and the dependence of induced drag on span vs. aspect ratio. Section 9.2.4 is an excellent catalog of fallacies.

This is a slow read because you'll have to keep pausing to think about what he says. As a preview, see the video of a seminar by McLean has posted by University of Michigan Engineering.

Several members of the Purdue FORCES team made a brief visit this week to Gettysburg, Pennsylvania in support of our project to simulate the Battle of Gettysburg. After studying maps and accounts of the events, walking over the historical battlefield gives a concrete sense of the varied terrain and many obstacles that influenced the famous battle of July 3, 1863.

Many thanks to my graduate students and to Aero Assist for nominating me as the Outstanding Faculty Mentor for the School of Aeronautics and Astronautics.

Nobel Prize winner Philip W. Anderson, an Indiana native who died in 2020, wrote an essay in the early 1970s on the limits of reductionism. He considered the traditional ordering of fields by scale and complexity, for example: particle physics, chemistry, molecular biology, condensed matter physics, organism biology, and behavioral science. "[W]ith increasing complication at each stage, we go up the hierarchy of the sciences." He tells us that we can still hold our heads high if our research focuses on complex systems rather than fundamental laws. "The ability to reduce everything to simple fundamental laws does not imply the ability to start from those laws and reconstruct the universe." "[A]t each level of complexity entirely new properties appear, and the understanding of the new behaviors requires research that is as fundamental in its nature as any other."

Engineers and technologists use, and sometimes generate, basic research at all these scales. In my own work, I have encountered the relaxation of excited states of molecules, electrical discharges in turbulent flow, seasonal behavior of insects (squashed bugs can cause transition), pilot behavior, and the group dynamics of the battlefield. 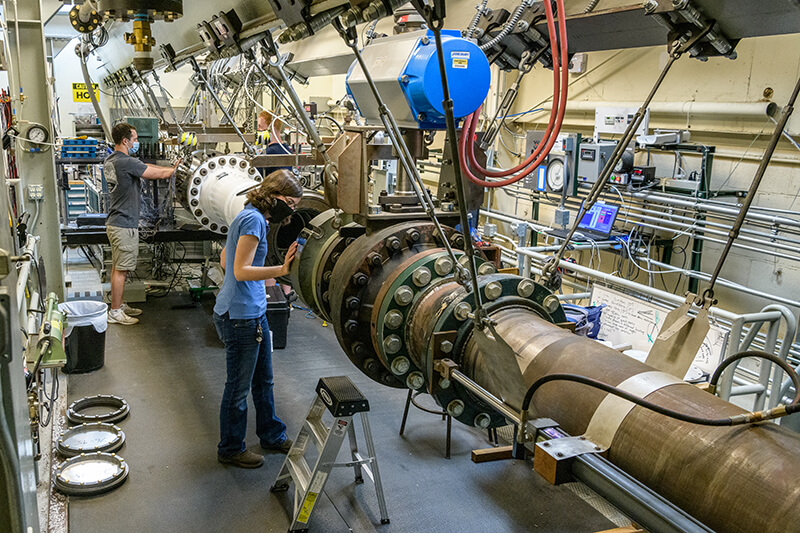 Purdue University has put out a very nice press release on our new project with Notre Dame and the Air Force Research Laboratory, the Multidisciplinary Hypersonics Program.

In the context of the Purdue FORCES(4S) Initiative, we have a postdoctoral research opportunity, entitled "Crisis Advisor: Predictive and Analytical Computational Tools for Leadership in Military Combat and Civilian Catastrophes," out under the Lillian Gilbreth Postdoctoral Fellowships Program. An ideal candidate would be a recent PhD with excellent programming skills, and experience in numerical solution of partial differential equations, systems engineering, and computer graphics. See the topic description for detailed information.

Welcome back to Purdue, and good luck with the semester! We'll make the best of the current situation.

At the end of the Second World War, the powers occupying a defeated Germany (France, UK, USA, and USSR) sought to uncover and exploit German technology as war reparations. Teams from governments and private industry scoured the shattered remains of German industry for documents, equipment, people, and expertise that could be exploited for economic advantage. Some these efforts were highly successful, as in the famous contributions of German experts to the aerospace industry. As a whole, however, O'Reagan argues that the outcome of these efforts was not very favorable.

He gives several explanations for the disappointing outcome. Sifting through large quantities of German-language documents looking for technological secrets was an enormous effort. Even copying them and shipping them home, in a pre-digital age, was quite an undertaking. Furthermore, much industrial expertise is never written down. It exists in the form of tacit knowledge or know-how. Only someone embedded in an operational local factory would pick up this knowledge easily.

German technology was also a product of its cultural and economic context. Innovations were not necessarily useful when transported abroad. In wartime Germany, for example, much technology development focused on overcoming local difficulties and shortages, such as exploiting coal instead of petroleum in the chemical industry. In the same vein, the success of a German scientist or technologist depended in part on personal connections. Transported abroad, that expert would not be nearly as productive until integrated into a new social network within the host country.

Over the longer term, attitudes changed from exploitation to partnership. O'Reagan documents very productive relationships between German industry and foreign partners in later years. In particular, German and American industry exchanged teams of experts in the post-war era, and set up mutually beneficial licensing agreements for intellectual property. With time, technology was considered less of a zero-sum game, and exchange of information helped fuel the post-war economic boom. O'Reagan argues, in the end, that the diplomatic benefit of information sharing programs, like Atoms for Peace, was significant in the Cold War era.