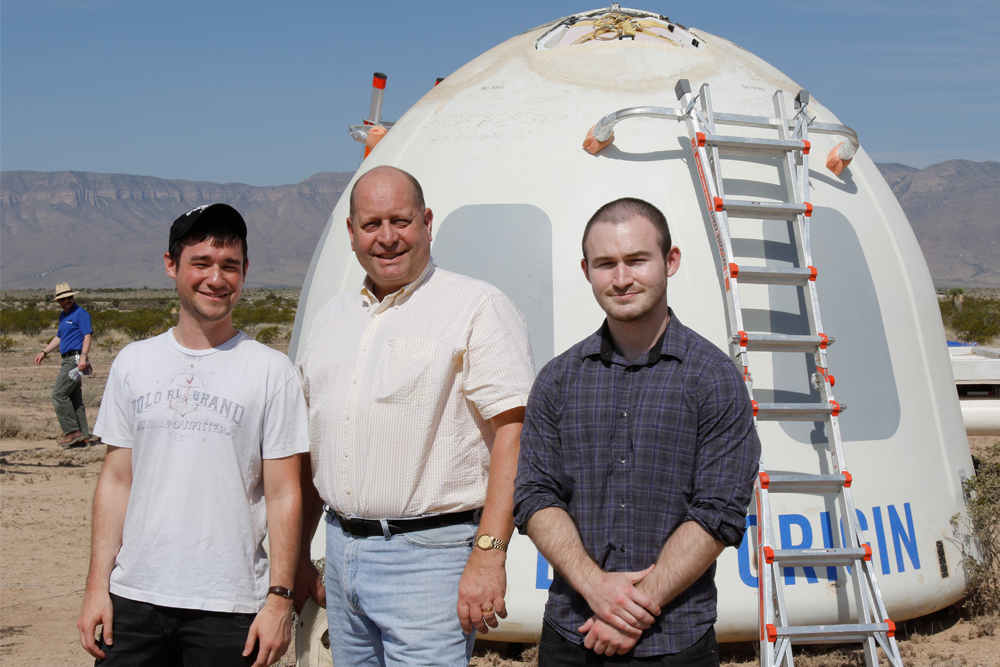 Success at zero gravity aboard Blue Origin rocket A Purdue experiment flies on a suborbital rocket test flight by a private company.

On a Sunday in June, a rocket launched from a private location in Texas, carrying a fluid physics experiment from Steven Collicott, professor of aeronautics and astronautics. Successful in producing the weightlessness, or zero-gravity, for the Purdue experiment testing control and motion of liquid in spaceflight, the launch also made history as the fourth successive suborbital flight by the same rocket and capsule from Blue Origin.

Professor Collicott, along with Brian O'Neill (BSAAE '16) and Georgios Georgalis (MSAAE '16) — former students who both earned their degrees just weeks before — conducted the preflight work for the experiment and witnessed the launch. The collected results of the experiment are expected to lead to more fuel-efficient systems in rockets that are distinguished by lower "dry mass," or lighter weight, and offer superior performance.

Aboard the rocket, a hollow sphere inside a bolted-down box was illuminated by diode panels. Mirrors and cameras helped to record views of liquid wicking along plastic vanes near the sphere wall, and the resulting data are allowing researchers to determine two things. First, they'll be able to determine the gap between the vane and the sphere wall that keeps the liquid in place. Second, they will learn just how small a gap causes the liquid to wick along the vanes.

Collicott, for more than two decades now at Purdue, has worked in the area of low-gravity fluid dynamics. Essentially he's been investigating the physics of a container filled with a liquid and gas mixture in weightlessness. Even more than a half-century into the Space Age, Collicott says, improving our understanding of wicking in zero gravity remains important for the design of any life-support systems that involve liquid and gas mixtures and for liquid rocket propellant in a pressurized fuel tank. Though Collicott still must analyze much of the data from the flight, early observations show that one immediate impact is confirmation of some predictions of the computer model used to model capillary effects and design spaceflight systems in orbit.

In his applied research, Collicott has often worked with satellite manufacturers interested in improving propellant use. Inducted to Purdue's "Book of Great Teachers" in 2008, he has taught the Zero-Gravity Flight Experiment class for 20 years, continually grappling with the mysterious ways of wicking in zero-gravity — phenomena rarely experienced on Earth's surface.

"It's a different world in zero gravity, where a satellite fuel tank might be 10 feet tall and three feet across," Collicott says. "Wicking is the dominant force on the liquid fuel. So how do you control it or how do you know where it's going to sit? How do you move it from one place to another?"

That's the rub of zero-gravity physics, Collicott says: "You either want to keep the liquid somewhere or move it somewhere. You don't want your design to be indecisive, so to speak."

Conversations with Blue Origin to take experiments aboard a private flight started in 2009. For Collicott, working with the private company seemed like the perfect evolution. "We've enjoyed working with NASA, but it's one agency with a finite budget and their rockets are quite expensive," he says. "These new, reusable, and less expensive options open up many opportunities for a lot of different fields of science."

Alan Stern, PhD, now the principal investigator on the NASA New Horizons mission to Pluto, helped make the June launch happen. As the payloads lead at Blue Origin, Stern had run the review panel that selected Collicott's experiment as one of the three experiments for the flight. "Before flying paying customers, we wanted a few test flights." he says. "It worked out well for us and Steven got great results from his experience."

As for the future of private-company spaceflight, Stern sees no limits to these skies. "The commercial suborbital is going to come on strong in the next few years," he says. "From high-altitude ballooning with World View to suborbital research platforms like Blue Origin and Virgin Galactic, companies will be offering much more routine access to space at lower prices."

Steven Collicott and student Brian O'Neill fine-tune the electronic controller in the small black box on the payload. The large clear object is the second layer of containment for the liquid in the payload, a design that allows for mounting cameras on top. The lab is Blue Origin's "Customer Payload Facility" at the company's West Texas Launch Site, north of Van Horn, Texas.

As the logistics of the Blue Origin spaceflight took a few years to come to fruition, Collicott continued to put the critical research in front of his classes, having up to five students working on the experiment each semester in class. "It was an immersive design, build, and test experience for them," he says. "I liked to warn them that it was team-based and there were no answers in the back of the book."

For an undergrad like O'Neill, a Houston native inspired by the high-level achievements of spaceflight who chose Purdue for its reputation in aeronautics and astronautics, the class was a two-semester chance to put some of his textbook learning to the test. "I worked on a lot of projects outside of class, but this was the first class where I got to put my hands on something," O'Neill says.

As part of a team that worked through mechanical and chemical failures while dividing up responsibilities on things like coding and vibrational analysis, O'Neill learned a great deal about rocketry, as well as the computer hardware that boarded the Blue Origin. Like so many of Collicott's other former students, he hopes to land an industry job. As for the Sunday in June, helping put the experiment aboard the rocket and watching it take flight capped off his undergraduate experiences.

The use of private company rockets not only will further space research, but also could pay dividends on the ground. Collicott says his research can address microdevices in health care and the optimization of automotive fuel cells.

Beyond the research that has helped further the space program, Collicott can take pride in fueling the education and careers of students — from PhD students to undergrads in a lab and now grade schoolers, all looking to learn something from zero-gravity environments. Working now with a second-grade class from Cumberland Elementary School in West Lafayette to find out if fireflies can light up in space, Collicott and his Purdue students are building a payload to study firefly glow chemistry in weightlessness. He hopes the payload takes off sometime in 2017.