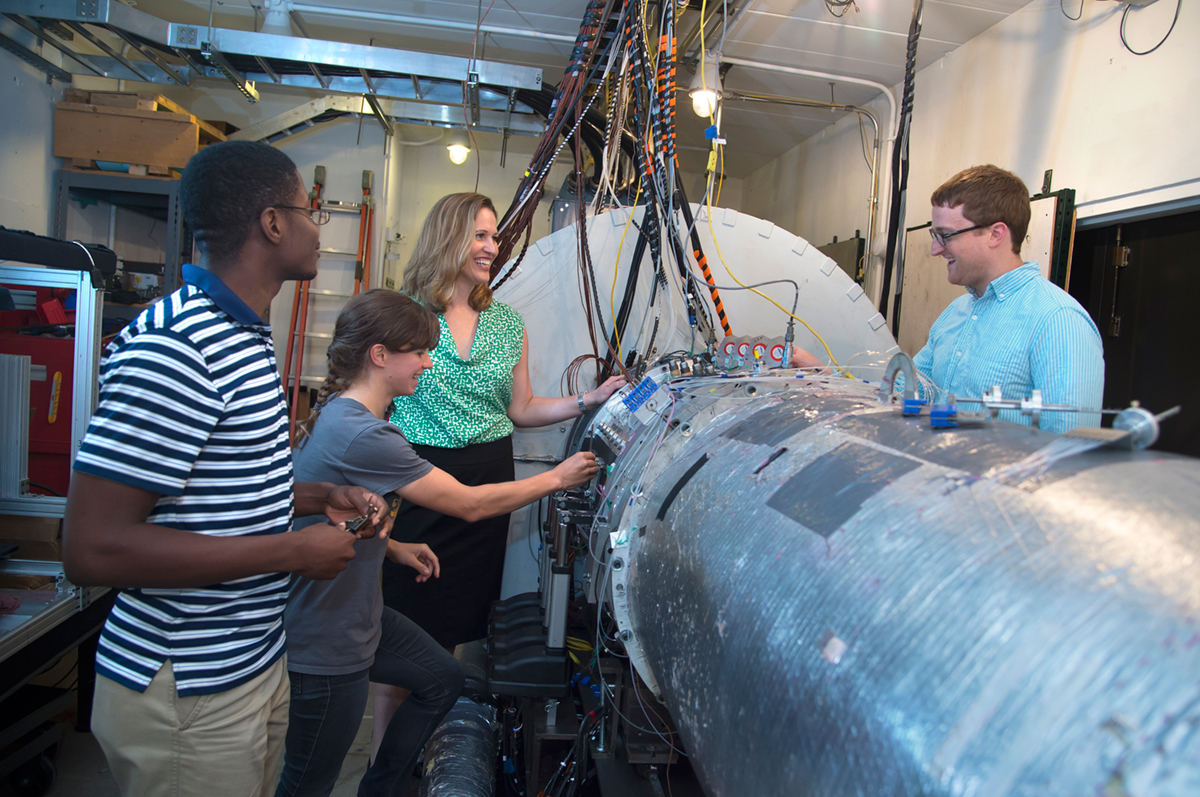 Researchers check the instrumentation on Purdue’s current three-state axial compressor before a test. (From left) Nyansafo Aye-Addo, PhD student in AAE; Natalie Smith, postdoctoral research associate who completed her master’s and PhD AAE degrees in this lab; Professor Nicole Key; and Reid Berdanier, graduate research fellow who completed an MSME and is completing a PhD in this lab. Purdue University photos/Mark Simons

Rolls-Royce is developing high-performance compressor technologies for next-generation jet engines, and much of the research to develop the enabling technology is based at Purdue’s Maurice J. Zucrow Laboratories.

Rolls-Royce is developing high-performance compressor technologies for next-generation jet engines, and much of the research to develop the enabling technology is based at Purdue’s Maurice J. Zucrow Laboratories. “This work will immediately impact the industry because the data are getting folded into design methods and future engine concepts currently being developed at Rolls-Royce,” says Nicole Key, associate professor of mechanical engineering. “We have a good team in place.”

Her group has two grants from Rolls-Royce — one each for axial and radial compressor research — totaling several million dollars. The team includes four graduate students, a postdoctoral researcher and a research scientist. Because of a tight timetable, the researchers will have the test rigs fabricated by a vendor. “It’s a really aggressive program but an amazing opportunity,” Key says. “The good thing is we’ve already been running similar kinds of rigs for Rolls-Royce, and we have an excellent capability as far as taking measurements with high accuracy and good resolution.”

An important challenge facing engine manufacturers is how to design the rear stages of a “small core” compressor. “The rear stages become physically small, and this makes the losses associated with endwall regions more significant,” Key says.

She and her group have been studying the effects of relatively large rotor tip clearances for NASA the past four years.

“Through the NASA project, we invested in hardware and instrumentation that allows us to better understand the development of these flows and how they affect the losses in the downstream stages,” Key says. “I’m excited to extend this work to a current state-of-the-art compressor design.”

The current three-stage axial compressor utilized in the laboratory has been operating for about 15 years with the majority of its funding from Rolls-Royce. The compressor is being redesigned to match Mach numbers and Reynolds numbers and blading styles consistent with next-generation engines. This is possible because of a lab renovation, where 1,400-horsepower electric motors were installed in the test cells, allowing operation of compressor research vehicles with higher pressure ratios and higher speeds.

“Purdue is one of the few places in the world where this kind of research can be performed and that is thanks to the investment the university has made in critical infrastructure,” she says.

A long history of collaboration

The compressor lab at Purdue has been working on centrifugal compressors with Rolls-Royce since 2009. More recently, researchers in the lab have been studying the effect of tip clearance size and diffuser design on the overall compressor performance.

The new centrifugal compressor facility will incorporate inlet flow features that mimic the engine transition duct between the axial stages and the centrifugal stage providing an opportunity to understand the impact of these nonuniform inlet flows on impeller performance.

“The new centrifugal compressor facility is a researcher’s dream — it is always challenging to get flow-field measurements in these machines, but a close collaboration between Purdue, Rolls-Royce, and the rig supplier ensures that instrumentation access will be excellent,” Key says.

The team utilizes standard probes to measure temperature and pressure, but fast-response transducers that can track the passing of the individual blades are also used in the lab. Additionally, plans for laser-based velocimetry measurements ensure that the team will understand the flow field without the effect of probe interference.

“This research is satisfying on many levels. We know we are impacting the future of engine design, and yet we are able to simultaneously investigate many fundamental questions associated with these complicated flow fields.”

“The test and measurement capabilities being developed by Dr. Key at Zucrow and implemented on our compressor rigs will be the cornerstone of future compressor design methods and have far-reaching impact across Rolls-Royce business units and future products,” says Nate Cooper, chief of Compressor Sub-System, AES Tech Demo at Roll-Royce.

He says the rigs at Purdue are in the process of being upgraded with the latest design methodologies and engine representative features that will ensure developed technology will transition into future products. 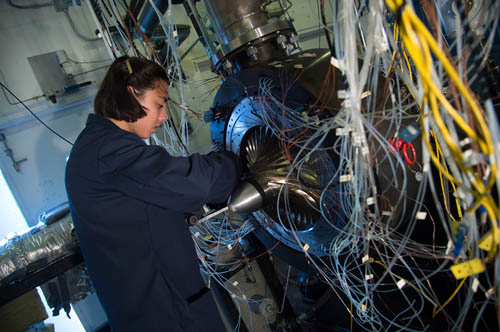 Jeanne Methel, an AAE master’s student, calibrates a tip clearance measurement probe for the current centrifugal compressor CSTAR facility.
Read Other Stories:
College of Engineering
Purdue University
West Lafayette, IN 47907
(765) 494-4600
If you have trouble accessing this page because of a disability, please contact the Webmaster at webmaster@ecn.purdue.edu © 2023 Purdue University An equal access/equal opportunity university