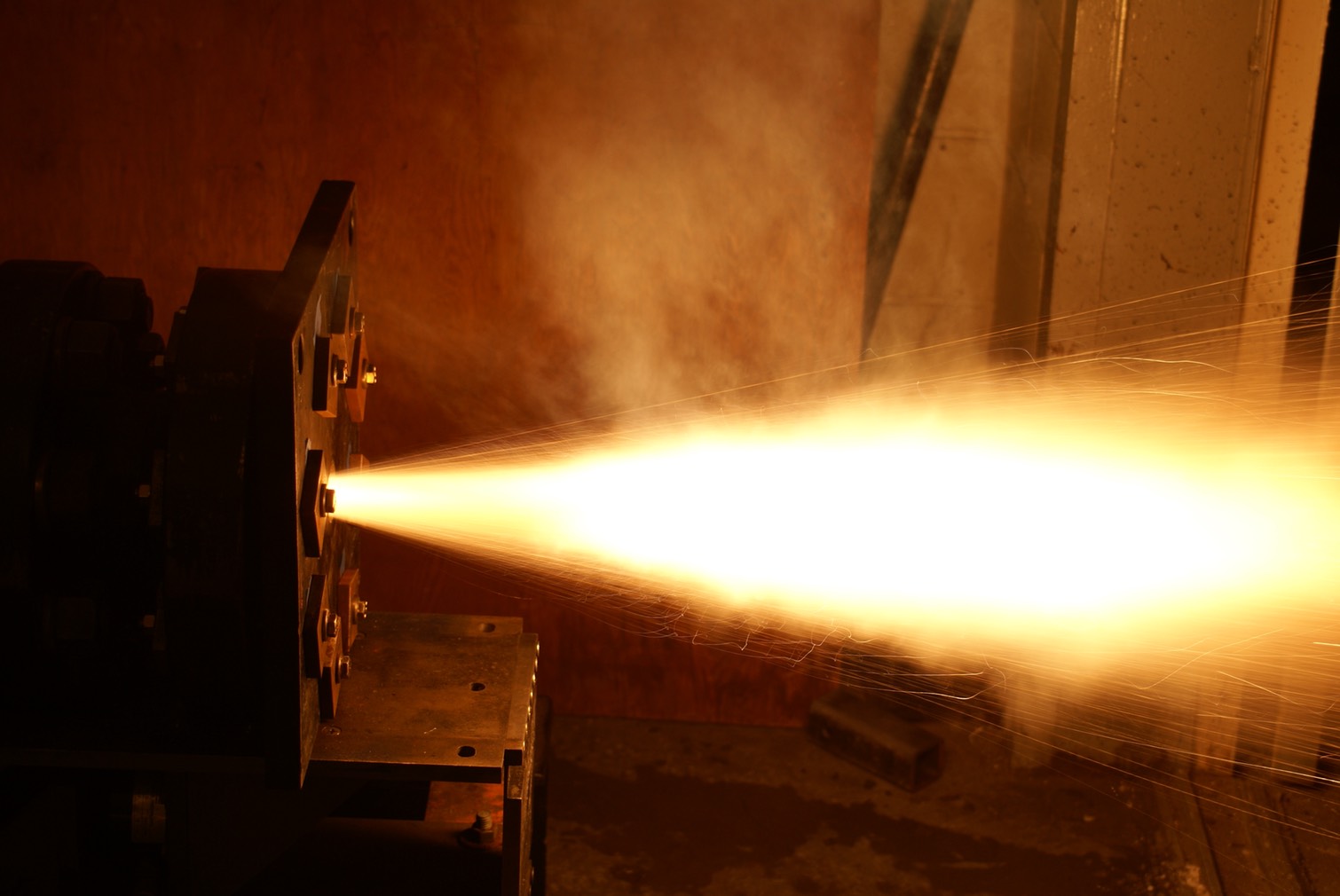 Steven Son, professor of mechanical engineering, and his team are analyzing the use of alloy powders to improve performance of propellants.

That threat drove the 2013 creation of the College of Engineering’s Preeminent Team on Energetic Materials — an interdisciplinary group of researchers who seek to advance the science and technology of explosives, propellants and pyrotechnics for defense and homeland security applications.

“The government agencies that are on the front lines trying to keep us safe have a real challenge, because developing new technology, which often demands developing new understanding, is not something that happens quickly,” explains Beaudoin, who leads the team. “So we in academia have a very important role, because we have the time and the expertise to work in a very directed manner to stay ahead of the threat.”

Jeffrey Rhoads, associate professor of mechanical engineering and another member of the team, says, “If research can be done in academia in a safe and open way, there’s a chance for the science to get furthered a lot faster than it is in the national defense labs. We can bring some formalism to the study of energetic materials, in a more traditional academic research framework.”

The team’s central mission is rethinking the detection of explosives, improving sensing and imaging systems. Related projects focus on characterizing homemade explosives and developing new forms of energetic materials. As Purdue looks to recruit more investigators in energetic materials, the team already has demonstrated significant progress in a number of challenges.

Researchers are collaborating on a project to create portable microscale vapor sensors to detect explosives.

The U.S. Department of Homeland Security’s ALERT (Awareness and Localization of Explosives-Related Threats) program supports multiple efforts to detect explosives, either in airborne vapors or directly in trace residues.

Rhoads collaborates with George Chiu, professor of mechanical engineering, and Bryan Boudouris, assistant professor of chemical engineering, on a project to create portable microscale vapor sensors. These devices employ resonant mass sensing, a well-established technique that uses thin cantilever sensors that bend like diving boards. If a substance has a chemical affinity to the surface of the sensor, it will add to the sensor’s mass and change the frequency with which it vibrates, which the system measures.

“These work really well in the lab, but as soon as you take them out in the real world, if you don’t have the right surface chemistry, then dust and other things can start sticking on the sensors and it gets a little tricky,” Rhoads says. “We’ve been trying to move the science to the engineering, to tackle the practical issues.”

The Purdue researchers use a form of inkjet printing to prepare the tiny sensors, and new analytic approaches to simplify the electronics required to interpret the data. In preliminary results, they have shown part-per-million detection of TNT in ambient air, and they hope to field an early test system in an airport late this year or in 2016.

Another major project is building better versions of swabs used to detect traces of explosives. When you go through airport security, for instance, a security employee may check your palm, fingernails, belt buckles, shoes or bag with something that looks like a selfie stick. With these swab systems, "if you miss a little bit, that’s a big deal," Boudouris says. “The swab needs to get material to stick on it, but not stick too strongly.”

He and Beaudoin are combining deep understanding of the particle dynamics of explosives with knowledge of how to engineer swab surfaces. The result is “revolutionary new materials that will be substantially more effective at interrogating surfaces, capturing residues, exposing those residues, and letting us determine whether or not a terrorist was handling that baggage,” Beaudoin says. The researchers are now working with manufacturers and the Navy to develop 1,000 prototypes for commercial testing.

Purdue’s security screening work also goes beyond chemical sensing. Although computer tomography (CT) image scanning is widely used for security operations, the resulting images often are far from optimal. Charles Bouman, professor of electrical and computer engineering, and his colleagues have pioneered analysis models that deliver images with higher resolution and less visual noise, so that both security staff and automatic threat detection software can do better jobs.

Combustion expert Steven Son, professor of mechanical engineering, partners with other team members on multiple projects. These collaborations generally involve small amounts of explosives, or materials engineered to have improved efficiency and performance. Son’s group runs many experiments in Purdue’s Maurice J. Zucrow Laboratories, the largest U.S. academic propulsion lab. The Zucrow center is away from the main campus and offers special facilities for energetic materials research (“and for making loud noises,” as Son notes).

One key thrust for the energetic materials program, Son says, is characterizing homemade explosives. The investigators put small amounts of explosive into a tube, drive a shock into the tube, and watch how the detonation wave dies in that tube. This produces a wealth of data that can be used to better predict the threat of homemade explosives.

Son also collaborates with Wayne Chen, professor of aeronautics and astronautics and professor of materials engineering, and an expert in high-rate mechanics, in work supported by the National Nuclear Security Administration looking at shock-assisted combustion synthesis.

In another project, sponsored by the Air Force Office of Scientific Research, Son and Rhoads look at ways to ultrasonically heat energetic materials. “Nobody thought that was possible,” Rhoads says, but the investigators have successfully initiated a single crystal of energetic material by vibrating it with a small transducer.

Rhoads and Son also joined up with Chiu to study innovative methods of depositing very small amounts of energetic materials, in an effort sponsored by the Defense Threat Reduction Agency. These unique materials can be put on chips for innovative applications like propelling small-scale robots or selectively destroying electrical components, Rhoads says.

In studies of solid propellants, Son’s group analyzes the use of alloy powders such as lithium-aluminum instead of aluminum, “which is interesting because lithium in the alloy will preferentially react with hydrochloric acid,” he says. The researchers now have developed a lithium-aluminum alloy-based propellant that can not only reduce emissions of hydrochloric acid compared with conventional aluminum-based propellants but significantly improve performance. This discovery fits in with a drive toward more environmentally friendly propellants, both for military and civilian rockets, Son points out. Two patent applications have been submitted.

Fundamental strengths for the future

During the early days of the insurgency after the second Iraq war, the United States struggled to address terrorist threats such as improvised explosive devices. “The fundamental science behind these materials was poorly understood; most people didn't understand what an explosive did other than explode,” Rhoads says. “Now we have people who really understand these materials and the science behind them, and we’re putting in place the next generation of engineers.”

The team has no difficulties recruiting this next generation of researchers. Graduate students are attracted by the challenges in studying these materials and by the interdisciplinary nature of the research, with chemical engineers, electrical engineers, mechanical engineers, physicists and others working side by side.

Graduates are in demand by a wide spectrum of employers: not just the national defense labs and homeland security groups, but pharmaceutical makers, microelectronics manufacturers, and even food companies. “From a fundamental perspective, the adhesion between spice and nacho chips is not all that different from what we study here,” Beaudoin remarks.

As the College of Engineering continues to recruit faculty for energetic materials research, “the people that we are pursuing to make us absolutely the premier institution in the world are attracted both by our skill set and by our unique facilities,” Beaudoin says. “Only a very small handful of places in the world can do this research. You need an environment that encourages and cultivates these kinds of collaborations, and we have it.”