Malloc: make your own sprintf

You will create a function called smintf(…) that behaves exactly the same as mintf in HW02, except that instead of printing the result to the console (stdout), your smint will store it in a string and return a pointer to the new string. The description for HW02 serves as the specification for how the format string is to be used and anything else not covered here.

The output of printf( smintf(…) ) will be exactly the same as mintf(…).

Read this carefully, even if parts of it look identical. There are a few small differences.

The following will help you get started:

You will find only one file: hw03.h. That is the header file, which defines the signature of the smintf(…) function. The header file should be included (via #include) at the top of your hw03.c and hw03test.c, just below any standard libraries.

You will create the following files: 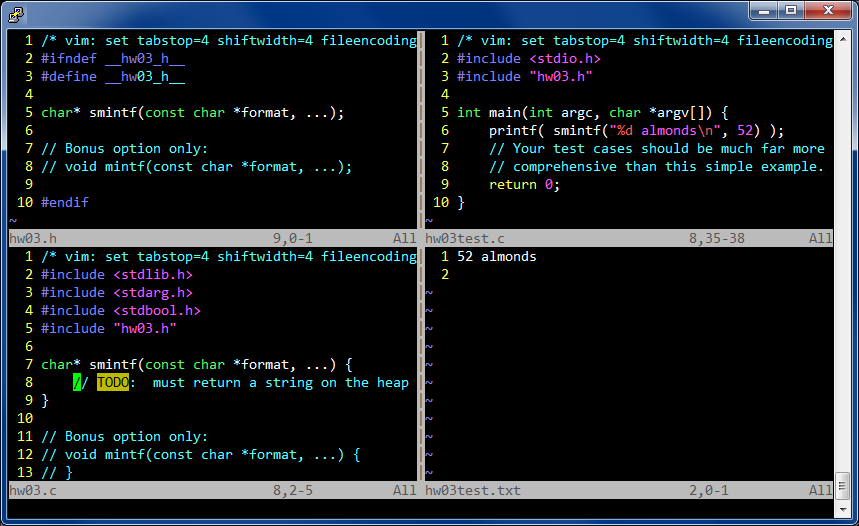 Note: The contents of the smintf and main in this illustration are not adequate and not entirely correct.

To test if your code works perfectly, you will run the following:
gcc -o hw03test hw03test.c hw03.c # compile your test together with your hw03.c to create an executable called hw03test
./hw03test > hw03test.output.txt # run your executable and send the output to a file called hw03test.actual.txt (That filename is arbitrary.)
diff hw03test.actual.txt hw03test.txt # compare the actual output with the expected output using the diff command

The following let you do the whole thing in one command.

You must also test for memory problems using Valgrind. To run Valgrind, compile your program and then enter valgrind --leak-check=full ./hw03test from bash. Details about the messages are on the course reference sheet.

It is expected that everyone will follow the test-driven development process (described in the HW02 description). We have no way to check this, but it will help you to do the assignment more quickly and with less frustration. If you ignore this, you do so at your own peril.

Keep your code clean (meeting the code quality standards) at all times. It should be properly indented at all times during the process. If you have warnings, fix them immediately. Course staff will not assist with code that is not properly formatted or has warnings (unless the warning is the issue you are asking for help with).

You are welcome to use your code from HW02 if you wish. However, if your HW02 code is messy (and it shouldn't be), then you should seriously consider starting from a fresh file. Modifying messy code is almost always more work than rewriting it.

This assignment—with or without the bonus option—will require a moderate modification of your hw02.c. The real work will be to understand pointers, and think about how to structure your code. The fact that you can only use malloc(…) once per call to smintf (and/or mintf), and that you cannot use realloc(…), make this harder than it might otherwise be.

This homework comes with a bonus option for to receive 2 bonus points. (That is roughly 60% as much as an entire homework. See the course policies for details). For the bonus option, you will create a smintf and mintf in one file that use the same code—i.e., call the same helper functions—to handle dealing with the arguments. The additional requirements for the bonus You will have one file (hw03.c) containing the following functions:

Hint: You can pass your va_list object to your helper function. This example code related to vprintf(…) illustrates how this looks.

Should I do the bonus?

The bonus option may or may not be more work. The instructor's solution takes the bonus option. Starting with his HW02 solution, he changed fewer than 50 sloc* to produce a working hw03.c with the bonus option. Of the 50 sloc that were changed, about 20 were trivial changes (e.g., converting references to fputc(…) and print_integer(…) into references to to multi-purpose helper functions).

The bonus option does not require any more advanced C programming knowledge than the non-bonus option. However, it will require a little more creative thinking to find a way to structure your code.

9/9: Added a screenshot of the starting point.

9/10: Clarification: The smintf and main in the screenshot are neither adequate nor entirely correct.

9/16: Clarification: Emphasized that the test case shown in the screenshot is not adequate or correct. (bold print, slightly clearer wording); added Q5 and Q6 to the Q&A