Reaching across the border: USA-Mexico symposium discusses big ideas for the future

The USA-Mexico border has its share of issues: from immigration and security to economic and ecological uncertainty. But there are many who see tremendous opportunities about to unfold. In a unique bilateral event organized by Purdue University, University of Texas El Paso, and Universidad Autonoma de Ciudad Juarez, experts gathered to discuss these big ideas in El Paso on day one, and then across the border in Ciudad Juarez, Mexico on day two. 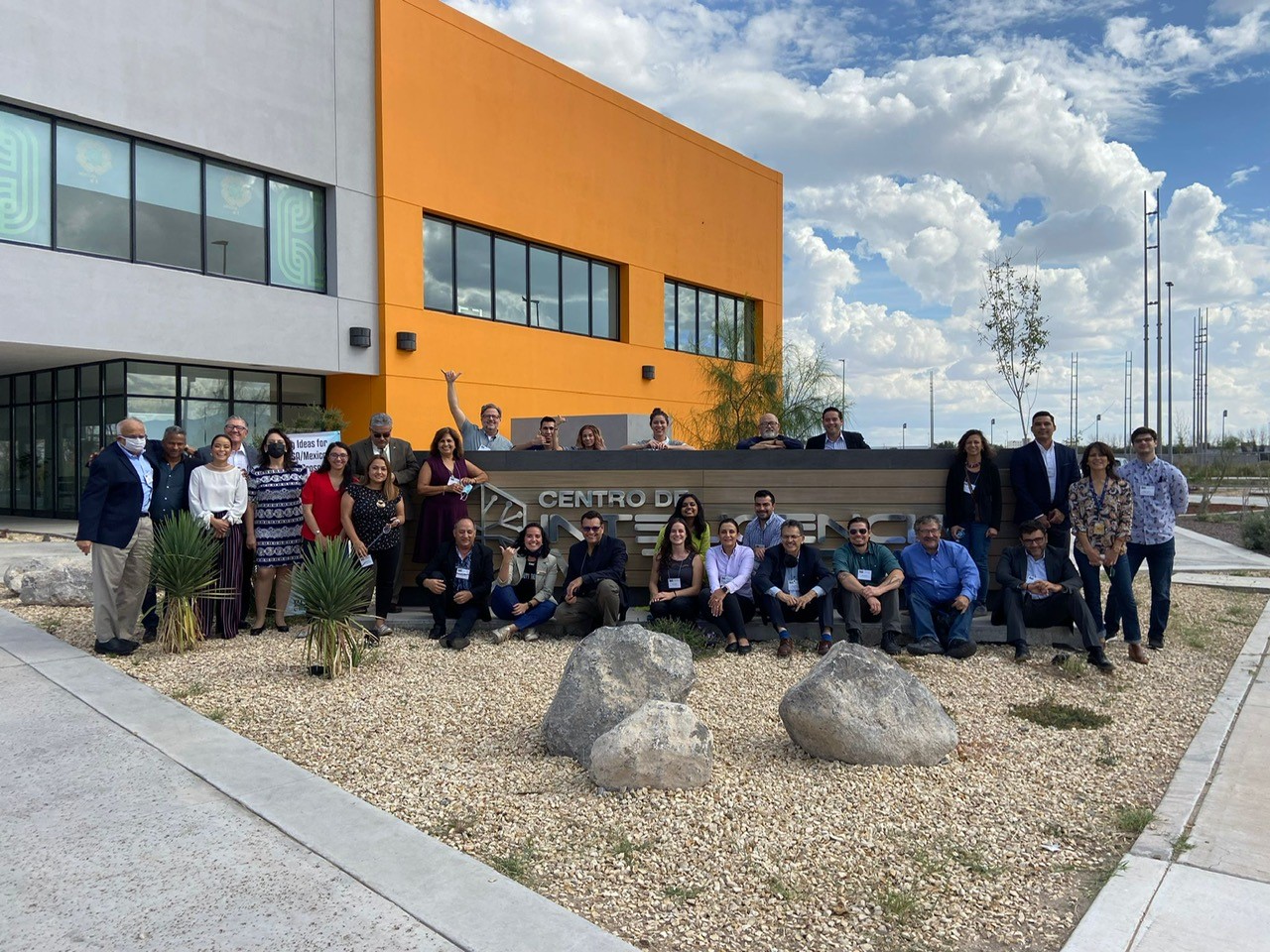 “We began this project focused on water security and renewable energy, but it’s become much more than that,” said Luciano Castillo, Kenninger Professor of Renewable Energy and Power Systems in Mechanical Engineering, co-chair of the symposium. “Our goal was to take a much more holistic look at how all the border issues are related, and how we can address them in multiple ways."

Luciano began his focus on the USA-Mexico border in 2019. As an expert in renewable energy, he knew that the southwest region of America had rich potential for solar and wind energy, and that it also lacked water resources. He proposed a bold solution: an energy corridor along all 2,000 miles of the border, with renewable energy powering desalination plants to bring water and agriculture to otherwise barren desert. In turn, this would provide much-needed economic development to the region, alleviating social problems in both countries while also bringing education and innovation to the border

To further explore the idea, he recruited David Zubia, Texas Instruments Foundation Professor in Electrical Engineering at University of Texas at El Paso, and José Mireles Jr., director of the Artificial Intelligence Center at Universidad Autónoma de Ciudad Juárez, to serve as co-chairs.  Together, they organized a symposium during September 2021 on Big Ideas for USA-Mexico Border Prosperity: On Sustainable Manufacturing. Experts from the United States, Central America, Canada and Mexico gathered to discuss all the issues involved: energy, water, security, migration, social issues, agriculture, sustainable manufacturing, and artificial intelligence. The first day took place at the University of Texas at El Paso; the second day across the border at Universidad Autónoma de Ciudad Juárez in Mexico.

“The symposium was a truly bi-national forum that highlighted the talent and tremendous multicultural exchange of activities and ideas that occur along the border region,” said Zubia, co-chair of the symposium. 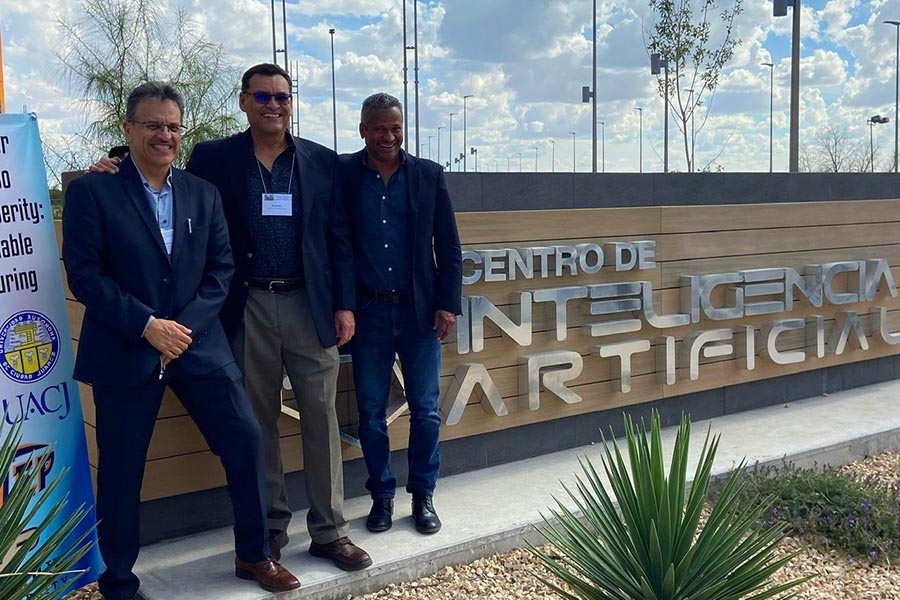 Jos Mireles Jr. (left), director of the Artificial Intelligence Center at Universidad Autnoma de Ciudad Jurez, is joined by David Zubia, Professor of Electrical and Computer Engineering at University of Texas at El Paso, and Luciano Castillo, Kenninger Professor of Renewable Energy and Power Systems in Mechanical Engineering at Purdue University, as co-chairs of the symposium.

“This was a big risk, because we didn’t know what the COVID protocols would be by the time of the event,” said Luciano. “The Mexican border was open to American visitors, but the American border was closed to Mexican visitors. So, like many things during COVID, we had to adapt. We streamed the video on both sides, allowing people to participate both in-person and virtually. We welcomed about 50 people in person, and over 150 people virtually.”

Jay Gore, Reilly University Chair and Professor of Mechanical Engineering at Purdue University stated, “The 2021 symposium was a meeting of the hearts and minds networking to move forward with novel economic, cultural, environmental, and educational ideas for the El Paso and Ciudad Juárez communities.”

The opening comments, given by Mung Chiang, the John A. Edwardson Dean of the College of Engineering, and Mark Lundstrom, Don and Carol Scifres Distinguished Professor of Electrical and Computer Engineering, focused on something you might not consider in regards to the USA-Mexico border: microprocessors. “Microchips are a perfect example of the kind of manufacturing that could transform the border region,” said Castillo. “Look at what COVID did to our supply chain. Why are we relying on overseas factories to create the microchips that power every aspect of our economy, when we could have everything we need to do that manufacturing right here along the border?”

Microsoft, who co-sponsored the event, discussed their innovation campus they are building in Ciudad Juárez. “It was fascinating to hear how they use big data and artificial intelligence to solve problems,” said Castillo. “Imagine if we could put that to work to analyze climate change, mass migrations, inequality and other pressing issues. For example, if we deployed renewables along the border, how would that affect migration both to and from the region?”

Another interesting panel paired Frank Dooley, the chancellor of Purdue University Global, with Juan Alfonso Fuentes Soria, former Vice President of Guatemala. “We’ve seen in the last year how vital remote education has become,” said Castillo. “If we could harness what Purdue Global has done, and leverage it with our work along the border, it could have ripple effects for all borders. It could serve as an example not just for Central America, but in the Middle East, Africa, Asia, and everywhere else where there are migrations and conflicts.”

On the event’s second day, the American attendees walked across the Bridge of the Americas in El Paso to join their colleagues at Universidad Autónoma de Ciudad Juárez. According to Castillo, the act was more than just symbolic. “When you have to speak to someone in a different language, it really makes you listen to catch everything,” he said. “That also applies if someone has a different area of expertise than you. Your listening becomes much more intentional, and you end up learning a lot from others. Many of our speakers live every day along the border, so they understand these issues in a unique way. They were so happy to host us, and I was so impressed with the environment and quality of talks there.”

“We were proud to host this symposium in Juarez," said Mireles, co-chair of the symposium. "We gathered much talent and discussed interesting talks related to binational challenges of water issues, precision agriculture, energy issues, sustainable industry, semiconductor manufacturing, economic development, workforce development, artificial intelligence and digital transformation, among others. All these issues were discussed in a friendly environment surrounded by a strong willingness to collaborate.”

Irasema Coronado, Director and Professor, School of Transborder Studies, Arizona State University said, “As a border resident, it is always wonderful to welcome people to 'la frontera' and to share our bilingual, bicultural and binational way of life.  This symposium afforded participants the opportunity to meet on both sides of the border and to experience how integrated and interdependent the border region really is. I hope that everyone who attended the symposium can serve as ambassadors and promote the positive aspects and opportunities that the border region represents.”

"The motto of this project is, 'Think big and you will get big results,'" said Angeline Fournier, President of Maeva Investments. "I was inspired to contribute on the theme of energy to this extraordinarily interesting and creative two days of brainstorming. We want to develop concrete ideas and a plan to contribute to shared prosperity and sustainable manufacturing in the El Paso/Ciudad Juárez region. Thank you to Purdue University and Dr. Luciano Castillo and team for taking the lead of this great initiative."

“It was one of the best meetings I’ve ever attended,” said Castillo. “Water security alone is reason enough to tackle this project. But even beyond renewable energy; beyond water security; beyond job creation; we have the ability to address serious social crises and have a positive impact on thousands of lives. Engineering and social science have the power to make a real difference here.” 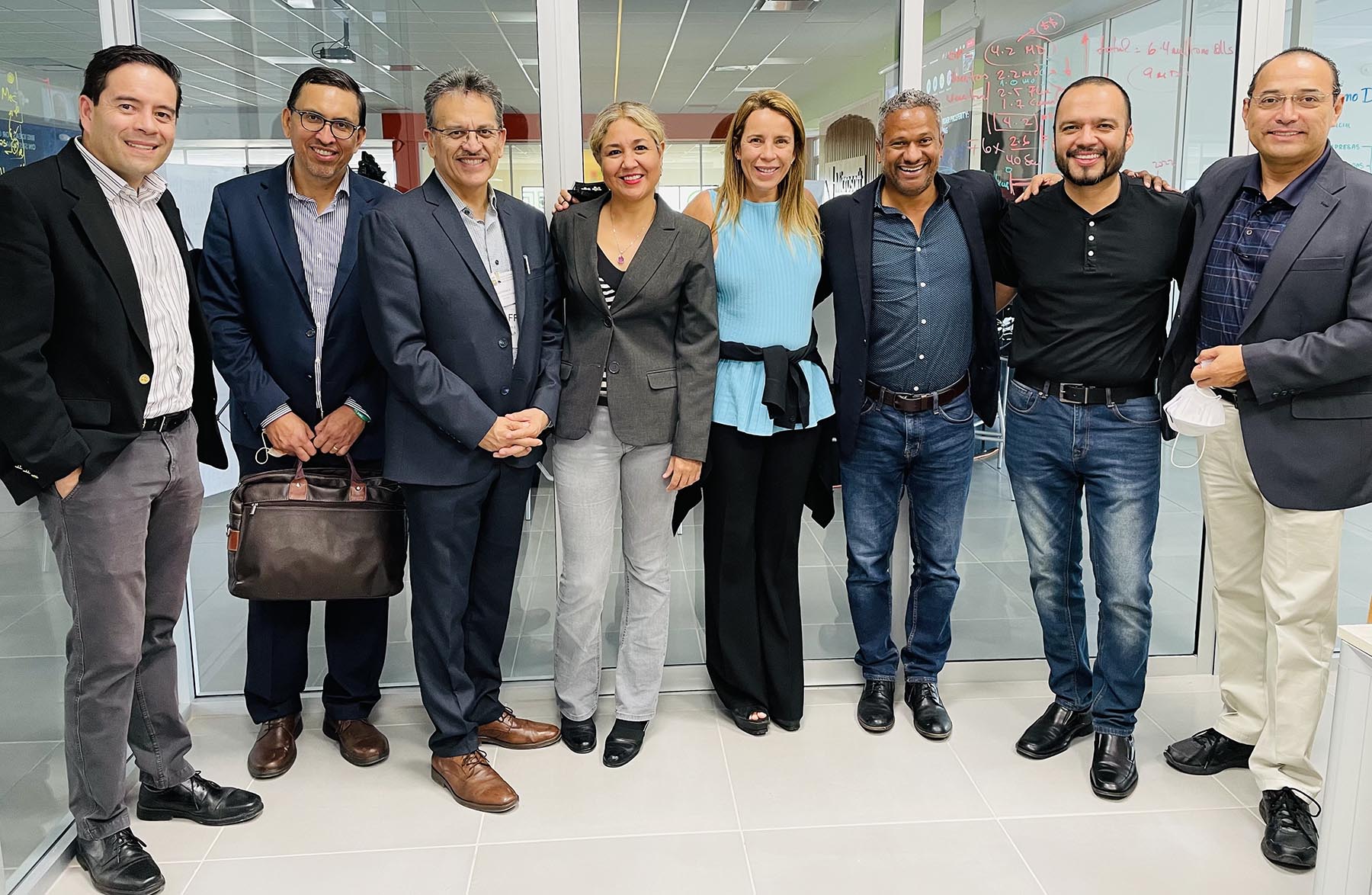 Shortly after returning from Ciudad Juárez, Castillo took place in another cross-border event. He was inducted into La Academia de Ingeniería México, the Mexican equivalent of the National Academy of Engineering, for his continued efforts regarding the USA-Mexico border.

“This event had to happen remotely,” said Castillo. “All the conversations from my new friends in Ciudad Juárez were still resonating with me. That’s why I chose to make my speech in a building named after Neil Armstrong (a Purdue grad and first man to walk on the moon) in front of a photo of Hoover Dam (which was engineered by a Purdue grad). I wanted to show that Purdue has the power to make big ideas a reality. Working together, the USA-Mexico border will be our biggest success yet.”