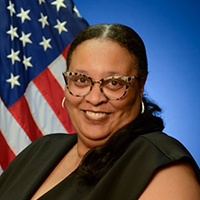 Since joining the Air Force as a civilian in November 1989, Mrs. Robinson has served in several roles in the Aeronautical Systems Center and the Air Force Research Laboratory including avionics design and laser optical communications design engineer, business and financial management, strategic development planning and programming. Prior to her current assignment, Mrs. Robinson was Deputy Program Manager in the STEM development office where she developed an AF wide K-12 AF STEM Outreach education program establishing policies and programs to interest K-12 students in STEM academic studies and careers of AF mission needs. She was instrumental in establishing the AF blueprint in the DoD STEM portfolio. She also co-authored with her DoD sister services STEM workforce development initiatives for near, mid, and far term.

She has used her depth of experience in strategic planning, budgeting, and execution in forecasting specific STEM needs vital for the future workforce as it relates to DoD and DAF missions.