When Dennis Clark (BSIE '72) returned to campus in early 2014 to speak to a group of Industrial Engineering students, he was surprised to find himself in familiar surroundings.

"Grissom Hall hadn't changed much since I attended Purdue in the early 1970s," he says of the building that houses the School of Industrial Engineering. "It looked very institutional and didn't fit with the vision I knew the University had for IE."

We want to avoid new construction when possible and instead re-envision these older buildings. It's the sustainable thing to do."

Not long after that visit, Dennis and his wife, Ellen, began exploring legacy gifts to Purdue and Butler University, where Dennis received his MBA and where Ellen worked for 22 years. When they learned that Grissom Hall was due for transformation, they knew they had found the right opportunity to give back to Purdue.

"The School of Industrial Engineering has always been nationally ranked academically," Dennis says. "But when you look at today's students, their needs are different than mine were 40 years ago. It's time for Purdue to upgrade its facilities to meet those needs."

Built in 1906 and later named for Purdue alumnus Virgil "Gus" Grissom, who died during the 1967 Apollo 1 fire, Grissom Hall wasn't designed for today's teaching and research methods - nor was there room for the increasing numbers of students and dozens of new faculty and staff members being hired as part of the College of Engineering's Strategic Growth Initiative.

So, in summer 2014, the building's interior was gutted and modernized. The re-envisioned Grissom Hall reopened for classes in fall 2015. (During construction, IE was located in temporary space on the fourth floor of Seng-Liang Wang Hall.) Today, updated classrooms allow for active learning. Collaboration and teaming rooms encourage student and faculty interaction. Modern air-handling, electrical and lighting systems improve energy efficiency.

"We want to avoid new construction when possible and instead re-envision these older buildings," says Robert Frosch, associate dean of engineering resource planning and management and professor of civil engineering. "It's the sustainable thing to do, and it allows us to maintain the character of the buildings and the University." 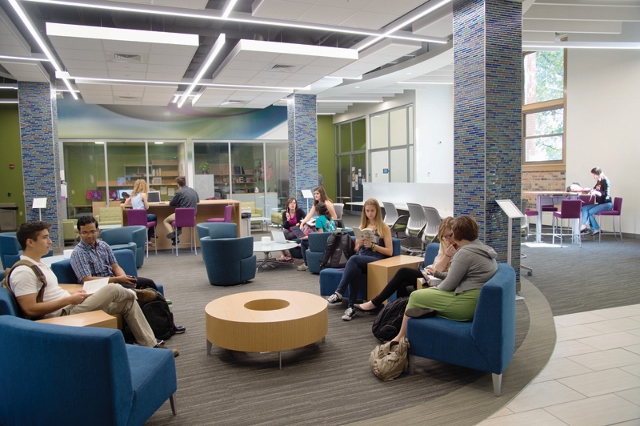 Also part of the project was a new administrative suite for Industrial Engineering that houses development and administrative offices and an office for Abhijit Deshmukh, the James J. Solberg Head and Professor of Industrial Engineering. The suite, located next to the new student commons and advising offices, provides a seamless connection between IE students and their educational mentors. That appealed to the Clarks, who made an estate gift to fund the administrative suite, which is named in their honor.

"My advisor at Purdue was Dr. Ferdinand Leimkuhler, the former head of Industrial Engineering, so I spent a lot of time in that office," Dennis says. "It was a good fit."

For Ellen, who spent her last 10 years at Butler as executive assistant to the president, there were practical considerations as well. "I saw firsthand how important it was for students to have contact with their administrators and have a private place to communicate," she says.

The Clarks' support of Purdue dates back long before the Grissom Hall rejuvenation. They have made annual financial contributions since they were married in 1973 and are longtime supporters of Boilermaker football and basketball.

"While we both are avid Boiler sports fans, it wasn't my athletic ability that allowed me to be successful," Dennis says with a smile. "The education I received at Purdue was the steppingstone to many opportunities. I've always felt it was the perfect combination of technical, business and people skills."

That combination led Dennis to a 34-year career at Eli Lilly and Co. in Indianapolis, a job that took him to sites around the United States and Canada, as well as a 2 1/2-year stint in Ireland before his retirement in 2007.

In 2004, with matching funds from the Lilly Foundation Matching Gifts Program, the couple endowed the Dennis M. and Ellen A. Clark Scholarship in Industrial Engineering, which supports one or more undergraduate students annually - with preference given to residents of Indiana or the Midwest. In 2015, the Clarks made an additional contribution toward that scholarship through an estate gift.

"We hope it benefits folks like ourselves who come from a humble background," Dennis says. "We believe in paying it forward and helping kids fulfill their dreams and ambitions."

To lend your support to Grissom Hall or to other Industrial Engineering initiatives, contact Jerry Alberts, director of development, at 765-496-6192 or JLAlberts@prf.org.