The Dr. Allen S. Novick AAE Distinguished Indiana Student Scholarship
Four decades after he walked the hallways of Grissom Hall as a student, the late Allen Novick stepped back into a Purdue classroom. But this time, he was the one behind the lectern.

In 2010, Novick (BSAAE '65, MS '67, PhD '72) returned to campus to teach a seminar designed to help aeronautics and astronautics seniors prepare for their careers. Recently retired from his position as vice president of marketing intelligence and support at the Rolls- Royce Corporation, Novick gave students an insider's perspective into the aerospace industry.

He embraced his role as the department's first and only honorary industry professor and stayed in touch with students who contacted him after the seminar for advice about job applications. His sessions became so popular that students requested the addition of a second seminar for sophomores. 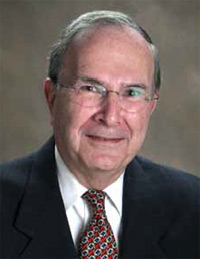 "Professor Novick wanted the best for Purdue students, and he was incredible about following up with people."

Novick always looked for opportunities to connect with students, whether in the classroom or at a game. In 2010, Novick met Brooke Beier, a former Purdue tennis player and biomedical engineering PhD student, at a John Purdue Club event. He struck up a conversation with Beier, and turned a brief introduction into a mentorship. As she began to search for a job, Novick became an enthusiastic networker on her behalf.

"Professor Novick wanted the best for Purdue students, and he was incredible about following up with people," Beier says.

It was no surprise that students were drawn to Novick. He approached the seminars like he approached his life, with an emphasis on mentorship.

In the years ahead, Novick's contributions to Purdue students will continue through the Dr. Allen S. Novick AAE Distinguished Indiana Student Scholarship. Since he passed away in 2012, Novick's friends and family have missed his optimistic spirit and his ability to see the world as full of possibilities.

"He was always positive," his longtime friend Betsy Spencer says. "He looked for silver linings with the opportunity to facilitate colleagues and friends to be successful."

Novick's friends and family created the scholarship as a way to continue his desire to help the next generation succeed by providing opportunities for Indiana students to study at the School of Aeronautics and Astronautics.

"It was very important to my dad to help people coming up in the field," his daughter, Michelle, says. "He found joy in mentoring those starting out in aeronautics."

To Novick, mentorship was more than just giving advice. It was about teamwork.

His team at the Detroit Diesel Allison Division of General Motors, later a division of Rolls-Royce, achieved key milestones over the years. Its greatest accomplishment was the creation of the AE Common Core engine family, a single-core machinery used for multiple engines. This development was an industry first, reducing costs for customers and broadening the reach of Novick's team to new aircraft markets.

He was honored for his accomplishments with awards including the prestigious Collier Trophy, which recognizes the greatest American achievements in aeronautics and astronautics, and Purdue's Distinguished Engineering Alumni Award.

When he accepted Purdue's award in 2006, he emphasized the importance of working with others to achieve a goal.

"It's teamwork that gets the job done," he often said.

Novick saw himself as part of a larger team not only in his workplace, but also among the community of Purdue alums.

In 1972, when Novick finished his PhD and started work at the Indianapolis offices of the Allison Division, he and his wife, Phyllis, and their children, Kent and Michelle, made their home in Lafayette. The Novicks wanted to be a part of the University community and adopted campus traditions as their own, from the Purdue Christmas Show to the Homecoming parade.

Novick showed his Boilermaker pride at football and basketball games, and though he held season tickets since his time as a student, he wasn't one to just sit on the sidelines. He also helped to financially support Purdue's student-athletes through his involvement with the John Purdue Club.

The Dr. Allen S. Novick AAE Distinguished Indiana Student Scholarship will ensure that future Purdue students have the tools to succeed, and because the scholarship is part of the University's Indiana Challenge Match program, the opportunities for in-state students to study at Purdue will be multiplied.

It's a fitting tribute to Novick, whose legacy will continue in Purdue's classrooms for years to come.