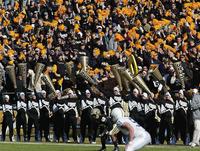 On any given football Saturday, after a Purdue game, Irene Binash’s parents would call her and cheer, “Purdue’s No. 1!” into the phone. Due to her parents’ enthusiasm for Purdue sports and support during her undergraduate years, Irene and her husband were inspired to establish an endowment in their honor.

“The P&T program, coupled with ExxonMobil’s equally generous match, provided a way to give back to Purdue at a level I had not previously considered,” says Binash.

“These scholarships are so important because they allow us to continue to be competitive in recruiting the best and brightest to Purdue engineering.”

The Peter and Victoria A. Hoysan Purdue’s #1 Scholarship is granted to an undergraduate student majoring in chemical engineering and participating in the Women in Engineering Program.

As a student, Binash participated in the WIEP and was influenced by guest speakers.

“I learned a lot from the professional female engineers who were invited to speak to us,” says Binash. “These women illustrated that there are many different avenues available to graduating engineers, and they encouraged me to explore all options.”

After earning her bachelor’s degree in chemical engineering and her master’s degree in management from Purdue, Binash began her nearly 30-year career with ExxonMobil Chemical. She is currently the global supply chain planner for Specialty Elastomers and has held a variety of positions throughout her time with the company.

Madonna Wilson, director of development for the College of Engineering, stresses the importance of scholarships like the one provided by Binash.

“These scholarships are so important because they allow us to continue to be competitive in recruiting the best and brightest to Purdue Engineering,” says Wilson.