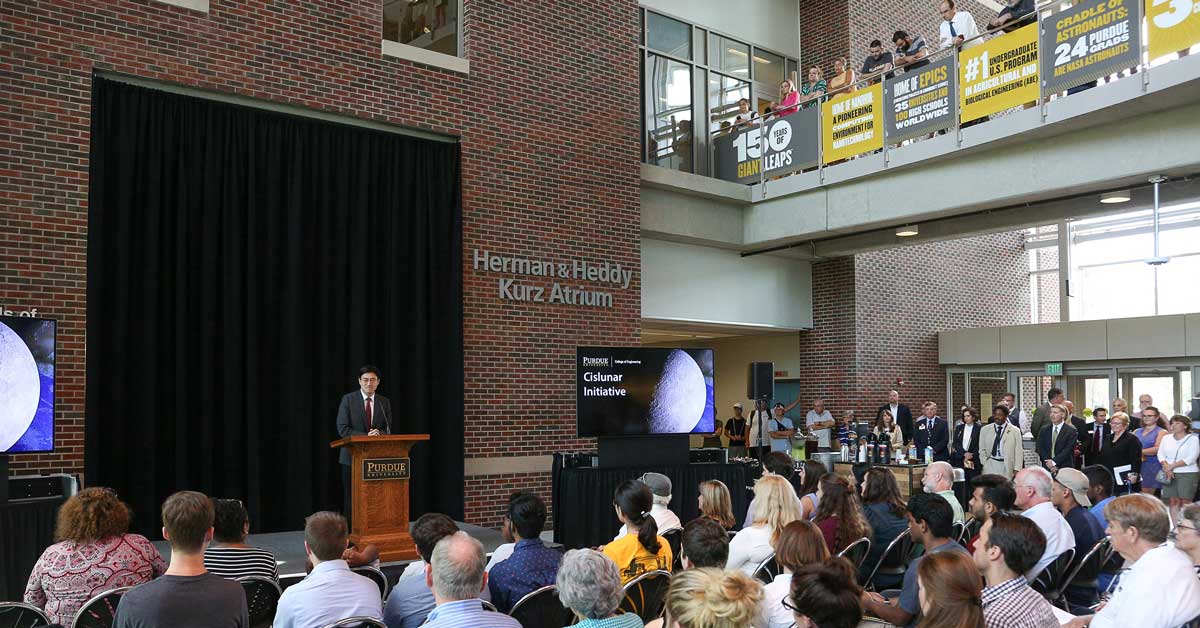 Mung Chiang is the President-Elect of Purdue University and the Roscoe H. George Distinguished Professor of Electrical and Computer Engineering. From July 2017 to June 2022, he was the John A. Edwardson Dean of the College of Engineering. Since April 2021, he has been the executive vice president for strategic initiatives. As the engineering dean, he led the college to its first back-to-back top 4 graduate ranking in the U.S. while growing it to be the largest top 10 undergraduate engineering college in the country. Undergraduate admissions selectivity, yield rate, and graduation rate, as well as women and minority enrollment percentages, all achieved new records. Online program size more than quadrupled while the ranking advanced to top 3 in the U.S. New degrees were launched, and Professional Master’s enrollment more than quadrupled too. Annual research awards surged over 70% in five years, including the largest federal funding and the largest industry funding awards in college history and 12 national research centers headquartered at or co-led by Purdue. Patent applications increased by about 40%, and the college contributed to Purdue’s Ever True Campaign in excess of $1B. The “Pinnacle of Excellence at Scale” is further supported by 15 facility construction or renovation completed since 2017, including the Gateway Complex. As an EVP of the university, he worked with many colleagues to help launch the initiatives in national security technology and in semiconductor and life science manufacturing, in Discovery Park District’s aerospace cluster and the Lab to Life platform, and in economic growth through federal, state, and private sector opportunities.

Previously, Chiang was the Arthur LeGrand Doty Professor of Electrical Engineering at Princeton University, where he was the inaugural Chairman of Princeton Entrepreneurship Council and Director of Keller Center for Innovation in Engineering Education. He helped launch the entrepreneurial programs at Princeton and was named a New Jersey CEO of the Year (2014). He received B.S. (Hons.) in electrical engineering and in mathematics, and M.S., and Ph.D. in electrical engineering, from Stanford University.

As a researcher, Chiang received the Alan T. Waterman Award (2013), the highest honor to an American researcher under the age of 40 each year. His pioneering work in edge computing, network utility maximization, and wireless resource allocation also received IEEE INFOCOM Achievement Award (2022), Guggenheim Fellowship (2014), IEEE Kiyo Tomiyasu Award (2012), Presidential Early Career Award for Scientists and Engineers (2008), and MIT Technology Review TR35 Award (2007). His research publications on Internet congestion control and routing, wireless power control and scheduling, cloud and video optimization, smart data pricing, and social learning networks have received over 30,000 citations with an H-index of 81, and won the Best Paper Prizes at IEEE INFOCOM (2012), IEEE SECON (2013), and ACM MobiHoc (2021). He was elected to the National Academy of Inventors (2020) and the Royal Swedish Academy of Engineering Sciences (2021).

As a teacher, Chiang received the Distinguished Teaching Award in Engineering (2016) at Princeton University for creating an interdisciplinary undergraduate course, flipping classroom, and teaching one of the university’s first Massive Open Online Courses that has been taught to over 400,000 people. His textbook “Networked Life” (2012, Cambridge University Press) received the ASEE Frederick E. Terman Award (2013) and an American Association of Publishers PROSE Award (2012). He has graduated more than 50 Ph.D. students and postdocs, including 24 who have become faculty in research universities.

As an inventor and entrepreneur, most of Chiang’s 25 U.S. patents have been licensed and deployed by the communications and networking industry. He co-founded three startup companies in mobile networks, artificial intelligence, and the Internet of Things, based on the research at Princeton Edge Lab, and co-founded a global nonprofit, the OpenFog Consortium, now part of the global Industrial Internet Consortium. He was the founding CEO of DataMi, which has served over 60 million users around the world in bridging the digital divide.

As a diplomat and policy-maker, Chiang was the Science and Technology Adviser to the U.S. Secretary of State and initiated the U.S. government’s tech diplomacy programs. Since returning from Washington D.C. in 2020, he co-founded the Krach Institute of Tech Diplomacy at Purdue, and serves as the Technology and Innovation Advisor to his home state of Indiana.