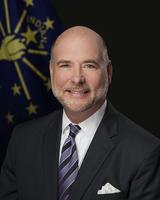 Republican Leader and Speaker of the House,  Indiana House of Representatives

Brian Bosma grew up in a family that placed a high premium on public service. His father, Charles Bosma, was enrolled in the Purdue Chemical Engineering Program in the 1940s but was called to fight in World War II. When he returned from the war, like so many others of that generation, Charles believed they could change their communities just as they had changed the world. Charles Bosma’s journey to serve his country on the battlefield led him to the state capitol serving in the Indiana Senate for 21 years and making a deep impression on Brian, who would later follow in his father’s footsteps. Though before there was a passion for law and politics, Brian had a love of engineering that sprang from his boyhood dreams.

Brian grew up in Beech Grove, Indiana, a rural suburb of Indianapolis in its time, in the family dairy business. He was born a month after Russia launched Sputnik, the world’s first artificial satellite. As he grew up in this new space age, he recalled, “It was made very clear that those of our generation talented in science, technology, and mathematics were going to address the Cold War crisis and the race to space.” As he grew up, his parents made it abundantly clear he was going to be a Purdue engineer.

Upon entering Purdue, Brian wasn’t sure which discipline of engineering to choose but was drawn to civil for his love of construction and building. He was also passionate about history and political science, and he knew he wanted each of these disciplines to be part of his education and maybe even part of his profession. With not quite enough credits for a civil engineering degree and over fifty credit hours in the College of Liberal Arts, he learned about the Interdisciplinary Engineering Studies program that would allow him to combine the two areas of his passion. He met to discuss his options with Dr. Dick Grace, who Brian acknowledges as a big influence for him while at Purdue. Dr. Grace encouraged Brian to put together a combined program to submit to the faculty for review and approval. His approved plan, found only recently in a folder containing Brian’s Purdue memorabilia, stated he wanted an engineering degree but wanted to stand at the intersection between the professions of engineering and law. Unique yet critical, it would provide training in both professions, enabling engineers to talk about their legal issues to an engineering-trained attorney.
His IDE personal plan of study, along with his law degree from Indiana University, accurately predicted what Brian still does today. His law practice focuses on construction, both contracting and issues during construction, and dealing with environmental issues, which was the emphasis of his Interdisciplinary Engineering degree. How unique is an engineer who practices law? It is fairly rare, but of the nineteen attorneys at Brian’s firm, there are four who have engineering degrees. Brian’s response to those who ask, “What I truly appreciate is that I can see solutions in black and white, and I can also see in shades of gray, understanding that there may be a mathematical and science application where there is definitely a right answer, but as in law, there could be a lot of right answers. One approach informs the other and it has made me a better lawyer, a better public policy maker, and it certainly adds to my personal and professional credibility.”
You could say the rest is history, or better yet, making history. After two years into his law practice, he was asked by H. Dean Evans, the Superintendent of Public Instruction and a personal friend of his late father, to serve on his staff and help him with legislative matters.  Without hesitation, Brian took a sabbatical from his practice. “It was built in by our parents that you had to find a way to give back,” stated Brian. So when an opportunity came to run for office in 1986, he ran and has now served in the General Assembly for over 30 years. Brian is the longest-serving Speaker of the House in the state’s history, beginning his fifth, two-year term in 2017. He said he has had a great experience helping change Indiana. The best eight years of his political life were when he and Purdue’s President Mitch Daniels, then governor of Indiana, collaborated, two newly elected officials, to change the course for the state of Indiana in so many ways. “And we did it,” reflected Brian. “I enjoy what I’m doing. I can impact lives; I can still practice law. It’s great to make a difference for people,” said Brian, smiling.

FIND A WAY TO GIVE BACK

Brian, along with his family, is also impacting lives with a foundation near and dear to their hearts. To preserve the legacy of his father, who had a real heart for the disabled and had two statewide programs named after him after his passing, Brian established Bosma Enterprises, a nonprofit organization that would take over the state’s responsibilities for both programs. Today, Bosma Enterprises oversees the Charles E. Bosma Rehabilitation Program that employs nearly 200 employees, 75% of them blind or visually impaired, and provides rehabilitation services all over the state. “It truly is a privatization success story,” said Brian.

Brian is married to Cheryl, whom he met at Purdue while she was earning her degree in communications and public relations.  They reside in Indianapolis, Indiana. Their children, Allison and Christopher, are also Purdue alumni. Christopher is a second-generation Engineering Education graduate, one of our past student honorees for academic excellence and is in IU Medical School.  Allison is a Master’s Degree candidate and chef in Fort Collins, Colorado.